A Certain Modicum Of Sleep Until Big Game!

Share All sharing options for: A Certain Modicum Of Sleep Until Big Game!

IT'S BIG GAME WEEK, BEARS! LET'S GET THIS PARTY STARTED! Many Cal fans get really riled up about Stanford stuff! And many Stanford fans notice that a football team exists and maybe they should go to a game. Or finish their chem lab. One of the two.

So, while Stanford fans' idea of Big Game spirit might mean emerging from their Genentech Start Up for a moment to a)see the sun and b)enjoy the concept of a competitive (sometimes) football competition, many Cal fans actually care. Those Cal fans they like to show their Big Game spirit by pulling pranks on Stanford (and on rare occasion, Rally Comm, because those guys are always asking for it). Of course, the most epic prank was the Phoenix Five (interviewed here). However, there are, we're sure, many, many crazzy stories out there. So, tell us your story! The crazzier the better.

Reader LeonPowe has been so kind as to write up one of his adventures from a trip to Stanford. It involves stenciling, wild car chases, and, surprisingly, alcohol. Didn't see that last one coming, did you? Enjoy the story and tell us your stories in the comment. GO BEARS! BEAT THE CONCEPT OF THE COLOR RED ALONG WITH TREES!

It was the week of November 21, 1992.
It had been a disappointing Cal football season - more than most, as we had high expectations coming into the year (finishing 1991 ranked #7 overall, with Heisman hopeful Russell White, a powerful offensive attack led by QB Dave Barr and wideout Sean Dawkins and a tough, aggressive defense with Jerrott Willard manning the middle. It all fell apart in year 1 under new Coach Keith Gilbertson as Cal limped to a 4-6 record.
No matter. It was Big Game week, and what did that mean? We were going to take an axe to Stanfurd's Glyn Milburn and Ellery Roberts. We were going to beat f'ing Bill Walsh and his West Coast offense. And we were going to pull pranks on the Farm.
In the few weeks before, a secret organization had been recruiting connected students in order to pull off a big prank against the Furd. This organization went by the name of "B.U.S.T." - Burn the Ugly Stanfurd Tree. Various ideas were discussed. (Painting the "South San Francisco: The Industrial City" - highlighting the C, A, and L. Drapeing a banner across the Oakland Bay Bridge. Painting all the signs around Palo Alto so that they said "Stanfurd" Eventually all the big ideas fell by the wayside, as it was decided to paint a bunch of stenciled Bear Claws around the Stanfurd campus.

My friend and I received invitations to show up at a house located somewhere in Berkeley at midnight. When we got there, the other 10-15 people were already deep into beverages. Well, except for those that were driving. We got split into 5 or 6 different cars - my friend and I got split up as they decided having two freshman in the same car would be really dumb - and as no one in my car was sober, except me, I got nominated to drive. Which would have been great, except I had never driven a column shifted car before.
There may have been additional drinking on the ride down to Palo Alto, I'm not sure, but I belated realized that this was a huge "not wise" move on my part to be driving down with a car full of drunks, a trunk full of spray paint and stencils and a backseat full of empties.
We arrived at Stanfurd around 2am, and our crack squad of Bear Claw painters went to work. I waited in the car, while they went off to paint Bear Claws. Luckily one of the members in our car had worked on the Stanfurd campus last summer and knew the whole layout pretty well.
They hadn't been gone for more than 30 seconds when, there was a flurry of rushing and then "GO GO GO! DRIVE!" was being yelled in my ear and I just stepped on the gas. Apparently they had chosen a spot right underneath a dorm window and some woman opened it at 2am and said "Hey, stop it you guys!"
Some more driving around and we find a second and third and fourth spot, which resulted in similar results as the first. It was around this time I realized that completely drunk spray painters probably equal the opposite of stealth.
By this time, our intrepid crew had spent 40 minutes driving around the Stanfurd campus and had laid down a total of 4, yes 4, sets of Bear Claws.
For our fifth set, the pattern repeated, but this time the running back to the car was more panicked. and they were shouting in my little freshman ear "DRIVE DRIVE GODDAMMIT JUST GO GO GO!!!" So I burned rubber (literally!) took off with no lights on, blew by another Cal car (apparently - we found out the next day - the other car also reported that the campus police car was just around the corner too) and we were being chased by a huge truck. Apparently it was also initiation week down on the farm and all the Stanfurd frat guys were out that night doing, well, whatever it is that Stanfurd frat guys do during initiation.
After about 5 minutes of chase, and some panicked driving I ended up in a dead-end parking lot and face to face with the truck. I have to emphasize, it really was a car chase - like one they'd interrupt "Meet the Press" for on Sunday mornings. (I swear to God this story is true). I popped on the headlights - all I could see was they were driving a big pickup truck - it was one of those that wouldn't be out of place in the Central Valley or the South. Jacked up with big tires, they popped on their roof lights and shouting something at us - something about getting out of the car. I revved our engine, but was scared to the point of peeing. Then from behind me "JUST GO! GUN IT!!!!!" I took off straight at the truck, I think they panicked, I aimed straight at the front tire, then turned the wheel right at the last minute, then I'm hearing directions and I'm wired in "RIGHT, LEFT, RIGHT" I was like a rally car driving. Totally in the moment, and I'm driving like I've never driven before. 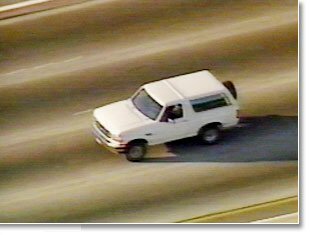 
Finally we made it to a gas station. Adreline is pumping 100 miles an hour. The owner of the car says "Let me drive all the way home. I'm 100% sober now. Completely."
Drive all the way back to Berkeley - arrive back at 4am. Go to sleep, arrange to meet my friend for late breakfast at the DC (left a note on her door). She meets me there, looking very bright and chipper. As I relay the events of the evening past, she goes "Oh. Nothing exciting happened to us, we painted about 200 Bear Claws, and didn't see any Stanfurd students. Just got back to Berkeley around 6am."