Calcuating the percentages for who wins the Pac-10 title wasn't easy. There are a lot of complicated scenarios out there involving four legit contenders and one dark, burning, empty Trojan horse (yes people, Cal was officially eliminated last week with Oregon smashing ASU. Until next year...).

Anyway, for those who just want the approximate percentages, here they are.

Well well well. Could the Civil War end up being the Rose Bowl battle?

Explanations for how this could happen, as well as for the numbers (and why it's not fully 100%*) after the jump. Plus ragnarok stops by and we have a brief rundown about whether the Pac-10 will get two BCS bids.

Thanks to this nifty little gambling calculator (which translates spreads into winning percentages), I was able to calculate the relative chances of each team winning its games based on the lines set by Vegas. Since the lines haven't come out for any games past this Saturday, I went ahead and guesstimated the lines based on previous figures. I totally expect these lines to shift a little, but I'm fairly confident that if the lines came out today these would be about the current figures.

I did have to adjust it for the super ridiculous Wazzu lines, which had the odds of Oregon State beating Washington State this week at 127% (that figure's probably accurate, but some Poindexter out there would complain).

Now onto the fun part--the probabilities! Big thanks to bruinhoo of Bruins Nation for breaking down all the realistic possibilities. 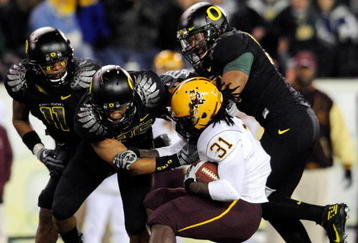 Obviously, the Ducks fate is in their own hands. They'll be favored in their final two games (albeit not by huge margins). The -9.5 line seems high against Oregon State, and I'll probably lower it after this week when the Beavers dismantle Wazzu, but we shouldn't take this line too seriously since the underdog covered the last three years.

Fall behind early to Arizona Saturday night though, and their fate is almost ironically placed into the Bears's hands. If Cal holds onto the Axe and knocks the Furd out of the picture, the Ducks are still very much in the hunt; a Furd win sinks them into the abyss, since they'd lose a straight tiebreaking scenario with the Cardinal and whatever Arizona throws into the mix. 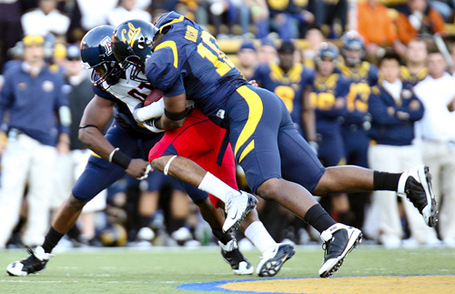 Last week's trip to Memorial was a deathblow to the Wildcats Pasadena dreams. Although Arizona's loss does not prevent them from controlling their destiny, falling to Cal now means every game is an elimination one now. Oregon beating Arizona would take them out of the hunt (the Ducks would only lose two conference games at that point), so they have no choice but to win their final three. Their chances do leap up if they win next week though, although the final game at the Coliseum still will depress their overall hopes at a New Year's Day trip.

So despite the fact that Arizona controls its own fate and requires no outside help, they have a far weaker chance of making it to the Rose Bowl than their counterparts in Corvallis and Palo Alto. They are current underdogs against Oregon and will probably be around a touchdown underdog against USC depending on how they recover against UCLA, and their rivalry game in Tempe is no pushover either. 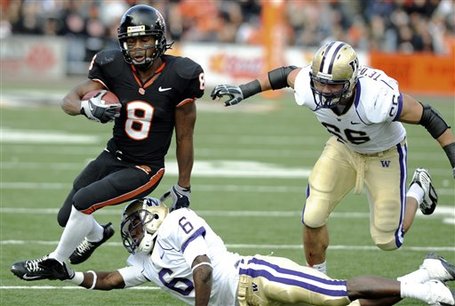 USC's loss last week surprisingly helped out the Beavers the most, since almost any tiebreaker procedure with the Trojans involved would have eliminated Oregon State from the running. Now, all the Beavers have to do is knock off Wazzu (slightly manageable), root for Oregon--for just one week--or Arizona State to knock off Arizona, and the Civil War becomes the winner-take-all matchup.

This would be a classic Mike Riley situation, since the Beavers flew under the radar all season after being inflated with coverage last season, and falling apart in the Civil War in a bid for the Rose Bowl to Oregon. Now it's the Ducks who've been in the limelight all season. Can they handle it differently? 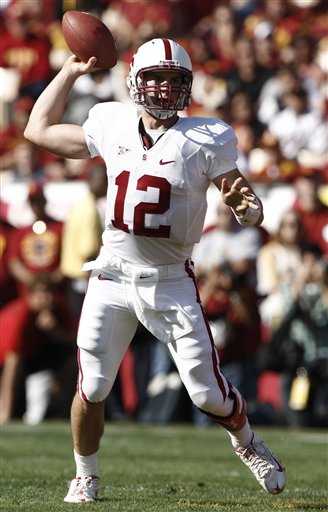 Despite two smashing wins against the class of the conference, earlier failures against Arizona and Oregon State put the Furd as the third horse in the race. The best scenario is a Yojimbo situation--Arizona beats Oregon (knocking the Furd and Oregon into a tie that the Furd win head-to-head), Oregon beating Oregon State (taking the Beavers out of the tiebreaker), USC recovering enough to take out Arizona.

However, the pieces only completely fall into place if they beat the Bears. Otherwise, they're out.

(Ironically, beating Notre Dame means nothing in this race, except probably the end of the road for Charlie Weis.) 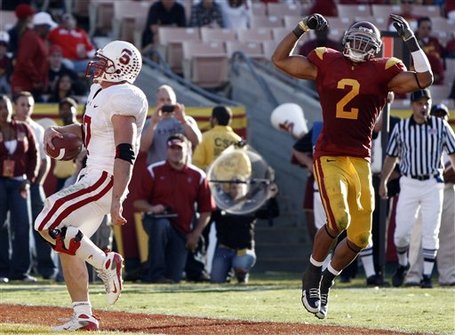 Oh well, what the hell--some poor guy had to grab this last scenario, six way tiebreaker nonsense for the Trojans to grab the Rose Bowl, might as well set the odds in stone.

USC should officially be eliminated the moment the Rodgers brothers set up a touchdown factory in the end zone of Martin Stadium. But if this shit actually ends up happening, no one but the Trojans deserves to win the Pac-10 for the next decade. It would be a monumental gagjob by every team in contention.

Actually, the most fun part of this was trying to guess what the lines were. How far would USC drop after getting totalled at home? On one hand, they're probably not going to be that great the rest of the season. On the other, they play UCLA (offensively inert against good teams) and Arizona (good shot they're playing for nothing), so I decided to be conventional for now. I'm still not sure how much last week's loss downgrades them in Vegas's eyes--the Oregon loss didn't seem to do much, which is why I'm holding out on this.

(*) Note: I know it isn't totally 100%; there's a 0.20 percent chance floating around there for various tiebreaker scenarios that I really didn't want to explore (I'm guessing some of them involve Washington State beating Oregon State or some complicated four-way/five-way ties that are really remote). rags decided to break down the most prominent scenarios, feel free to calculate whether most of the 0.20 is found here.

Epilogue: Will the Pac-10 get two BCS bids?

ragnarok: I took a look at the BCS situation, just to see how likely it was for the Pac-10 to get two teams into the BCS. Problem is, we keep beating each other, so I'm not sure if any team is even going to be eligible for at-large selection. However, the list of available at-large selections is pretty poor. At this point, it comes down like this:

That's four open slots. The winner of Cincinnati vs. Pittsburgh will get an automatic bid, and at this point, TCU would have to have a massive FAIL to miss out on an auto bid as well. That's two open slots left. After the Sugar Bowl takes the SEC title game loser, the Fiesta Bowl gets the next two selections, so they get to set up whatever game they like. However, I think they've got pretty slim pickings at this point.

I tend to think the Fiesta will take TCU, but if so, they almost certainly won't take Boise State as well -- a mid-major matchup like that would ruin their TV rating. They need at least one big name team to attract eyeballs. Okie State might be an attractive choice to replace Texas, but the Cowboys are on the fringes of the BCS as it is, and if they lose at Oklahoma in the season finale, they'll probably get knocked back far enough to be out of the BCS Top 14. Nebraska has a name, but unless they can win the Big XII outright, I can't see them in the BCS. Basically, unless Texas loses the Big XII title game, I have a hard time seeing a Big XII team in the Fiesta Bowl.

The Cincy/Pitt loser has a pretty good shot at an at-large bid, assuming Pitt doesn't lose to West Virginia next week (no small thing), and assuming anyone wants these small-market teams. Iowa is a candidate depending on how far they fall after losing to Ohio State. An upset in the ACC title game might leave Georgia Tech as an attractive at-large candidate for the Sugar Bowl, but probably not the Fiesta. Frankly, if the Fiesta wants some interest, they might do well to take a team like the Arizona/Oregon loser, or even USC if they can.

Me: Pretty sure the Pac-10 is out because the BCS is never about fairness. I'm guessing it'll go something like this:

Sugar
Florida/Alabama loser
Boise, Cincy/Pitt loser or Okie State if they win out, maybe even Georgia Tech if they lose the ACC championship game