Although the final score was an 8 point differential (24-16) at Saturday's Cal-Arizona game, it was really more like a 2 point game.  Cal tacked on an extra TD on an exciting Shane Vereen scamper at the tail end of the game.  Ironically, that gave Arizona slight hope that they could come back into the game, but that is a different post.

When you have what amounts to a 2 point differential, almost every play seems like it could have changed the balance of the game.  Certainly, there were many plays where the game seemed to hang in the balance.  But, in my mind, there was one play that completely and totally changed the complexion of the game.  One play where the entirety of the momentum shifted from Arizona to Cal.  One play that, in my mind, almost decided this game: The Double Pass penalty against Arizona QB Nick Foles on 3rd and short at the tail end of the 4th quarter.

This one stands out to me as being the key game-changing moment.  After the fold, follow me through the sequence of events that was the Double Pass.

To see this play in its fullest picture, we need to start before that Arizona drive.  Well before.  From the ESPN Play by Play.

After a drive starting on their own 20 (touchback from Riley throwing a pick in the end zone), Arizona, aided by 2 Cal PI calls on 3rd and long situations, scores a back breaking TD:

This put Arizona up 16-15.  Thankfully, they missed their 2 point conversion as we had before.  That means a field goal puts Cal ahead instead of tying it.  Still, plenty of time left.  Just gotta put the ball into the hands of our play makers and get a time-killing, long drive.  Which is kinda exactly what we did:

At the time, I was complaining about over ruse of the WildBear.  Especially since we literally ran the exact same play every time.  Isi Sofele comes running across the field, doesn't take the ball, Vereen fakes a few ways, then runs up the middle for minimal gain.  Considering we did manage to:

b)take gobbles of time off the clock

I guess it couldn't have been that bad.  Then again, perhaps with a few more passes from Riley, we might have scored a TD.  But the coaches seemed incredibly hesitant to call Riley's number on this drive.  Especially as we got closer to the goal line.  He throws 2 passes, completing both for 30 total yards.  Not bad.  The Tucker pass was REALLY impressive.  He threaded the needle perfectly.  Tucker took a huge hit, but managed to hold on.

Perhaps after Riley threw 2 goal line picks, the coaches wanted to avoid a 3rd.  Playing it really, really, really, really safe.  It worked, so hard to complain.  Nonetheless, it is just surprising that they wouldn't call his number once after getting inside the Arizona 33!

Then, this drive starts:

Ok, firstly, Delashaun??  We can add that to our Sean/Shaun/Shawn library of names.  Marshawn.  DeSean.  Knowshon.  LaShuan.  And now Delashaun.  Thank you Dean family!

Secondly, this was not exactly the stout defensive stop we were looking for.  They never even made it to 3rd down.  Cal fans were starting to get nervous.  Arizona with that impressive Air-Raid offense.  We had held it down for most of the game, but man just when it counted they were gonna hit the go-ahead FG with just a handful of seconds on the clock.  This was gonna be a classic Cal stomach punch loss.  Ugh.

Alex Zendejas is not a great kicker, but he's still pretty good.  Of course, at the time, I had no idea what was going on.  Being the Cal fan, I assumed they had the greatest kicker on the other side.  We were freaking out, thinking that  we had to stop them then, because it was right out of the range.  Considering Forza Italia hit a 47 yarder earlier in the game, anything was possible!  Zendejas previous stats in the 40s are minimal, just 0-1.  His numbers in the 30s look good 5-6  So, if they get a few more yards, hit the kick, we're screwed.

BASICALLY, IT'S THE BIGGEST 3RD DOWN OF THE GAME! GOTTA GET UP, FANS!

And we did.  The place was going impressively crazy.  Of course, then this happened:

3rd and 3 at CAL 25 Nick Foles pass complete to Nick Foles for a loss of 9 yards to the Cal 39, ARIZONA penalty 5 yard Illegal Forward Pass accepted.

Thanks to CalGBear's heady goodness, here is a YouTube video of it.  It is of fairly crappy quality, but is viewable sort of:

Ok, let me break this down for those who didn't see it live and are a bit confused.  Foles stands there in the pocket having all the time in the world (as he did for much of the game).  He throws the ball forward, but it bounces off of a player and back to him.  I couldn't tell who it hit in the blur of the game, but I was later informed from the SF Chronicle that Tyson Alualu blocked the pass:

Foles' pass was deflected by defensive lineman Tyson Alualu - and Foles caught the deflection, rolled right and threw another pass (which he completed).

Basically, Foles got Alualued!  As it states there, he rolled to his right and threw a pass.  The refs immediately threw every flag in their arsenal.  There were like 400 flags on the field.  I think at one point, the line judge covered himself in yellow paint and dove in the general direction of Foles.  In the stands, people started saying "wait, can you can throw a second pass?  no..no, you can't throw a second pass!!!  YOU CAN'T THROW A SECOND PASS!"

The only question was how many yards and did you lose the down.  The down was the key one there and as soon as the refs announced loss of down, my section erupted into a spasm of cheers.  But the best was yet to come.  Because they started to march the ball back.  And back.  And back.  At the time, we thought it was a 15 yard penalty, because a 3rd and 3 turned into a 4th and 17 and we can't do math.  No sir, we can't do math at all.  It's not like we went to the #1 public school in America or anything!

Reviewing the play by play, it appears that it is only a 5 yard penalty.  However, it is called from the spot of the foul.  Which, apparently, was 9 yards behind the line of scrimmage.  That's how 3 turns into 17.  3 plus 9 plus 4.  I actually can't crunch that in my head right now, so I am going to trust the refs on this one.

That puts them into a crazy 4th down situation.  At this point, the stands just went beyond crazy.  Everybody started jumping up and down on the benches and screaming.  I think NorCalNick nearly sprained his ankle, landing incorrectly.  He is getting a MRI and could be out for 4-6 posts.  And then this:

He almost hit this, but a Cal defender managed to step in front of the pass at the last moment.  Great defense there. 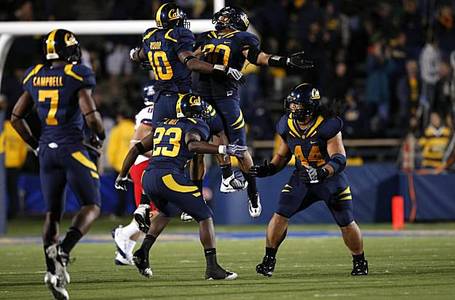 In the span of a few game seconds, but an interminably long real-time period, Arizona went from moving down the field quickly to score the game winning TD/FG to throwing an incomplete pass on a 4th down to give Cal the ball.  Of course, Cal immediately scored and missed the XP, which gave Arizona another chance to potentially tie the game.  Vereen woulda been better off running around in circles than scoring that TD!  ;)

Anyway, so, again, like my post about the Arizona State WildBear pass attempt, I have no overarching point here.  No TEDFORD IS GREAT! or FIRE GREGORY!  Just a closer look at a situation that coulda gone either way and how the momentum can shift so drastically in one play.  What are your thoughts on this Double Pass penalty play?  GO BEARS!