Mooch's return to Cal was exciting for us Old(ish) Blues back then.  Mooch had been the offensive coordinator during the latter part of the Bruce Snyder era, most notably the 1991 season when we went 10-2 and won the Citrus Bowl, our only New Year's Day bowl game since the 1959 Rose Bowl.  Unfortunately, when Snyder bolted for ASU after that season when Cal jerked him around on a contract (Bob Bockrath dumb move # 1), Cal passed over Mooch for the head coaching job (Bockrath dumb move # 2) and hired Keith Gilbertson instead (Bockrath dumb move # 3).  So when then-AD John Kasser hired Mooch to take over our program in 1996, there was a sense of optimism that he would bring the energy, enthusiasm, and success that was present at the end of the Snyder era. 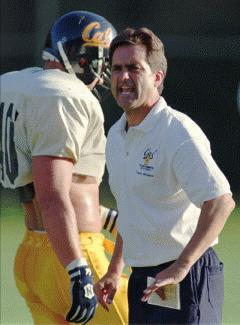 It started out well in 1996.  We began 5-0, including a win at the L.A. Coliseum against 15th ranked USC.  But then (inevitably?), the onset of collapse.  For our first loss, we lost in gut wrenching fashion at WSU, 21-18, losing a fumble at the Coug 1 yard line in the final minute.  Back then, the Curse of the Palouse was real.  The following week, we lost a home game to Ucla, 38-29, despite Pat Barnes passing for a then-Cal record 435 yards.  That game was yet more evidence of what many of us suspected to that point: the 1996 Cal Bears were all about offense; defense, uh, not so much.

(You think Cal fans slam Gregory these days?  If the blogosphere had been alive back then, DC Tom Holmoe would have gotten the same treatment one hundred fold.  Blown coverages in the secondary?  Check.  Tight end uncovered?  We got that.  Missed tackles?  You betcha.  Holmoe was so reviled by the Cal faithful that year that there was little chance he'd be considered for the HC job after Mariucci left...oh wait...FUCK!) 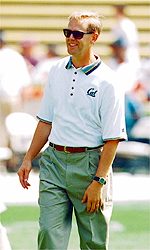 So after 7 games, we were 5-2 overall and 2-2 in the Pac-10, with a home game coming against the Arizona Wildcats.  We were in desperate need for a win.  For that matter, so was Arizona.  What transpired that day was epic.

Cal seemed poised to snap the losing streak.  Arizona brought its 1990s "Desert Swarm" defensive reputation to Berkeley that day, but Cal didn't seem to care.  The Bears rolled up 659 yards of total offense that day.  Cal ran the ball okay (Deltha O'Neal, a running back at that stage of his career, rushed for 95 yards on 15 carries), but our passing game was our bread and butter.  Bobby Shaw and Na'il Benjamin each went over 100 yards receiving that day, and Tony Gonzalez nearly hit a hundy.

And Pat Barnes was on fire.  Barnes threw 5 TD passes through 3 quarters, helping Cal build a 35-21 lead going in the 4th quarter.  Some in the crowd thought we had the game at that point.  "The 4th quarter is ours," n'est-ce-pas?  Besides, Arizona was primarily a running offense: they weren't gonna come back from 14 down in the 4th quarter.  No way. 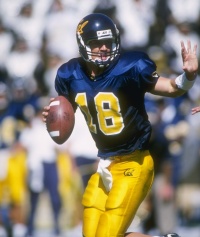 Uh, yeah way.  We made Keith Smith, Arizona's primarily running quarterback, look like Steve Young that day, especially in the 4th quarter.  Smith ran for over 109 yards and passed for 418 more.  Arizona scored twice in the 4th quarter on long TD drives, with the second TD tying the game with about 3 minutes left.  To overtime we went, tied at 35.

We traded TDs in the 1st OT, our TD coming on Barnes 6th TD pass of the game (this one to Dameane Douglas).    42-all.  Both teams missed FGs in the 2nd overtime, sending it to a 3rd OT.  Another exchange of TDs (another Barnes TD pass for us) took us to a 4th OT, tied at 49. 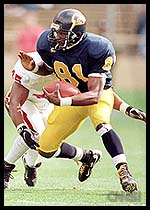 Dameane Douglas caught 6 passes for 83 yards and 2 TDs in this epic.

As it had done throughout the OT periods, the Cal student section "shifted" to the side of the field that the teams were playing on.  For the 1st and 3rd OTs, the south end zone was the battleground.  That meant we in section QQ were a little more crowded than usual.  Some fans were annoyed; I didn't mind.  For the 4th OT, however, we in QQ had a little more room - the 4th OT was played at the north end.

Cal had the ball first in the 4th OT and scored on yet another Barnes TD pass (this one to fullback Marc Vera, his second of the game).  56-49 Cal.  A defensive stop would win the game!

Arizona lined up for what we all assumed would be the tying extra point.  On to a 5th overtime we'd go.  I was bracing myself for the humanity that would crowd us if the action shifted to the south end zone.  But there would be no "9th quarter."  Arizona Coach Dick Tomey decided to end this thing, right then.  With a fake extra point!  Arizona's holder flipped the ball backwards to the kicker, who sprinted as only a kicker can toward the right corner of the end zone.  But Andre Rhodes, a Cal linebacker who also played on the field goal unit, sniffed out the fake and tackled the kicker well short of the goal line.  The crowd was stunned.   Did we just see what we thought we just saw?!?

I couldn't go another overtime.  The horror!  We needed to end it!

The Bears have won!  The Bears have won!   I tried to give out one last yell in victory.  Just about nothing came out.  My voice was spent.  The game ended just in time.  I had left it all out there and had nothing left to give for a 5th overtime anyway.  (It didn't stop me from reveling in victory, however.)

Later that night, I heard Pat Barnes being interviewed about his epic day on ESPN radio.  Barnes ended up breaking his week-old record for passing yards in a single game, going 35 of 46 for 503 yards and 8 TDs.  Cal football was 6-2 and relevant.

Alas, we wouldn't win another game that season.  It would be Mooch's final win as a Cal coach, as we closed the season with losses at Arizona State, at Oregon, in the Big Game, and in the Aloha Bowl vs. Navy.  The game would also help spawn a rule change in college football overtime: everyone goes for 2 after the 3rd overtime.

At that time, though, we didn't know all of that.  We just knew the 8th quarter was ours!

The 4OT epic vs. Arizona in 1996 is most memorable for