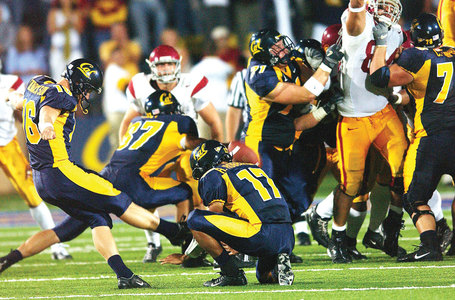 Even if he is not quite a household name for Cal fans, people still know the legend that is Cal kicker Tyler Fredrickson. If they haven't quite heard of his Insight Bowl heroics, they definitely know him as the kicker who booted Cal past USC in 2003. It was easily the biggest win of Tedford's career (to date) at Cal and Fredrickson was the center of all the action.

Thanks to the amazing connections of DBallisloose, Fredrickson has been kind enough to offer an interview to us here at the California Golden Blogs. He should start posting here, too, because, based on his answers, he is a energetic and delightfully irreverent writer just like the rest of us goons. Major thanks to DBallisloose and MAJOR thanks to Tyler Fredrickson. Not only for some great memories back in the day, but the great memory we are all about to share! GO BEARS!

1. What made you choose Cal over other available schools?

Fortunately for me (and for my parents), Cal was the only thing left me. Up until that point, all teams that had expressed any previous interest had dropped off which left me pretty stranded. In fact, the moment I committed to Cal I was swimming at a friend’s house during a senior pool party just hoping my parents would make the college decision for me. As I said, fortunately Cal was still offering a walk-on spot so we took it.

2. Is the team clique-y off the field? Do all the kickers hang out together?

The team itself – because of the hours spent and physical quality of the game – is cliquey by nature. Positions to a lesser extent. But most of the freshman and JC transfers room together so players tend to stay close. I joined the team so much later (a week before school) that I roomed with regular students. It ended up being a blessing in disguise as it allowed me to avoid an over-saturation of football stuff. Plus, I was able to keep the locker room funk from infiltrating my dorm. 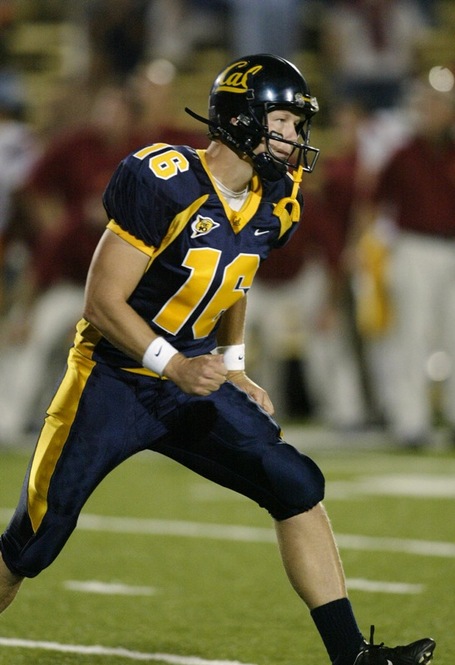 3. What was the best class you took at Cal and why?

"Hard Knocks". Only half-kidding. Classes were great – they helped influenced the career I’m in now – but the demands of football, the politics, the frustrations taught me so much more about life and who I want to be. If I had to choose, "Silent Film Cinema". Pretty boring but it was Eye-opening 101.

4. How much attention do players really pay to academics, are kickers better students than players at other positions?

Like any other student, academic interest varies from person to person but O-Lineman tend to be pretty smart. Some guys take it more seriously than others but since football is essentially a full-time job it takes intense time management to stay on top of the demands. It depends on your goals after school. A lot of guys want to play pro ball, others want a degree, and even more just go through the motions because it’s the best option at the time. I just did it for the chicks...and was terribly disappointed.

5. What did you like most about Cal outside of football?

A whip on blades, $500 bucks to water an alum’s lawn, ladies lining the block... the list of NCAA violations goes on and on. Ultimately, the relationships formed. It’s a pretty boring answer but probably the same thing that anyone else remembers college for. Minus the sheep. I told that sheep I would never let go...

About your kicking days

6. What is your favorite football memory from Cal? (I can’t imagine it would be anything other than USC 03, but might as well ask)

Actually, the fondest memory was the Insight Bowl kick. Over time, the SC one has proven to be more important but as we lined up against Va Tech I had already been the hero (SC) and the zero (UCLA) so there was more at stake. Plus it was the final game of my career so afterward I partied with the coaches and Cal fans at the hotel. Although the surprise kiss during the midfield mob versus SC has gotten some media attention, she tasted like beer and remains only a (bitter) memory. 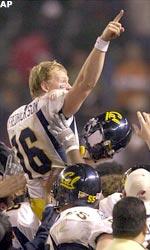 7. What goes through your mind, generally, when you were about to do a kick?

Hopefully nothing. It’s when you start thinking you get in trouble. At that point, if you can’t turn off your mind and simply operate on muscle memory you’re screwed. The doubt will 99.9% of the time get the best of you.

I grew up a soccer freak. And my dad was a linebacker at the U. of Pacific when they still had a team so all we watched was football. Periodically he would take me to the local high school and we would waste time around the uprights – but it was never serious. It wasn’t until the head coach at my high school approached me after soccer practice to hit a few balls one day. We did, he liked it, and next season (Sophomore year) the job was mine.

He comes by that mentality naturally. His father, Mark Fredrickson, was a defensive tackle at University of the Pacific from 1974-76. And that Pacific connection makes Saturday's Pac-10 opener against USC particularly special for Fredrickson.

Trojans coach Pete Carroll is an old family friend. Carroll, a defensive back at Pacific in '71 and '72, was beginning his career as a graduate assistant when the older Fredrickson was playing.)

10. Were you ever the last man between a kick returner and the end zone? What went through your head then?

11. What’s a day in the life of a kicker/punter in an NFL training camp like?

A lot of standing around the in heat, some kicking on your own, stretching, Gatorade, jokes, some more Gatorade followed by ten minutes of relentless, undying panic eclipsed only by suffocating pressure where you lose all feeling from the neck down while swallowing back your threatening breakfast without pissing your pants. After practice you look at the logo on your helmet and remember why it’s all worth it.

Because it’s bloody hard. Not only the wear and tear of hundreds of additional kicks throughout the year but the physical aspect of switching techniques constantly. They are completely different leg swings. Not to mention the mental aspect – like, how do you warm up for a 3rd and long from your opponents’ 40? I think it’s starting to make a comeback, especially in NFL where, due to decreased roster spots, these are the only free agents teams are signing out of college.

Never really bothered me much. In fact, it was often additional time to breathe a little and take a few extra swings to get in the groove. Although, when Frank Beamer iced me vs. Va Tech I gave him a decent stare. The game was going to end anyway, why delay the inevitable, Beamer?!

14. What’s the biggest difference between kicking in practice and kicking in a game – is it more mental or is there something about the environment (noise, pressure, etc) that makes it different? Why do you think the current kickers are having so many problems transitioning from practice to the game?

The mental aspect, definitely. The opportunity to put points on the board is so rare in football these days that any chance to do so must be capitalized upon. Therefore, there’s always added pressure come gameday to execute. I haven’t spent any time with the current starting kicker to know his head, but I assume by the way he’s been hitting the ball that he’s overthinking his operations. Look, the kid’s young and inexperienced and obviously the coaches believe he’s the best for the job and as he matures things will improve. I know that’s not the answer Cal fans are looking for though.

15. Given our recent woes in the kicking game, how much of a temptation has it been for you to re-register as a student at Cal under a pseudonym, suit up, and get out on the field and nail some game-winning kicks? I suggest wearing one of those fake mustaches, too. You know, in case the NCAA gets suspicious.
Don’t tell my wife but I would never turn down an opportunity to get some lovin on the fifty again.

I’m no longer on the team and I certainly don’t pretend to know what’s going on in that locker room there. But the team needs leaders to step forward and project a certain confidence. Without those huddle leaders providing the heart and soul it’s baaaaad news. And expectations should never change – one should always demand the very best of themselves and of those around. Anything less is unfair and a waste of time. And more than anything, I hate people wasting my time. 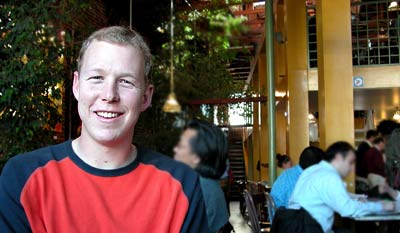 17. Do you talk to any current Cal players, specifically the kickers?

Of course! We helped recruit Seawright and Georgio and I’ve spent the past few off-seasons working with Anger, who is one of the best. Good guys, all around.

18. Do you still keep in touch with the former Cal players from your era?

A lot of them. They were my family for a good 5 years and those relationships just don’t disappear overnight. Facebook has helped too.

19. So we heard some female gave you a big french kiss after the USC game. Please tell us more details. What other odd/nice/bad things have people done to you because you were the Cal kicker?

What other details do you want?! There was tongue, there was beer breath (not mine), and outside of my dreams I never saw her again. If I learned one thing from the SC game it’s that when the fans rush the field TAKE. YOUR. HELMET. OFF. You think it’s protection to leave it on but you’re a moron. It’s the only thing anyone notices poking out of the sea of heads and it’s the one thing everyone decides to slap with their open palm. Take it off, protect yourself. Some might call it vanity but after the Insight Bowl the first thing after the fist pump was "Ditch helmet!" After the SC game one guy asked for my shoe ("No, dude, I got practice on Monday...") but the weirdest was one student asking for my mouthpiece ("No, dude. Just...no.")

Nobody really gets under my skin that much but maybe my old boss’ assistant. She can burn. Or I suppose Ahmadinejad. Kanye could use a swift Timberland to the grill. Or Adam Duritz.

(TwistNHook Note: I am informed and believe and thereon allege that Fredrickson and Adam Duritz are actually very good friends and Tyler meant this in a joking fashion. Some below are taking it quite seriously and it should be stressed that it was just a joke.)

21. If you saw an idiot wearing a double-breasted suit in the stands at a Cal game, how hard would you honk him?

Not 100% sure on what "honking" refers to. How does one honk? More importantly, WHAT does one honk? I suppose it sucks to be him because it can get frapping hot on the student side during those glorious Cal Football Saturdays so a point and WTF look would probably suffice. Unless it was Duritz. Then I would kick him in the face.

22. What has better prepared you to meet your career goals, your Cal education, or your experience as a professional athlete?

Pro athlete. Nothing can compare, nothing comes close.