In the past few months I had the unexpected opportunity to work for the television broadcast of a football game. I'm sharing what I can because I found the experience very eye-opening - I learned tons about a process that for 15 years of fandom I have taken for granted. Note: In the interest of professionalism I feel uncomfortable identifying exactly which game (college or pro) since I have no desire to unintentionally impugn the reputation of those I observed around me.

Through personal connections I was approached with the opportunity to do some statistical work for the TV broadcast of the visiting team. As far as I can tell it is not unusual for a visiting production team to find help locally through a temp agency or with people recommended by employees of the home team. Because of the short notice I was given (less than a week) I was not entirely sure what role I would be playing on game day, although it was indicated that I would be working in the press box. 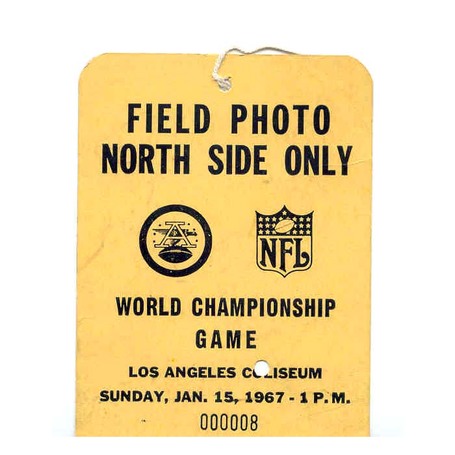 When I arrived at the stadium I made my way to the TV production trailer to get my press pass and check in with my employers. I met a couple guys in the trailer and introduced myself as the ‘stats guy’ and they began to describe what kind of stuff they would want from me: Down and distance, drive stats, 3rd down conversion rates, red zone success and any other stat that would interest the TV audience. They then gave me the name of the two people I would report to in the press box.

This was described to me while inside the production trailer, a tightly compacted collection of overwhelming amounts of technology. Two close rows of control panels faced a wall of monitors and every wall was full of plugs, inserts, wires, buttons, dials and everything else required to bring football from the stadium to your TV. Sadly, I’m not technologically inclined and couldn’t begin to tell you what any of the stuff is called and what exact purpose it all serves, but suffice to say it was very impressive. 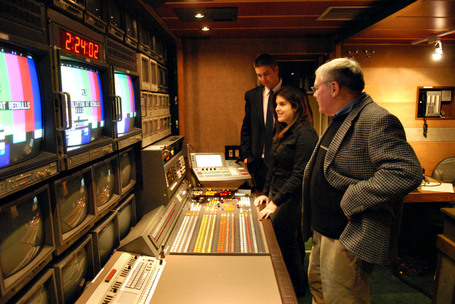 With a better idea of my assignment I headed into the stadium and made my way upstairs, not sure exactly how I would find the people I needed to find. There was nobody obvious in the press box so I went to the row of announcer’s booths figuring that I was looking for a producer or engineer. I stuck my head inside the booth marked ‘Road Team TV/Radio’ and asked for the two names I was given…and a man in a suit shook my hand and introduced himself. I was given the names of the play-by-play and color announcers!

The play-by-play announcer then described what he wanted from me, and that was help spotting certain stats as the game went by. Mostly, this meant yardage on a big play. With all of the minutia a play-by-play announcer has to cover (down, distance, identifying players, formations, tacklers, etc.) there isn’t time for things like yardage of a long play, a punt or punt return, or drive stats. I asked him where he wanted me and he pointed to the space next to him at the table…

…Wait…I’m going to be sitting in the announcer’s booth next to the play-by-play and color guys?!? It was at this point that I thought "maybe I’m in over my head." Although I have experience working on stats crews in the past I had never acted as a spotter for a play-by play man in the past. I was told to chill out until about 30 minutes until game time.

As I waited and tried to prepare as much as possible, I started thinking back to stories I had read when Joe Starkey retired as play-by-play man for the 49ers. He talked about the hours of preparation every week he undertook with his stats spotter – his son. If Joe Starkey prepares with his spotter for hours and still does poorly enough to have reasonable people advocate his firing on the internet, how am I going to fare? I’m gonna bomb!!! I began imagining nightmare scenarios in which I accidentally feed the announcer an absurd stat or unplug a headset during the broadcast and get kicked out of the booth at halftime. 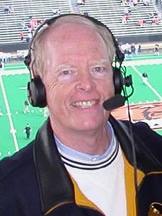 Nevertheless about 45 minutes before the game I trudged back to the booth, ready to throw myself into the fire. I sat down and had my headset explained to me. It had two channels; one that allowed me to talk to the engineers in the TV trailer and one that played the game audio. At this point I began to panic even further because I realized that the headset would cover my left ear, which happens to be the only ear I can hear out of. It turned out to be a non-issue because my communication with the play-by-play man was entirely non-verbal since he quite obviously wouldn’t be able to ask me questions out loud while on-air.

While the announcers were busy taping their pregame intro, another man came up to the booth and announced that he was told to come up to work stats. Everyone was quite confused as to why two people arrived to do the same job while I wondered if this was my chance to get out of job. As it turned out the new guy had as much experience as I did (none) and they decided to stick with the guy who had already been told what to do. I talked to the guy later and he just ended up watching the game from the press box because nobody gave him anything to do. Lucky.

I was initially concerned that any talking I did to the trailer would be picked up by the announcer headsets and sent out to TV land, but apparently that was never an issue. I was told by the booth to announce the down and distance for every play so that the graphic would be put onscreen. My first official duty was communicating to the TV trailer that the home team had won the toss and elected to receive.

The game itself was a bit of a blur as a desperately tried to keep up with all of my various duties. Before the game began I had a fantasy that I would be able to keep track of pretty much anything – individual stats of QBs, RBs and WRs, 3rd down conversions, etc. As it turns out I had barely enough time to announce down and distance, keep track of drive stats, and stay one step ahead of the announcers. The first quarter ended up being something of a fiasco as I tired to keep up with too much. I forgot to keep track of how many plays had been run on the first drive and wasn’t able to supply that info for the TV crew. Also in the first drive the home team converted a critical long 3rd down, but I was distracted and missed the starting yard line for the play, so when the play-by-play man turned to me for the gain on the play I didn’t have it for him.

The most surprisingly difficult part was remembering to count the number of plays in each drive. If I didn’t write down a number for each play I would lose track easily, and that didn’t take into account accidentally counting a play negated by a penalty or confusion caused by a timeout. It was also critical that I write down the starting yardline of each play so that I could quickly do the math to come up with the gain on the play (piece of advice: don’t count on your brain to do math in your head when you’re stressed and have a severe time limit). I was frequently off by a yard on distances gained or yards to a 1st down, although in my defense this was more often that not because I needed to report a figure before the refs had placed the ball for an official spot – a frequent complaint amongst football stats keepers.

As the game wore on I got better at my duties, at least in terms of helping the play-by-play man. Whenever there was a long gain I tried to have the number written down on his scratch paper before he turned to me, and he gave me a couple of slaps to the back as I gradually got the hang of it. My only major snafu the rest of the game was failing to note the yard line a touchdown drive began on, which led to me running headlong downstairs to get the drive distance from the official stats crew so that I could report it for the TV graphic. 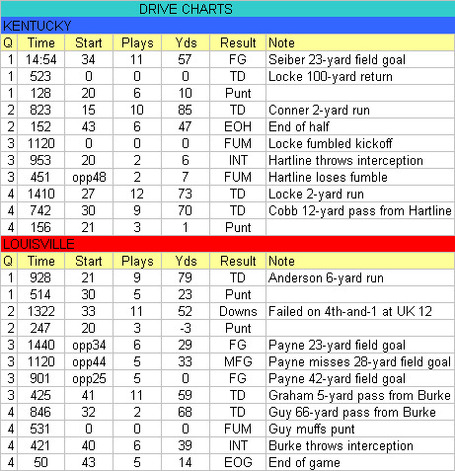 Turns out that people really care about the above information

I had just enough time at halftime to visit the urinal and get a new water bottle, which turned out to be a big mistake because it resulted in my needing to pee for the entirety of the 4th quarter. Near the end one team had the chance to send the game to overtime, but mercifully failed and I was able to go to the bathroom without extra football.

With the game over I shook hands with the play-by-play man who graciously thanked me. I told him, "as long as I was more useful than if nobody was sitting to your right then I’m OK with everything," and he assured me that I helped him out a few times. There were a number of questions that in retrospect I would have liked to ask him about broadcasting, but it seemed inappropriate with him still on the job after a long 3 hours of work. With a great sigh of relief I headed downstairs to figure out how to get paid.

As it was described to me later, my job may have been more difficult because I was serving two functions. Typically a different guy will sit with the official stats crew and communicate info to the TV trailer while a different guy is the stat spotter for the announcer booth. I appeared to be filling both roles. I’m still not sure if this was by design or accident, but evidently there was a guy sitting with the official stats crew but he never said anything or asked any questions.

I left with a newfound respect and understanding of what it takes to do play-by-play for a football game, and a newfound respect for the people that get the down and distance measures wrong on the TV display. For as long as I remember I’d complain about on screen errors (2nd and 8 when it was really 2nd and 7, 2nd and 5 when it was really 3rd and 5, etc.) without realizing how it might work. Now that I’ve been the guy screwing up that aspect of the production I’ll probably never complain about it again. And I owe a great deal of thanks to the announcers for their patience and friendliness. If I were under the stress of their job I doubt I would have had a smile on my face.

As it turns out, way harder to do than you'd think

I’ve been asked a few times if I would do it again. I would say yes - if I were given the job on at least a semi-permanent basis and could prepare more with the crew. It was difficult to go in fresh with no training or experience with the people I was working with. But being a broadcaster in some way has always been a pipe dream of mine, and anything that would allow me more experience in that environment would be a wonderful opportunity.