Share All sharing options for: Reveling in Victory - Finally! Cal wins in LA!

I started writing for the Golden Blogs two years ago, following another heartbreaking loss to the bruins in the rose bowl.  That made three horrible, painful, soul crushing road losses against the bruins in a row.  I vowed never to return to LA, unless Cal was playing in the Rose Bowl on January 1.

When the pain from the 07 loss subsided (so, about 3 months ago), I reconsidered; I would go if Cal was very good and ucla very bad.  After watching Cal score less than my amateur hockey team over the last 4 weeks, I decided to play it safe and stay home.  We should probably give some credit to the team and the coaches, but how about some for me?  I went in '03, '05, and '07, Cal loses in miserable fashion.  I stay home, Cal wins.  You're welcome.

I ended up watching, and subsequently reveling, alone on my couch, because RemorsefulBruinBabe hid the car keys, left the house, and turned her phone off for 5 hours.  It was a devious plan, bruin, but while you may have stopped me, you and Brian Price can only do so much.

You know who deserves a lot of credit?  All of the Cal fans who made the trip down to LA after watching us get demolished the last two games.  I am very much enjoying the reveling from my couch, reading the comments, watching the highlights, but it can't be anywhere as sweet as reveling in LA tonight.  Watching all those fair weather fans file out of their stadium must have been incredible. (And I know it happened - when a holding penalty was called against the bruins with 5 minutes left, the crowd cheered.  No boos, because apparently their weren't any ucla fans left.  Way to represent, Cal fans!  We stand and take it until the bitter end against SC, ucla fans can't even stay to the end of a reasonably close game.)  Getting to chant our own cheers and listen to our fight songs in jubilation, instead of hearing bastardized versions of them played after Schneider misses a kick/Maurice Drew returns a punt/Longshore throws a pick 6 must be AWESOME.  So big, big props for CaliforniaBone, Ragnarok, my friend Chris from college, and everyone else who stared both recent (72-6) and distant ('03,'05,'07) history in the face and went down to Pasadena anyways.  Post your stories from the game and especially the post-game in the comments so I can live vicariously through you. 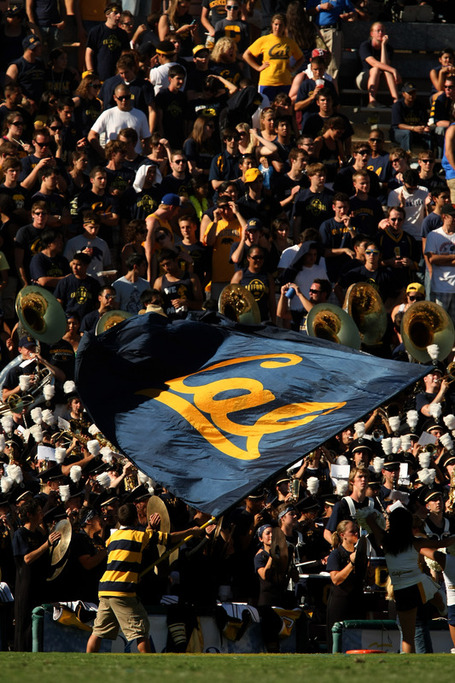 You guys are heroes!

I am still in a bit of disbelief that we actually, really, finally won in LA.  I know we were favored, but we've been favored down there before.  Even with a 15 point first half lead, it seemed familiar, another we're playing well on offense but not putting them away our kick coverage sucks oh no here comes the heartbreaking loss! game.  I kept waiting for the inevitable heartbreaking play to blow the game (the way it was going, pretty obvious that it was going to be a kickoff return), but somehow, for some reason, it never came.  CAL was the team with the play to seal the deal, a pick 6 to put us up by 19 with 6 minutes left.

And who was the guy to put it away?  None other than Mychal Kendricks, who, according to Okanes, played only 15 snaps.  Kendricks, of course, had this to say earlier in the week:

We can’t lose again. I don’t think we are, either. Actually, I know we’re not...We’re going to win this week.

I didn't put too much stock into this, because the last time I heard a Cal player giving a guarantee, it was Robert Jordan in 2007 against ucla and then someone else against ASU the following week.  Those didn't exactly pan out.  If you're going to use big boy words, you had better be able to back them up.  Well done, sir. 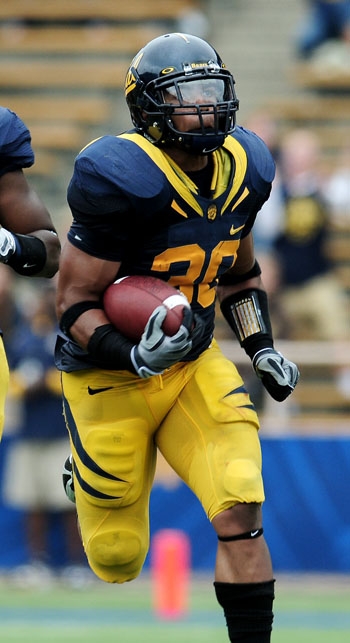 Not getting caught from behind today

That play was clearly the defensive highlight of the day, and it compensated for a pretty mediocre day from the defense.  Ucla is not a good offensive team, but Cal made them look like one for much of the game.  Ucla held the ball for sustained drives, protected their QB with a patchwork offensive line, and were a couple of lapses away from a very tight game.  Kick coverage...yikes.  But that's for another day.  Who knows if it will be another 8 years until Cal wins in LA again?  Our defense and special teams are definitely cause for concern (especially if Syd isn't back very soon), but let's ignore it for now and talk about happier things: offense!

Cal didn't have the most consistent offensive performance: most of our touchdowns (actually, now that I think about it, all of them) came on big plays, not from particularly long drives.  There might be some cause for concern here too, but I think the lack of offensive consistency was due to one large, strong, fast, and very nimble man: Brian Price.  He absolutely dominated our offensive line and was in our backfield on most running plays.  That is not an exaggeration: Best gained only NINE yards on seventeen carries outside of his spectacular 93 yard touchdown.  Price's penetration was the ucla defense - when he briefly left the game in the third quarter, Cal opened up massive holes on the left side of the line and moved the ball with ease.

The guy is a monster.  Incidentally, he was also a "minimum qualifier" out of high school (like Marshawn, I believe), although we know that's impossible because ucla has higher academic standards than we do.  Whoops.

But man, aside from losing yardage on most of our running plays...what a bonanza!  If you somehow didn't see the game, click here right now to watch Best's touchdown run.  It was incredible, even by his standards.  Best did his sideways shuffle (while going at top speed, I have no idea how he does this) to make the last guy miss, which usually makes him lose his balance and stumble.  Not this time.  What a run.  I'm going to watch it again. 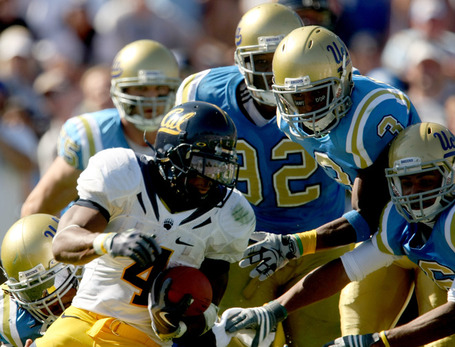 How about Marvin Jones?  Pretty nice catches from #1, especially the second one against great coverage by Verner.  He has, as the experts say, great ball skills when the ball is in the air.  Catching the second td to put Cal up by 18 (after the ucla field goal, 15) going into half was absolutely huge. 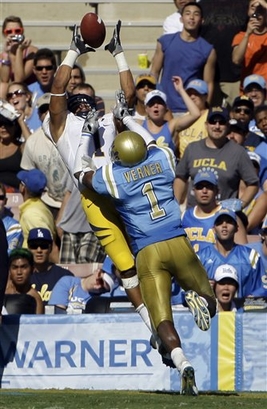 Riley had a very strong day as well, putting numerous deep balls (like the one pictured above) right on the money, hitting some short passes (tight one to Miller, slant to Boateng come to mind), and not turning the ball over.  He also was great in the pocket, moving to avoid the rush when necessary and taking off to pick up some critical first downs on the ground. 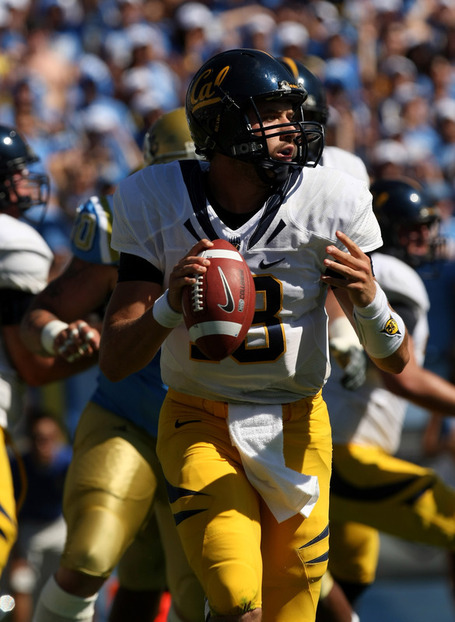 you were good today, despite the mustache.

Finally, Shane Vereen.  He was better than Best for much of the day.  While he didn't rip off a huge run (his touchdown was only 42 yards), he moved the ball more consistently. 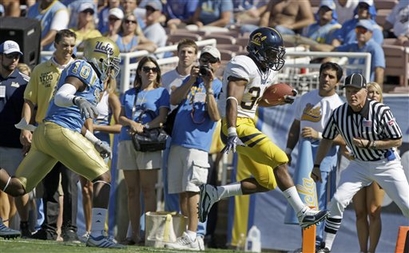 Revel, people.  Revel big time.  We may be only 1-2 in conference and completely out of the Rose Bowl picture, but at least, FINALLY!, we won in LA.  Think of all the evil down there: Neuheisel, Luke Walton, smog, everything usc, Alfred Aboya's moving screens, probably Dave Libby, OJ Simpson, OJ Simpson's former attorney who tried to break my camera at the usc game two weeks ago, 100 degree weather in October, Tyra Banks, Pete Carroll when he loses, fill in the blank here.  The only good thing I can think of is Rob Scuderi, now with the LA Kings.  We miss you Rob!

Anyways, all that evil: today, for the first time under Tedford, Cal has marched rode down there on buses and defeated it.  It is vanquished, if only for today.  And if you think you are being to joyous, too jubilant, just remember every other game in LA this decade.  Tonight, we celebrate.