How Will Cal Perform in the Final Seven Games of 2009?

Share All sharing options for: How Will Cal Perform in the Final Seven Games of 2009? 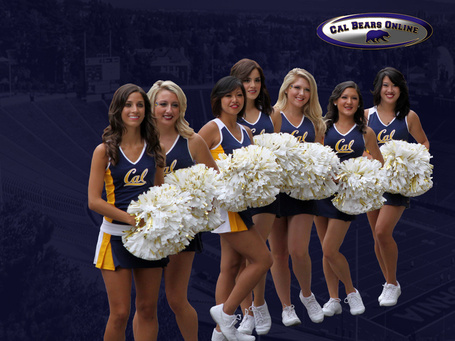 via calbearsonline.com (Get the desktop wallpaper here!)

The number seven is supposed to be a lucky number (it actually is defined as a lucky prime). There are Seven Lucky Gods of good fortune in Japanese mythology, seven heavens in Islam, seven days of creation, and Seven wonders of the World. Add in The Seven Samurai, 007, seven hills of Rome, Game 7, The Seven Habits of Highly Effective People, etc. etc.

It all adds up--seven is usually a good thing. Well, except for maybe 7th Heaven.

Seven has popped up here and there during Jeff Tedford's time at Cal, but it hasn't always been of the fortunate type. The Bears won seven games in Tedford's first season. They've had winning seasons in his seven seasons at Cal. He's produced seven straight 1000 yard rushers. Two seasons of Cal going 7-0 at home.

On the flip side though, seven has also been a curse for us. The Bears needed and couldn't get the seven points to win games in LA in 2004 and Tucson in 2006, wins that would probably have clinched BCS berths and put the program over the top. The Bears have lost seven of eight Pac-10 games on the road (that one win coming against the worst team of the decade). And it was those final, dreadful seven games of 2007 that left Cal fans reeling and Tedford scratching his head.

Now, again like in 2007, we have seven games left in the regular season. As we hesitantly get back to the football grind, we all wonder, how will the Bears perform after our last two defeats? Who do you think are the toughest opponents we'll face? Other than Wazzu, who do you think we'll pounce on? Will seven grant us luck this time or hit us with another curse?

After the jump, a quick hit look at our remaining seven opponents, and the strengths and weaknesses of each. If you want, use that info to help guide your thoughts in the comments.

Keep in mind my forecasts are just assessing my own ridiculous probabilities I just came up with on the fly, I'm not picking who's winning. 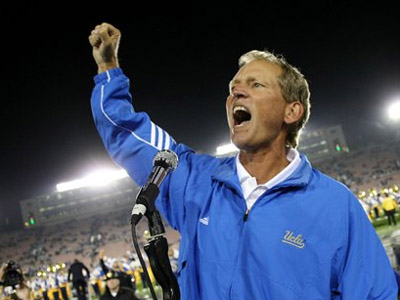 Strengths: Perhaps the second best secondary in the Pac-10 besides USC, giving up only 162 yards per game through the air (13th in the nation), as well as allowing only 5.7 yards per attempt and a 52% completion rate (both top 20 national rankings). Not too shabby in rushing defense (32nd in rushing YPA) and scoring defense (25th in PPG), and they're 21st in 3rd down conversion defense. I'll go out on a limb and say this team's strength is defense. 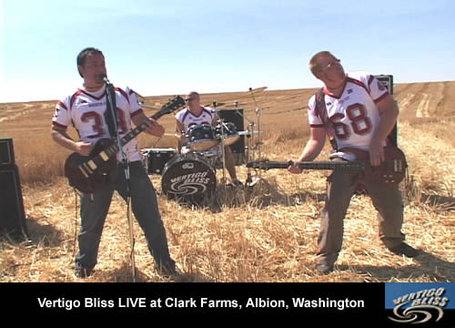 Strengths: They have eleven players who can start on offense and defense.

Weaknesses: It's the same answer to the number of digits of pi.

Strengths: Could be your sleeper Pac-10 defense of the season. Vontaze Burfict could be the most talented linebacker in the conference...as a freshman.

The Sun Devils have only allowed 50 rushing yards per game, second to only Texas. Jacquizz Rodgers barely broke 80 yards on them. They've allowed 11.8 first downs, first in the country. They've forced 15 sacks, third in the conference behind Oregon and USC, and 44 tackles for loss (9th in the country). They've also gotten 11 interceptions, 3rd in the country. In other words, they look just like UCLA's defense--testy and formdiable.

The Sun Devil rushing game has also improved from horrendous to average, which helps them keep the ball moving. Running and defense; two key ingredients to a usually solid Pac-10 team. Add in Halloween in Tempe and I'm fairly spooked about this one. If their defense just needs to force mistakes and give their offense a short field to work with, look out.

Weaknesses: Still not sure how much the stats mean, since they've played Idaho State, Louisiana Monroe and Wazzu. We'll probably get a better idea after they play Locker and Luck these next two weeks. Still, going into Georgia and nearly knocking off the 3-3 "I just got curbstomped by Lane Kiffin" Bulldogs has to count for something, right? Um, right?

Meanwhile, while the running game has gone up, their passing game has regressed even further. Their quarterback play from Danny Sullivan is in the lower tier of the Pac-10, placed in the bottom 15 of passer rating, the bottom 20 of passing yards per attempt, and the bottom 25 of completion percentage nationwide. We might be seeing Brock Osweiler in this game if Sullivan's struggles persist.

It'll be up to Cal's defense to make sure these trends continue, no matter who's in the game.. 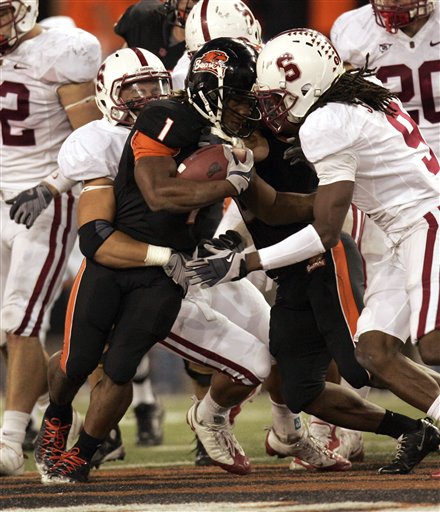 via a.espncdn.com (photo by Don Ryan)

Strengths: Surprisingly, the Beavers pass attack has been one of the best in the Pac-10, being first in yards per game and first in completion percentage, with Sean Canfield completing at a two-thirds clip. When they get to the red zone, they're 23 for 24 in scores, and tops in the conference with 17 red zone scores. Their rushing defense is in the top 20 of the country, holding Gerhart to absolutely nothing. Oh yeah, and we haven't beaten them at home since Tedford got here. That's always a nice psychological edge.

Weaknesses: Canfield's success has come despite enormous struggles in pass protection, with the Beavers O-line already having given up 19 sacks. They depend heavily on the Rodgers brothers, who have almost three-fourths of Oregon State's all-purpose yardage; if either of them get injured, their offense becomes something that amounts to less than one-dimensional, if not quite zero-dimensional (how many times can they run an inside zone with Quizz or a fly sweep with James?).

Their pass defense, usually stout, is a trouble spot, currently fourth to last in the conference in passing yards per game. And when they let opponents into the red zone, they usually give up touchdowns (fourth to last in the country). Oregon State technically is a weaker squad than their Rose Bowl-contending team from last season. Naturally, this game terrifies the hell out of me. 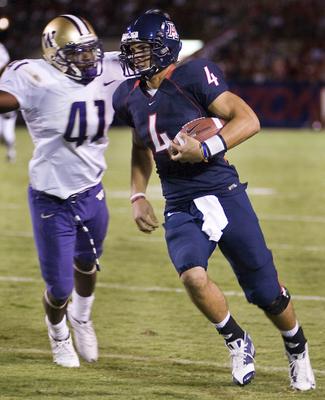 Strengths: Their offense hasn't missed a beat with Willie Tuitama now taking orders in Tucson; even though they don't run the ball much, their rushing YPC is 9th in the country and they pile up 194 YPG. Their passing game has become amazingly efficient under Nick Foles; they've completed 66% of their passes (19th in the country), but Foles is even better than that, completing nearly 72% of his throws. Their defense isn't too bad either; they give up a lot of completions, but their pass defense is 31st in yards per game and run defense is 20th. The Wildcats have put up great fights on the road against Oregon State and Washington, had a great shot at going 2-0, and could very well be the third or fourth best team in the conference.

I expect this to be a very difficult game, especially if Sonny Dykes is able to gameplan the Airraid offense well enough to pick apart the zone coverage Cal offers. It'll be up to the Golden Bear offense to match it up, but the Wildcat defense definitely looks solid itself.

Weaknesses: As shown in the UDub game, when Arizona gets into the red zone they can struggle to punch it in. They're 81st in the country in scoring touchdowns in the red zone.

Despite the defense refusing to give up the tons of yards, they're 92nd in the country in 3rd down defense. Even worse, they're next to last in allowing touchdowns in the red zone, giving up six 84% of the time. The good news for them is that they don't allow defenses into the red zone that much. 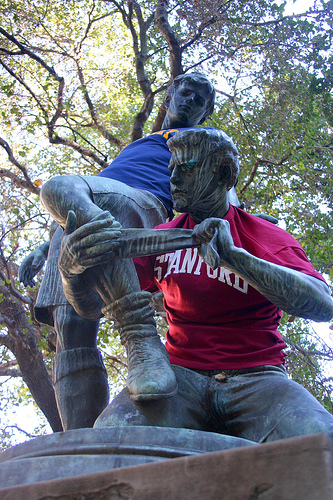 Strengths: They're the best power running team in the conference behind the White Stallion. Toby Gerhart has the Cardinal paced at 8th in YPA and 13th in rushing yards per game. Their offensive line is pretty good in pass and running situations having given up only 4 sacks this year (T-7th in the nation), and 21 tackles for loss allowed (T-13th). Also, they have the deadliest kickoff returner in the country in Chris Owusu. I'd be very happy if Alamar opts to kick the ball out of bounds after every Cal score. Cal's run D (which has been pretty good) should face its stiffest test of the season here.

Weaknesses: I think I overrated Andrew Luck a tad. Although his passer rating's around 140 and averaging a solid 8.5 YPA, he throws the least out of anyone in the conference, and his completion percentage is still under 57 percent. We saw what happened when the Furd could not run the ball. Also, the jury is out on their defense, especially after getting chewed up by Oregon State in that first half; they will definitely be put to the test against a fierce Arizona offense this week. Jahvid Best ran all over them last season; can he do it at the Farm? 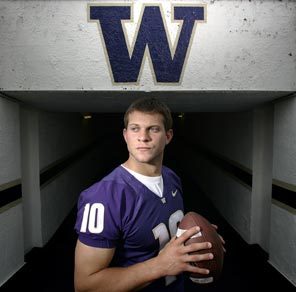 Strengths: Jake Locker is finally becoming a great passer. Well, sort of--he's still not very accurate, hovering around 57%. However, he's making the throws that count, and it's reflected on one crucial stat--3rd down conversions, where the Huskies are 5th in the country. If you remember that USC game, Locker made some critical 1st downs on 3rd and long situations, and he did the same against Arizona. In 3rd down situations, the passing offense has picked up 30 first downs, 3rd in the country. Considering how porous Cal's zones have been this season, this is definitely a worrisome spot.

Weaknesses: Locker's transcendence hides a lot of weaknesses in this Washington team. The Huskies cannot run the ball (80th in YPA, 93rd in YPG), and most of the running yards come from Locker. Their defense, after an incredible performance against USC, has regressed to 90th in scoring D, 82nd in rushing D YPG, 105th in rushing D YPC, 102nd in passing D YPG, 111th in completion rate D, 113th in passing D YPA...safe to say Nick Holt's unit has a ways to go.

Still, I have too much respect for Locker to give the Bears overwhelming odds to win ths one. Add in what figures to be inclement weather and this final game should be a blast.