Share All sharing options for: Breaking Down the 2009 Cal Men's Basketball Roster 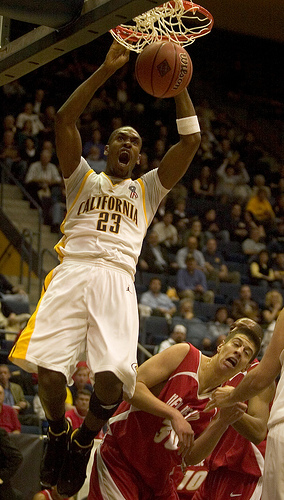 via farm3.static.flickr.com (Image from EOS Boy)

(We've been loving the feedback guys--33 responses so far! Keep it up.)

I hate to alarm you, but hoops season is under a month away, and practice kicks off Friday. Cal basketball is getting set to tip off a very big season, and it's time to start getting acquainted with these guys! Let's look at the depth chart, position-by-position.

Probably the biggest mystery on this team. Jamal Boykin played most of his time at the four last season, but slid over to the five when Jordan Wilkes was relegated to the bench for long stretches last season. Sanders-Frison could challenge for the starting spot immediately--he very much fills the Wilkes role, with a wider frame and stronger athletic ability that could ultimately make him more valuable.

It's uncertain what Montgomery plans here; if he decides to continue with the perimeter attack Cal displayed last season, the center position will probably remain a fungible position, plugged in with the tallest guy who can grab rebounds (6'8" Jamal Boykin and 6'8" Harper Kamp played plenty at the 5 last season). Sanders-Frison certainly fits that model, and based on Monty's assessment we could see him a lot this season.

"He knows how to play, and guys really like to play with him," Montgomery said. "He's got good hands, long arms, he outlets the ball well. When he gets deep (under the basket), he's really tough to stop."

The intriguing component is Max. He had a dominating University Games performance, routinely putting up double doubles as if he were the Chinese Dwight Howard. Of course, playing againt university kids from Dubai and Cape Town will be quite a different animal than dealing with Cole Aldrich and the Pac-10's best bigs like Michael Dunigan. However, if Zhang were able to show consistency in his game, he could be a huge asset and solve the problems Cal will again face at this position. Thankfully, other than Dunigan, the Pac-10 seems low on quality centers this season.

What are your preliminary thoughts on the Cal basketball roster? After the jump, we tackle the other 4 positions.

Although Boykin will be starting this season, the question will be "4 or the 5"?. If he sees starting minutes at center while the young guns readjust, it means relying heavily on Kamp at the 4, who is still not up to speed after his second major knee surgery in April. So you'd guess Monty would keep him at power forward, even with the inexperience at the center position.

Bak Bak is probably still a year away from contending serious minutes. However, if Kamp's injuries hold him back for extended periods, the developing Sudanese could definitely penetrate into the rotation, especially during non-conference matchups. Patrick Christopher is high on him.

Well, I call him Bak Bizzle. That's just a little something I came up with. He's originally from Africa [Kenya, by way of Sudan], and I was his [recruiting] host. He played in LA for a little bit in high school. Since being on campus, I've had the chance to play with him a little bit. He's very long, he can step out and shoot it -- a skilled player. So he'll be a nice addition for us.

Really, most of the intrigue comes at the 4 and 5 spots, because the bottom 3 is locked. Although I'd love to see big things from Amoke, barring injury the only thing he will probably get this season is a few more minutes here and there to spell Robertson. His time is probably a year away.

We know everything we need to know about Christopher. The only question is how much he'll rest he'll get this season--he averaged 33.5 minutes a game last season.

Gutierrez played a lot of the 2 last season, but also the 3 to spell Theo. Given his ability to handle the ball, Montgomery could trust him to move the rock upcourt as well, and he could draw several key defensive assignments with a year of experience on his belt. If he could show better offensive ability, it could alleviate the bench scoring issues and take much of the load off of the starting 4 seniors, plus make the Bears even more potent when they play small.

Seeley is still an unknown. Although he showed a lot of raw potential last season, he struggled with his shot as the season went on, forcing Christopher to bear more minutes to get some kind of offensive production. Carter isn't likely to see more than mop-up duty this season.

We shouldn't expect much of a change here, except maybe a little less minutes for Randle . He logged even more minutes than Christopher, going at a taxing clip of 35 minutes a game last year, and there were entire games where Jerome didn't see the bench. Although Randle never showed signs of tiring (and he has bulked up this season), you'd like to see a little more balance in minutes between starters and bench.

Like at shooting guard, he big questions at this position are behind the senior point, all centered around who can take off and win the backup job. Can the true freshman Smith immediately challenge Knezevic and win the backup starting spot? Nikola played well when he was called on last year, but it was very sparingly, at only six minutes a game, which makes you think Montgomery really doesn't trust him to carry the load for too long.

Enter the frosh from De La Salle, Cal's point of the future. Arguably, he'll get a great chance during the nonconference schedule to display his capabilities. Good play could assure him quality minutes, and ease the burden on Randle for carrying the load.

The pieces are in place, and for the most part our roster is set, with only a few questions marks hanging around our bigs and our bench.

But we've seen this story before, this season, in football--will Cal hoops be ready to win the big games? That issue's still very much up in the air.

(Note: In basketball terms, 1 is point guard, 2 is shooting guard, 3 is small forward, 4 is power forward, 5 is center).