Don't forget about our epic interview with Michael Silver.  It could bring a grown man to tears.  Especially if that grown man is Pete Carroll!  GO BEARS! 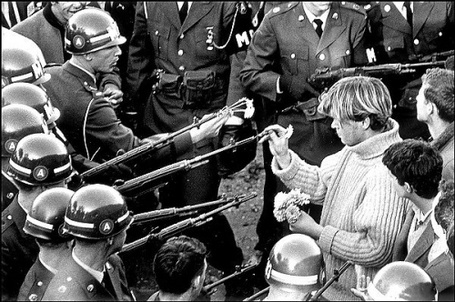 What has hat gotten us?  Just losses.  So, maybe now is the time to change.  What would Obama want?  Besides the indoctrination of our nation's school children in his red Soviet ways?

To put down our weapons.  To cleanse our heart.  And to open our hearts to the love of USC.  Yes, I know it's radical.  Yes, I know it goes against everything we've been taught and we know.  But it might just be crazy enough to work!

To that end, we've done a Q+A with our beloved USC friends, Conquest Chronicles.  Enjoy it with all the power love can bring to you after the fold.

1.   Truly horrifying news coming out of USC this week with the injury to Stafon Johnson.  How do you think his absence will change the game plan for the USC offense?

Probably not all that much, to be honest. I suspect that CJ Gable will see more playing time, as will Allen Bradford, who has the size to take on a fast Cal defense as well as speed when gaps open up. Marc Tyler is another alternative if SC needs to resort to 3 yards and a cloud of pieces of rubber.

2.  What were the problems that led to the loss to Washington and what changes do you think USC has made to correct them?

Appalling third down conversions, turnovers, and penalties. The third of these is not unheard of - at Washington in 2007, SC spotted Washington almost as many yards with penalties as the Huskies gained on offense. The third down conversions though were a new wrinkle; according to Doc Saturday SC is completing them at about half the usual rate. The turnover rate is similarly poor. And from a more qualitative standpoint, Aaron Corp had a shocking day at QB, which doesn't help.

Of course the problem is that you can't really cook up a defensive scheme that accounts for poor execution, short of "fall over as soon as you've got the ball / gone five yards." Having Barkley back at QB will at least open up opportunities to convert on third down because the Cal defense can't assume a running play every time. And while I'm not saying that Joe McKnight's gloves will have epoxy on them, it might be best for Cal players to be cautious about shaking his hands pre-game.

3.  The victory over Ohio State was one of USC's biggest in some time.  What did USC do in that game that was so successful and will we see similar strategies on Saturday?

It's not unfair to say that SC got away with one there, because Tressel was so conservative that there was still room to come back with one drive. I don't know that SC was specifically trying to force Pryor to throw, but that wouldn't be the worst idea against Cal since Taylor Mays is back in the rotation.


4.  Taylor Mays is back in the line up for USC.  Tell us what he means to this USC Defense.

More seriously, what it means is that SC can gamble on having him as backup to stuff running plays before they get out of control - in other words, if Best or Vereen waits out the inevitable over-commitment of the linebackers. If Mays takes a bad angle, that tactic can go badly wrong, but it does add an element of risk management for running plays... and while his INT rate isn't good, he's quite capable of breaking up passing plays. It's not so much the size he brings as the speed of arrival.


5.  I thought USC fans were supposed to be unrepentant assholes.  Why are you so nice to us?  Why must you make it so difficult to hate you guys?

It's a refined sense of cruelty that seems to be bearing fruit... that, and an attempt to prove that some of us have a sense of noblesse oblige that the bandwagon fans lack. Or something.

Do you dedicate yourself to love USC?