Share All sharing options for: Remembering the Seniors: Nate Longshore

We thought we should go senior by senior and take a gander at their Cal career.  Some photos.  Some videos.  Some stats.  And if HydroTech has any personal stories of his time with the team, he'd share them.  We start with Nate Longshore.

This site has often been accused of adoring Nate Longshore.  "J'Accuse d'Longshore" was often the rallying cry of our detractors.  Maybe.  Depending on what I actually just said there, it's unclear to me.  I took Spanish in high school.

The point is, if you hate anybody speaking positively of Nate Longshore, I suggest you stop reading.  Immediately.  I LOVE NATE LONGSHORE AND THE REST OF THE LONGSHORE IMMEDIATE FAMILY PLUS A SMATTERING OF HIS COUSINS!  Didn't I tell you to stop reading immediately.  You never listen to me, do you? 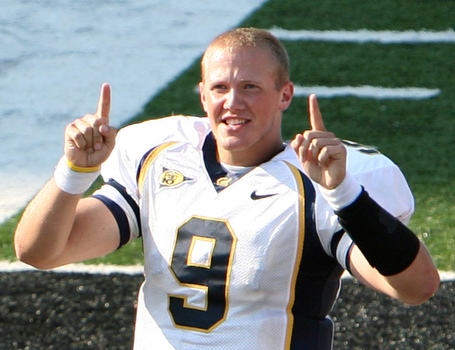 TwistNHook:  I know that a lot and I mean a LOT of ink has been spilled on the negatives of Nate, none of which has been spilled at his sadly neglected blog.  But in this retrospective roundtable, let's try to remember the good times.  The great times.  Like the Oregon 2006 game or the Oregon 2007 game.  Or, hell, even the Oregon 2008 game.  He seemed to have a knack for playing great against Oregon all throughout his career.  We should have taped an Oregon jersey to all the Miami players.  In 2006, he helped engineer a whupping of them.  In 2007, his play wasn't as good, it being on the road and all, but he still helped guide the team to victory, no matter how slim.  And in 2008, he came in for an injured Kevin Riley and threw the ball surprisingly well considering the elements.  The weather was crazzy that day, but he managed to move the ball and again guide the team to a solid victory.

So, what are your positive memories of Nate Longshore?

Yellow Fever: I liked Tennessee 07, and Oregon 07.  Before the ankle injury.  That was good.

Oh, and hey, I did join the "We Still Love you, Nate Longshore!" group on Facebook yesterday

TwistNHook:  Yes, Tennessee 07 was a great game by Nate.  I think when I think of Nate Longshore, the first thing that will come to mind is how he always pumped his fingers into the air.  Because God is a Cal fan.

I would also argue that UCLA '06 was the pinnacle of Longshore's career - it was our 8th straight win, we were rolling teams along the way, and it immediately preceded the loses to Arizona and USC.

Ragnarok:  Well, I think it's gotta be either that game or Oregon '07.  Statistically, Nate may not have performed at quite so high a level, but beating a Top 15 on the road has to count for a lot more than beating a Karl Dorrell-coached team at home.  Not only was it a steady, gutsy performance (plus, 0 turnovers to Oregon's 4), but it was also the largest 4th-quarter comeback of the Tedford Era.

Really, Nate has owned Oregon throughout his career.  In 3 games against the Ducks (all Cal victories), Longshore completed 55 of 96 passes for 610 yards, throwing for 6 touchdowns and just 1 interception, rushing for a touchdown as well.  Remember, too, that all three games were broadcast on ABC, and Oregon was ranked all three times.

CBKWit:  Yes, I would agree that the 2007 Oregon game was the bigger win - arguably that was the biggest win of the Tedford era.  Beating USC in 2003 put us on the map, and road wins at top 15 teams Michigan State and UW in 2002 showed that Tedford was for real, but Cal was flying under the radar in those instances.  When have we gone on the road and beaten a top 10 team with a lot on the line?  We haven't had a huge number of opportunities, but we lost at USC in 2004, at Tennessee and USC in 2006 and at USC in 2008.  Oregon was the exception and, regardless of the collapsed that quickly ensued, it seemed like a turning point for the program.


That said, while Nate led us to victory and certainly outplayed a legitimate Heisman candidate in Dennis Dixon, he wasn't spectacular.  He didn't see a wide open DeSean on the first play of the game, threw short to a wiiiiiide open DeSean on his first TD, and overthrew DeSean after Best recovered the fumbled kick off.  Even though we started 5-0 and had arguably the best resume in the country with wins at home against Tennessee and on the road against Oregon, Nate didn't seem quite right, and missed a number of throws. 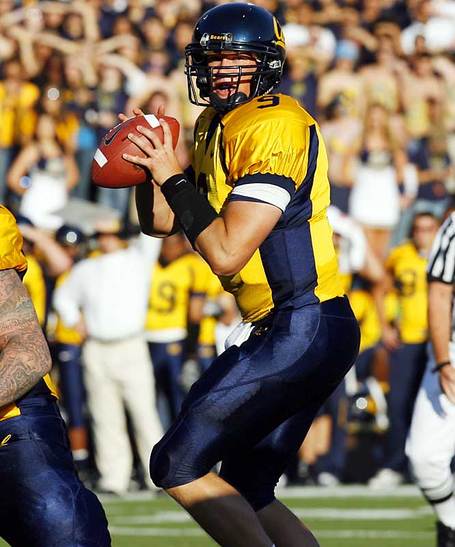 via patrickdonohue.freedomblogging.com
He missed MAYBE one throw against UCLA in 2006.  He threw only 3 incomplete passes out of 24; one was a perfect 50 yard strike to Robert Jordan, who was 10 yards behind the defense and let it bounce right off his hands.  Another was HydroTech's favorite pass of the game, a ball he threw away to avoid pressure.  The last incompletion I cannot recall - it may have been another throw-away, or perhaps he had 1 bad pass out of 24.

Watching that game, I felt sure Nate was going to be Tedford's next 1st round pick.  He was spectacular, and while he certainly led us to bigger victories, he never looked as good as he did in that game.

HydroTech:  Ya know, everyone ONLY remembers Longshore's pick-6 to lose the UCLA game in 2007, but nobody remembers that he started the game on fire.  He was 8/9 in the first quarter and lead the team right down the field for a touchdown.  He was also 8/10 in the second quarter with another touchdown pass.  Overall, Longshore, despite his injury, was a scorching 16/19 and 2 TDs.  Nobody ever remembers this.

Hindsight is (supposedly) 20/20 and nowadays, the Cal Fan consensus seems to be that Longshore shouldn't have started against UCLA in 2007.  Of course, the reasoning behind this notion is solely because of Longshore's game-ending pick-6.  However, if you had asked any Cal fan at halftime whether Tedford made a mistake in playing Longshore, the answer would have undoubtedly been a No.

So let's try to remember the good times.  They are so often forgotten because they are expected, much more common than the bad and essentially taken for granted.  On the other hand, the bad is rarer and more memorable because of the pain and agony.  Unfortunately for Longshore, his career in the minds of Cal fans will probably fall prey to this mental trend of only remembering the bad.  This is unfortunate because Longshore certainly had many great games.  Aside from the ones already mentioned, Minnesota in 2006 comes to mind.  Longshore finished that game 22/31 with 300 yards and 4 TD passes after the entire team got drubbed the week before against Tennessee.  Even in Big Game 2007, Longshore, despite some early struggles threw some extremely clutch strikes right down the pipe to Hawkins which could have tied or won the game had they not been dropped.  Longshore's career seems to be a big game of "what-if." 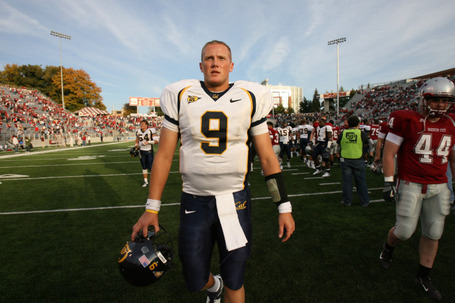 What if he hadn't gotten injured in 2007?  Cal might have gone to a BCS bowl.  Cal certainly had the talent and the team was performing like a BCS team.

What if Longshore hadn't gotten injured in 2005?  Longshore might have been even better in 2006 and Cal might have gone to a BCS bowl in 2006.

Longshore is a good QB.  Cal fans might have had expectations set a bit too high after seeing Rodgers and not knowing at the time that he was such a talent.  I hope Cal fans nowadays can see past the negative memories of 2007 and can remember the positives.  There are so many positives and great memories due to Longshore.  He should shine pleasantly in the memories of Cal Fans for years to come.  He certainly will shine in my memory.

TwistNHook:  Is "shine in my memory" what the kids are calling "include in spank tank" these days? 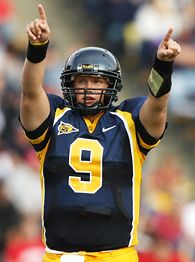 So, what are your memories of Nate Longshore and his long-defunct blog?