Use this thread as an open thread for the game today against ASU: 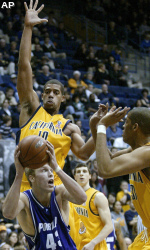 December has come to a close, January has just started up, the bowl games are beginning to wind down, and Cal fans have a long nine months until Cal football starts up again. But fear not, readers desperate for their Golden Bear fix: the end of football season only means that we're smack dab in the middle of basketball season!

In fact, it's been basketball season for nearly two months now, but I'm guessing a lot of people haven't really noticed, or only gave the teams' blowouts of Colgate and Texas-Pan American cursory attention. I don't blame you. But now, with Pac-10 play upon us, it's time to catch up with the team; with Mike Montgomery now the Bears' head coach, there hasn't been a better time to become a Cal basketball fan in quite a long time.

So how are our Bears sitting right now? Pretty good, actually. They're 12-2, undefeated at home, and owners of a couple of nice road wins against a schedule that, while not the most difficult in the world (Sagarin rates it only 233rd out of 347) was better than I expected back in June (I'd give it a 'B-', or maybe even a solid 'B'). Sure, home wins over Texas-Pan American, North Carolina A&T, Colgate and Dartmouth are all not only forgettable but RPI-killers as well, but teams like Pacific, USF, DePaul, Nevada and Portland all provided good, mid-level competition at home, and thankfully the Bears didn't lose any of these games; USF came within 5 points of winning at USC, and Portland, a team the Bears beat by 20, not only beat Washington, but Oregon needed overtime at home to get past them.

If the Bears find themselves on the NCAA tournament bubble, however, there are only 4 games on their non-conference schedule that the committee might look at: the Global Sports Classic at Las Vegas vs. UNLV and Florida State, the Big 12 / Pac-10 Hardwood Challenge at Missouri, and a road game Utah. The Bears won at 8-5 Utah and 12-2 UNLV, vs. the Rebels in convincing fashion, were nipped by a 12-2 Florida State team on a neutral court, and got blown out at 11-2 Missouri, admittedly their worst performance of the year. Still, losing on the road isn't nearly as bad as losing at home (and to quality, major-conference teams, no less), and the two road scalps they picked up are starting to look pretty good too. Utah has wins over Oregon, Ole Miss and now Gonzaga, while UNLV has picked up wins over Arizona and at Louisville.

Overall, it's a decent résumé. In fact, Joe Lunardi, ESPN's resident Bracketologist, had Cal as one of his last 4 teams in the field of 65 (an 11 seed) in his most recent bracket back on December 23rd. Are they a tournament team? There's no way to know that yet. Still, they've put themselves in a good position, and a decent run in Pac-10 conference play should secure the ticket to the Big Dance that's eluded them since Leon Powe turned pro. What's a decent run? I'd say 9-9 gets them in the tourney; 8-10 is pretty borderline, and they'd probably need a good showing in the Pac-10 tournament to feel comfortable.

Friday night's win against Arizona was a good start, however. I don't know that Cal will make the NCAA tournament this year, but I do know that I'm very, very excited about Cal Basketball for the first time in quite a few years.