TwistNHook: In moment #9, we finally look at an actual moment, instead of a series of moments. A 72 punt by Bryan Anger against ASU, not pictured below. 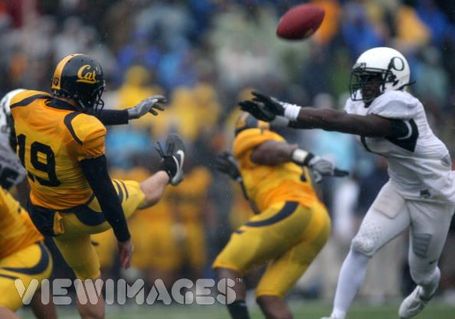 Damn, can a punter go pro early? I guess we're about to find out in 2 years, aren't we? Anger is a great punter and against ASU, his punting helped seal the deal. Remember, Cal's offense performed poorly in the second half against ASU. We needed our D and Special Teams to step up. Certainly, our ball-hawking D, led by the Pain Train, stepped up.

But so did the special teams, dropping punt after punt deep in ASU territory. The best punt from Anger's punt which rolled ever so gently to the 1. Some might say it was luck that the effect of gravity on its momentum happened to stop it at the 1. Others might say it was pure skill. I'm somewhere in the middle. I think it's mostly skuck.

Wow, that was a terrible, terrible joke.

HydroTech: And yet your wittiest joke ever. Look, punters don't go pro early.

Where punts are downed is also the work product of the gunners and any other members of the punt coverage team. Anger certainly had some fantastic punts this year, but let's also give a shoutout to the coverage team.

TwistNHook: I agree 100% that the rest of the special teams have assisted Bryan Anger ably this year. But we are discussing this specific punt, which, I believe, never was touched. Am I wrong in remembering it rolling to the 1 and stopping there? Do we have video evidence?

HydroTech: Perhaps you are right, perhaps it wasn't touched.

TwistNHook: Perchance to dream, perchance to sleep. But, aye, here is the rub. Is there video? 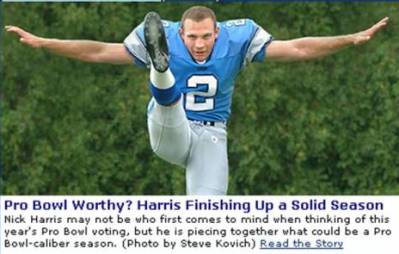 "Move aside, Nick Harris" via www.firemillen.com

Ragnarok: You're correct, Twist (there's a first time for everything, I suppose). The ball rolled dead at the one, which was probably why, of all the fantastic punts Anger had this year, this is the one we remember best. Basically, once the punt team gave Anger enough time to get the punt off, they could have sat down and picked grass out of their socks for all the difference they made. Even the punt return man was shocked, at first backing up on the punt and then giving up on it as it sailed over his head, bounced a few times, and came to a stop just before the goal line.

TwistNHook: Even a broken clock is right twice a day. I guess, unless the clock is broken in a manner that ensures it is never right.

Ragnarok: Well, perhaps we are both wrong. The game logs I consulted (at calbears.com and espn.com) both insist that the punt in question covered 72 yards, but was downed at the 5 yard line.

CBKWit: Bull. Shit. They are so wrong. It died at the one yard line. It was east of the east hash, at the north end zone. I remember it vividly. I wonder why those game recaps are wrong.

Wait. Anger had TWO 70 yard punts that day, and I thought they both were downed inside the ten. Perhaps one of them was downed at the 5 and the other at the 1?

HydroTech: CBKWit is right. Although I can't remember my own birthday, I do remember one punt died at north east corner of the field.

TwistNHook: I thought your birthday was December 25th, 0 AD, HydroTech?

Ragnarok: Yeah, I remember it too, which is why I checked TWO different play-by-play recaps.

7 punts, 3 downed inside the 10? That's not too shabby. A couple of big returns, though.

TwistNHook: Yes, but we arent talking about those returns, we are focusing on the punts here. And that play was all Leg d'Anger (except for the excellent blocking up front to give Anger time to kick). We are probably confusing that one punt that was downed at the 2 with the 72 yarder.

Ragnarok: Well, yes, but the lack or return was why this particular punt was so impressive; it was so long, and had so much hangtime, that it was basically unreturnable.

Oftentimes, a punter can "line-drive" a punt, getting more distance at the expense of hangtime, essentially out-kicking his coverage team and giving the return man an excellent opportunity to find a seam and set up a big return. Anger's 72-yarder, however, wasn't a low liner, and the distance didn't come from lucky bounces; as I remember, the returner had to backpedal considerably to try and field the punt, eventually giving up as he realized that the punt was going to sail over his head regardless of what he did, and that continuing pursuit of the ball would more likely result in a turnover than in a decent return.

CBKWit: Look, no need to argue over what punt was what. Thanks to the Patron Saint Of Awesomeness, Danzig, we can see it ourselves. It is at the 8:30 mark. Although feel free to re-watch all those highlights, including the Pain Train, because they are great.


ASU at Cal Highlights 2008 from nick sarkozi on Vimeo.