But before we go there, I guess I need to give some background info. 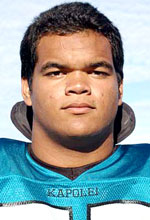 Stanley Hasiak is a huge 6'6" offensive lineman who is already 300+ pounds from Hawaii.  Rivals.com rates him as a 4 star recruit and one of the top offensive lineman recruits in the nation.  Hasiak was originally committed to UCLA but recently changed his verbal "commitment" to Cal.

If you don't have a Rivals.com subscription, you can watch some Hasiak highlights on YouTube (below).  Hasiak is mostly at LT (left tackle) in the highlight video below (which appears to be put together by Hasiak's highschool coach - note the Hawaiian area code at the very end).

There's not actually a ton of film on Hasiak but here are my thoughts:

(1) Plays with a good wide base.  Hasiak plays with his feet nice and wide.  He has a stable foundation on pass blocking.

(2) Moves his feet quickly.  When required to move with the defender, he actually moves very quickly for a guy of his size and weight.

(3) Uses his hands very well to neutralize his opponents.  When Hasiak gets his hands on pass rushers, he locks them up with grasps and counters to their swim moves and spin moves.

(4) Gets low and gets leverage.  Hasiak squats and gets to a low playing level despite being 6'6".  He gets great leverage on his opponents and can easily stand them up.

(5) Great strength.  Arms and body.  Hasiak's strength allows him to match up against heavier opponents.

(6) Doesn't lean and over-extend himself on pass blocking.  Unlike a lot of lower level recruits, Hasiak doesn't lean on his defender as he's pass blocking them and allow his leaning to be used against him.

Overall, it's pretty easy to see that Hasiak is quite a talented player.  He's pretty good at pass blocking for a high school player.  On his run blocking, he seems to get off the ball decently fast.  I don't think there is much of an issue as to whether he is division 1A football material.  He certainly has potential to be an impact player with further conditioning and coaching.  A great pick-up for Cal - assuming he sticks through with his commitment.

I definitely concur with a 4 star rating.