Cal Basketball Manages A Split, But Something Seems Missing

Share All sharing options for: Cal Basketball Manages A Split, But Something Seems Missing

In my immediate postgame reaction, I wrote the following:

Y'know the Cal team that swept the Arizona schools at home, then beat the Cougars in Pullman and outlasted the Huskies in Seattle?  What happened to that team?  I think I saw them play at Maples last week, falling just short, but I don't know where they've been this week; certainly not at Haas.

I was having difficulty putting my finger on it, but there was definitely a feeling of the team having regressed somewhat over the past couple weeks.  Now, I should be careful to avoid gloosing over the warts of the past; the Bears, though very good, were not perfect in winning their first 4 conference games (during the second half of the Washington game, I said "worst shooting i’ve seen since the Missouri game" in the open gameday thread).  Still, something seemed missing in the effort put forth by the Bears against the Oregon schools this week, and I set out to find out what.

The most obvious hindrance for our Bears was health, as Randle was questionable for the Oregon game after bruising his hip against Oregon State and Kamp was playing with (more) pain in his knee.  Kamp's absence would certainly thin our already less-than-idea frontcourt, and missing our starting point guard might well be tantamount to disaster.  Fortunately, Randle was able to go, and other than perhaps a little dialing-down of his legendary quickness, he looked pretty good to me; 22 points, 5 assists and only 1 turnover will attest to that.  Kamp, however, was limited to just 8 minutes, though that probably had a lot to do with Kamp getting in foul trouble early. 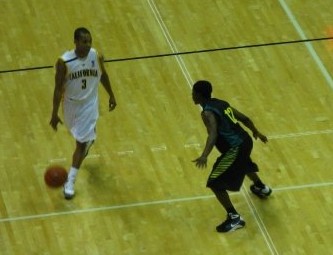 From the stands, it was hard to notice that Jerome Randle was playing through pain.

So what was missing?

Well, one thing that was missing Saturday was the Bears' outside shooting.  No, their accuracy wasn't bad; rather, they simply seemed to ignore that part of the game, making just 3 of 8 attempts from three-point land (both makes and attempts tied a season-low).  Of course, with the Bears shooting 27-37 (73%!) from inside the arc, scoring inside did not seem to be a problem, so much so that it didn't even make much sense to try more than a couple threes, just to demonstrate that they could. 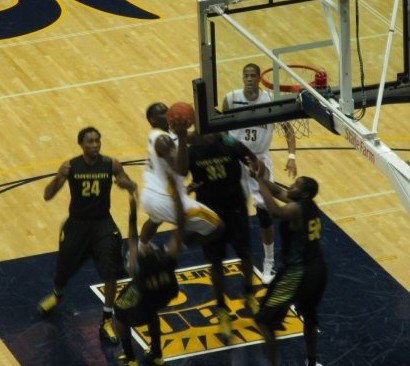 Scoring inside was not a problem for our Bears on Saturday.

Of course, this was a complete 180° from the previous Thursday, when the Bears jacked up a season-high 24 three-point attempts, making a season-high 11.  Unable to penetrate the Beavers' zone effectively (must...resisit...obvious...joke...), the Bears relied on their outside sharpshooting to carry them, and for most of the game, it did.  With 9:37 to go, they held an 11-point lead, having made 10 of 18 long-range attempts.  However, they would shoot just 1-6 from three down the stretch, and as the Bears would be completely unable to score inside, they would be outscored 18-3 over the rest of the game.  Teams that live by the three often die by the three; perhaps their gameplan against the Ducks was an extreme reaction to their failure against the Beavers.

You know what else seems missing from the Bears lately?  Backup point guard Nikola Knezevic.  He certainly hasn't been playing heavy minutes this year (backing up Jerome Randle in the year Randle finally puts it all together will do this to a guy), but lately, he's completely disappeared.  After playing 8 minutes in each of the Bears' three Pac-10 games (right around his season average at that point), Nikola just played 3 of the 55 minutes the Bears played at Washington, and he hasn't played since.  So?  Nikola was hardly denting the box score when he was playing (averaging less than a point and a rebound a game), but he was at least competent in tending the point while Jerome rested on the bench.

So with Nikola on the bench, that means that Jorge Gutierrez is handling the ball a lot more.  Now, I like Jorge's energy; he's definitely got more offense than Nikola, and his defense is, I think, at least comparable.  But man, sometimes he can be wild, and Thursday against the Beavers, he committed 4 turnovers in 16 minutes, including 2 critical ones that aided Oregon State's comeback effort.  He coughed up the ball twice more in 10 minutes against Oregon on Saturday, though he did add 5 points, a rebound, and assist, and a ton of hustle.  I guess that's the tradeoff that Montgomery has decided to make; right now, I'm not sure it's the best one.

What's interesting though, is that in benching Nikola, Montgomery hasn't handed more minutes to Jorge.  In fact, Jorge's minutes have been down the last couple games as well.  Where have they gone?  Well, it took me some searching, but it turns out that most of the minutes have funneled towards the Bears' starters.  Just look at the starter's game-by-game minutes played:

I'm not sure what's going on here, and I completely missed this trend until I actually sat down and ran the numbers, but it sure looks like Monty doesn't trust his bench (at least beyond Kamp and Gutierrez) and in the process might really be wearing down his starters.  The Pac-10 season is definitely a marathon, not a sprint, and I'd hate to see these guys run out of gas with several weeks to go.

Beyond the numbers, what have I noticed?  It sure seems like there have been a lot more lazy passes lately.  The Bears have shown themselves to be a very good passing team this year, but against Oregon, there were quite a few lazy, ill-advised passes that ruined scoring opportunities or turned into easy buckets for the other team, and a few others that I thought the Bears were very lucky to get away with.  I've seen Cal excell this year at making the extra pass to get an easy bucket inside, but those passes have to be good ones.

Finally, I really want to share this postgame quote from Mike Montgomery; I think it's at least somewhat illuminating.

On the daily effort to continue to improve as a team:
"I think we're improving. Basketball is a little bit like golf, your handicap. You can get to a certain point pretty fast, and then it gets hard, because the things that you need to do better are not easy things to do, they're things that you if you could have done them in the first place, you would have already done them. They're buying in on defense, they're trying to play hard together... We're executing a little bit better as time goes. Now you get to the point where there's little things that are hard to do. But by and large, they've been receptive."