Addicted To Quack was claimed in the name of UC Berkeley on January 20, 2009, by California Golden Blogs. This led to a happy time. But, all empires inevitably run their course. Now it is time for LIBERTY!!! YARRRRR!!!! 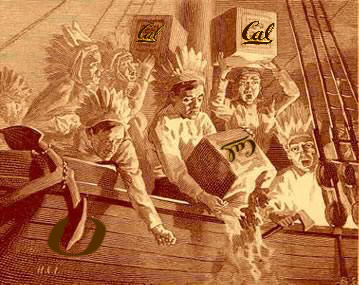 Now, as we all know, this paper alone means nothing. We will go to war, if we must. But I come as an emissary, in peace. We do not this struggle to escalate. But we have the power to win our independence. While in the North, TwistNHook failed to secure the only weapon capable of defeating Addicted To Quack, "The Banhammer." While he slept, it was taken from him. With this weapon, we take back our autonomy, for the freedom of our women and children!

Also consider yourself fairly warned, I, Dave, have come back from his self-imposed exile to lead us in this battle.  Blood will be shed, men will be lost, but should our deposed tyrant not retreat peacefully, I will not rest until I hold his scalp high above Strawberry Canyon.

I think that I'm supposed to put some Bear news here or something, but I'm not going to. Dump away!