Well, today was the big day.  The Big Game.  Cal versus Stanford.  Anytime it's an opportunity to beat Stanford, it's always a good time out!  Unless Stanford forfeits in Rugby.  That's just lame.

But there was to be no forfeit today.  No, instead we were to have a great contest, between two great teams.  The seating at Haas Pavilion for Women's B-Ball games is generally general admission.  So, I made sure to get to the game early.

When I got there, there was a bit of a festival atmosphere outside.  All being overlooked by The Great Oski: 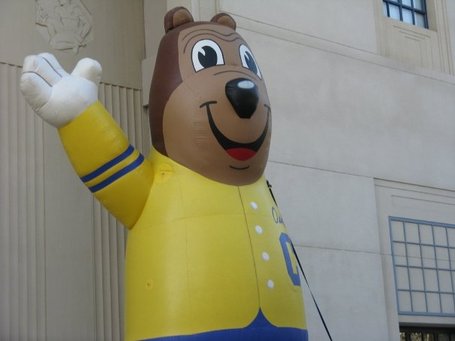 Sure, The Great Oski looks happy there.  But if he doesn't get his 3 goat sacrifices a day, he gets mighty angry.  You do NOT want to see him uphappy.

There was tons of fun stuff going on, including Cheer SF: 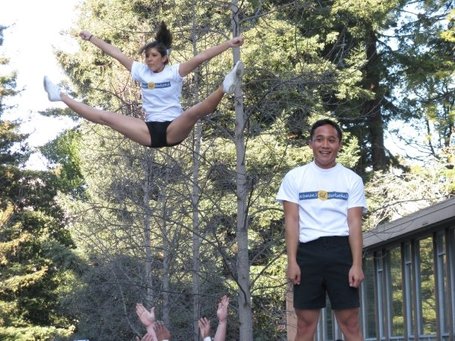 "Here's hoping the twain do not meet!"

You gotta give it up to Cheer SF.  They have these perfectly executed maneuvers that are very impressive. 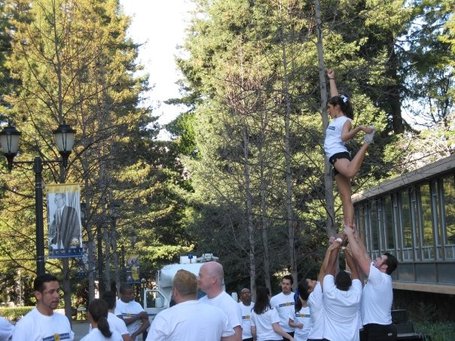 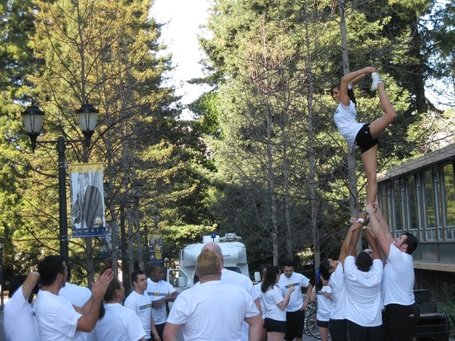 But I still can't get past their happiness!  Why are they so happy?  I can't handle their perpetual effervescence.  So hopefully.  And positive about the future!

If this is how the Obama presidency is going to be, count me and everybody else who is incapable of expressing emotion out.  We need cynicism and failure to be happy, not this pollyanna BS.  I'll be happy when I see a grandmother fall down a manhole and not a moment sooner!

So, I propose that Cheer SF stop being so delighted about stuff and just do their perfectly executed daredevil maneuvers with a smug sense of indifference.   I can better understand smug senses of indifference.

The band was out there playing with the entire dance team: 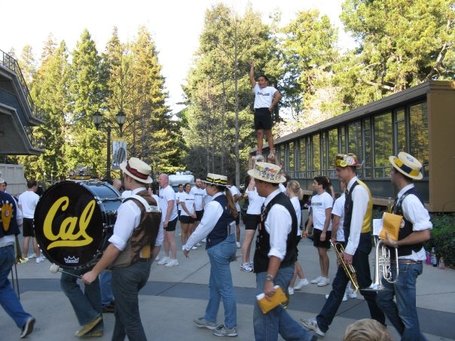 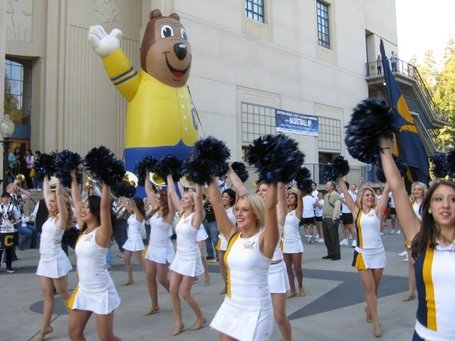 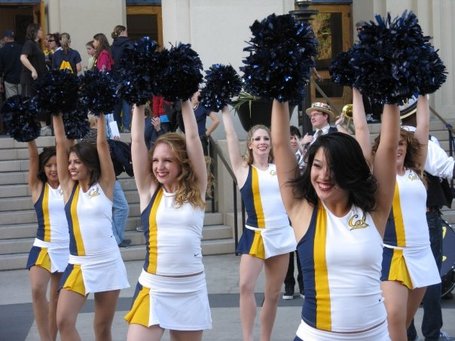 As we were watching the show, I noticed Jordan Wilkes wander by. 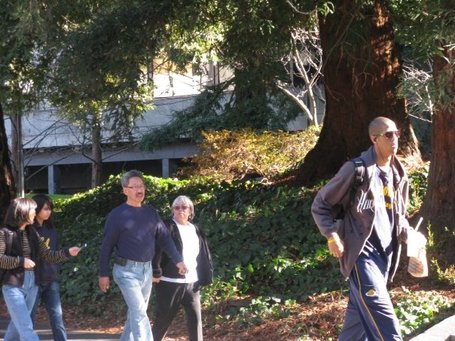 He's tall, isn't he?  Last year I saw most of the men's team at the women's game v. Stanford.  I can only assume that other men's basketball players were there, too. 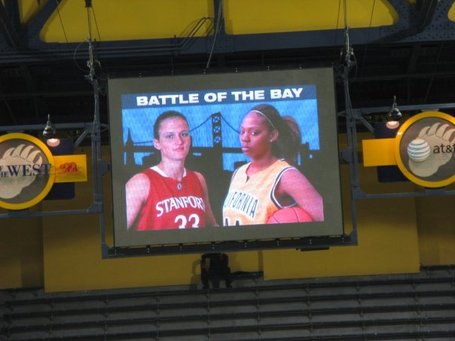 You know, we had to get there early.  Since it is general admission for most of the seats, you need to get there early to get good seats.  I had planned to meet CalBandGreat at 2 PM, an hour before gametime.  He ultimately was unable to make it to the game, which left me in the uncomfortable position of being that creepy guy by himself with the camera at the women's sporting event.

I hate hate HATE being that guy.  Luckily, since God was willing to look past that whole "My people killed your son" thing, I bumped into Mr. and Mrs. PaleoDan.  So, I glommed onto their motley crue (any idea how to do umlauts here or even how to spell the word umlaut?).  We got in there and got seats right behind the backboard.

Generally, the seats were great, although if a player was shooting from the top of the key, my vision was blocked.  The teams came out to warm up. 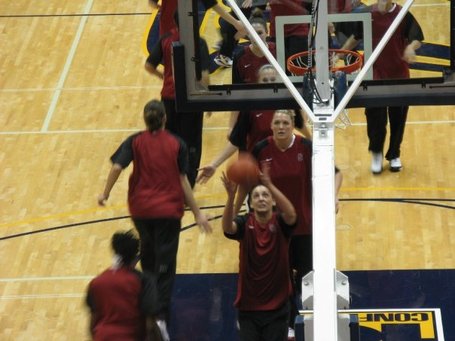 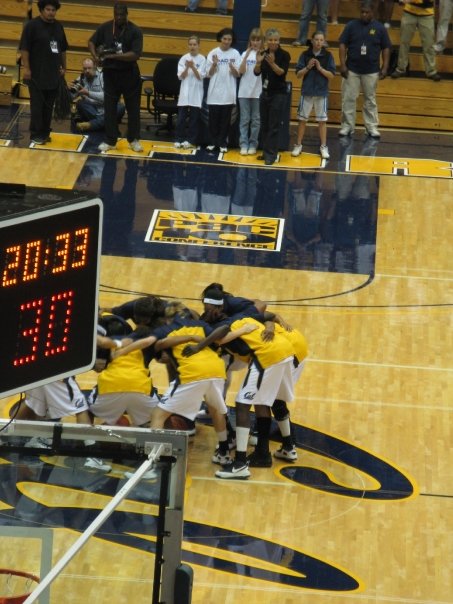 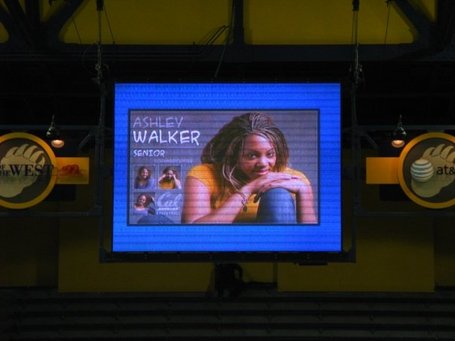 The Stanford band was there.  Waaaaaaaaaaaaaay up there.  This marching band mutually assured destruction hurts us all!  We need to stop this cycle of violence!  Stand up!  Sit down!  The politics of failure have failed!  Do something!  I dunno, I'd be a terrible protester, what with my smug sense of indifference. 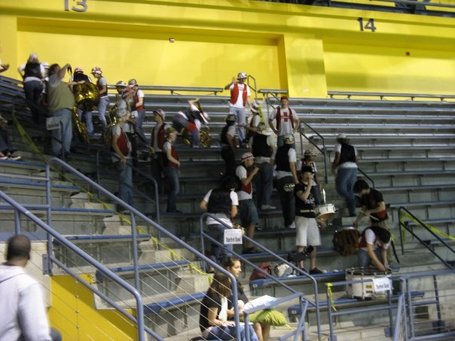 If it makes you feel any worse, they actually had more band members than Cal did.  Le sigh!

Notice how patriotic our Cal team is with their horizontal line for the Pledge Of Allegiance. 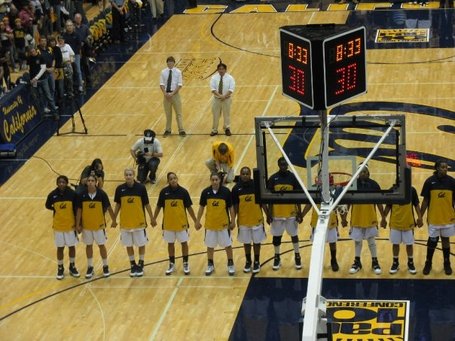 But Stanford has a bunch of commies with their vertical line.  And red clothes.  I mean it's so obvious.  If only McCarthy were alive today!  He'd be 140 years old and really angry at the Stanford women's b-ball team. 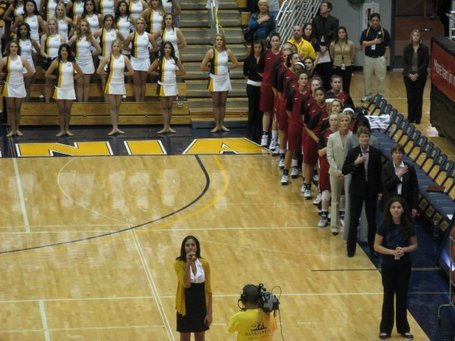 This is the coaching staff for Cal.  Coach Boyle is second from the right.  She is extraordinarily animated out on the court.  One time, she ran halfway out to argue a foul call and the assistant coach on the far left had to literally grab her around the waist and drag her back towards the bench. 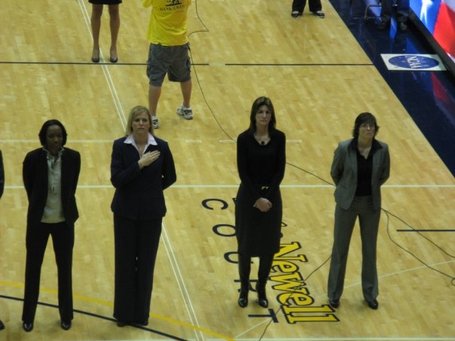 Devanei Hampton (in the middle) has a bionic leg! 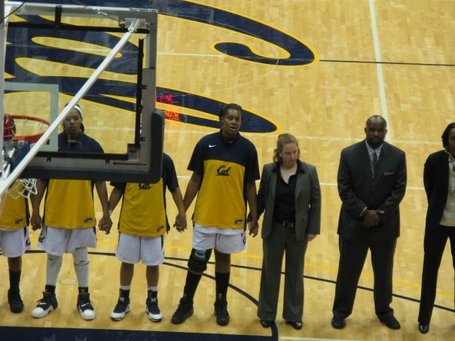 Since we were behind Stanford's basket, we quickly experienced a blue and gold balloon explosion to help distract them on free throws! 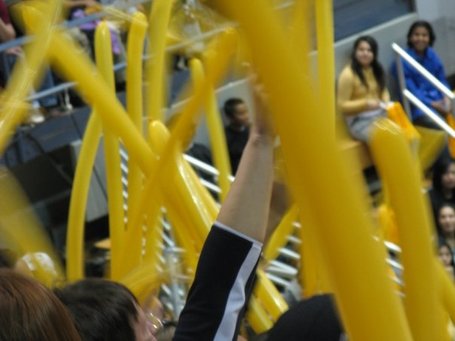 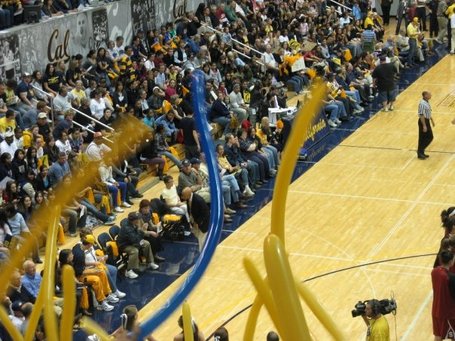 Man, this is a LOT of photos and I haven't even gotten to any game action!  But we were almost ready to go.  Just had to announce the team! 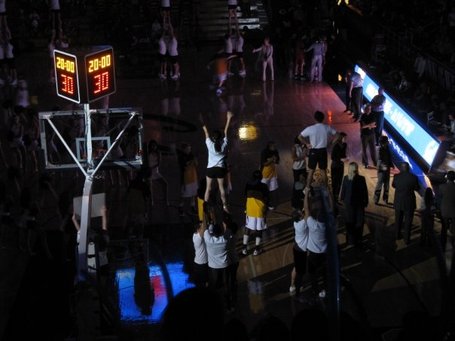 Of course, I had to take a tab of LSD while the team was being announced.  It really changed how I perceived things: 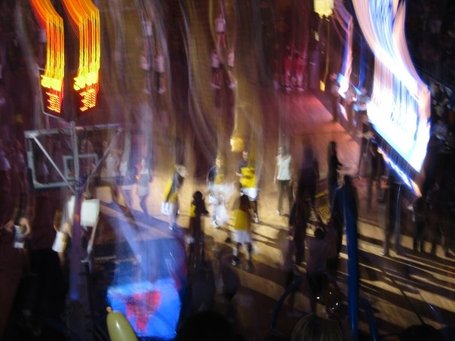 I don't have a lot of first half game action, because we were right in front of the Stanford basket.  Who wants photos of Stanford doing well?  Who are these people?  These freaks!  Here's a few shots of Jayne Appel shooting some free throws. 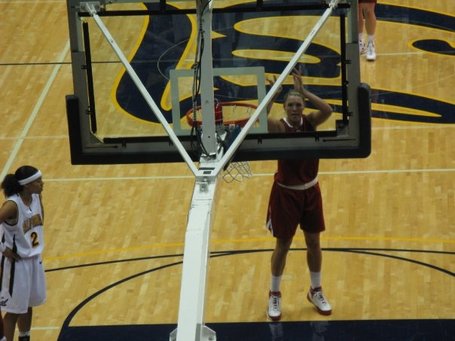 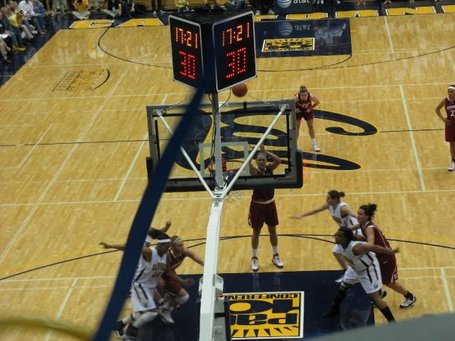 For those who did not watch the game, Jayne Appel (apparently pronounced Ah-pel, although I continue to mistakenly call her Apple) is the leader of the Stanford team.  She had 18 points and 8 boards.  She was a beast down low.  But if you look at her, you can see why.  She stands 18 feet tall and looks roughly like this: 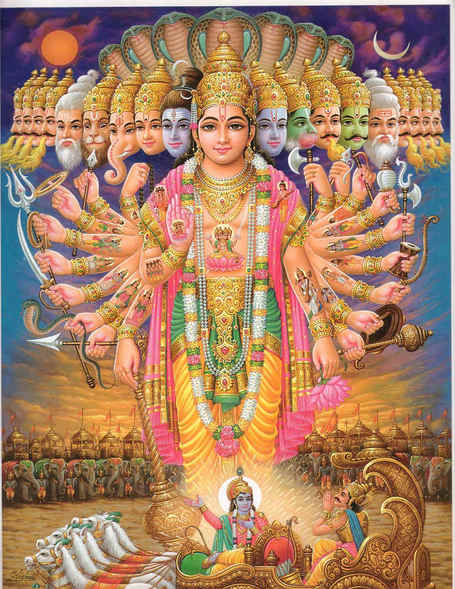 I know she technically wasn't holding that many axes, but it always seemed like the ball was rolling into one of her many arms.  And I swear she had at least 1 cobra!

I said the other day that I felt Cal could shut her down.  Unfortunately, I was wrong.  I also said I thought Stanford could shut Ashley Walker down.  I was right about that.  Mostly since they quadruple teamed Walker all the time.  They were B-R-utal to her.  Check this elbow to the back of the head out: 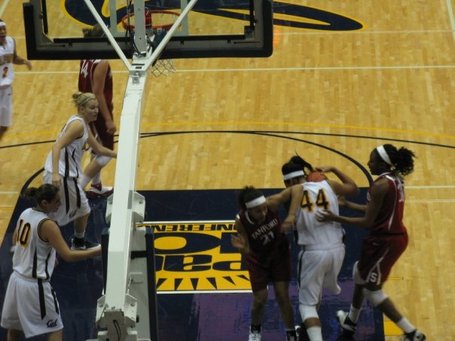 It can get VERY rough down low.  There were always bodies laying on the floor around the basket.  It seemed a lot more physical than a men's game.  Or, alternatively, they grease up the floor, so more players fall over.  That seems hilarious to me, especially if they blast Yakety Sax while it's all happening.  It's because I have a smug sense of indifference. 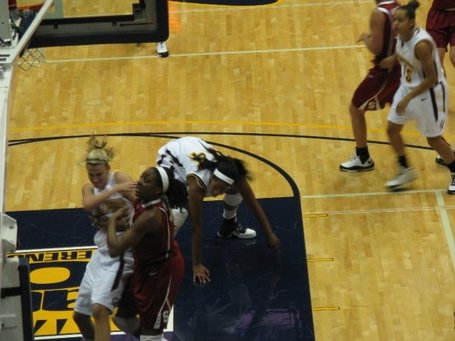 Bee Tee Dubya, for those who haven't been to a game at Haas this year (and this was my first), they've upgraded the ads below the announcing table.  They are digital now: 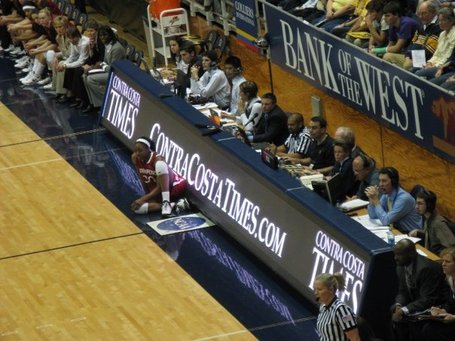 To bad they didn't advertise for the CoCoTimes with the following tagline: 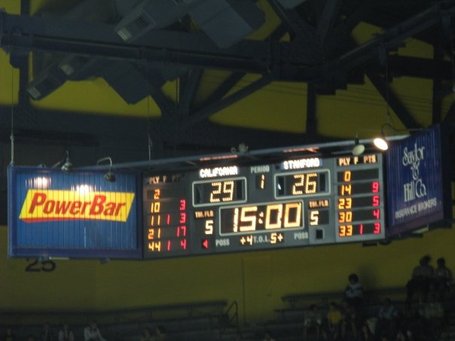 Soon, it was halftime, Cal up 29-26.  Note that 44, Ashley Walker, only has 4 points.  Like I said, they were doubling her.  That opened up tons of others players for shots.  Some were sinking them, like 21, Alexis Grey-Lawson.  Others, unfortunately, were not, even if they were wide open.  Cal was up about 6-8 for most of the latter portion of the 1st half.  But then we missed a few key open shots, Stanford had a short burst and jumped right back into it.  They had all the momentum going into halftime.

This was a very crisp game with few fouls.  Nobody fouled out.  Few got to 4.  But there were so odd foul calls.  A lot of traveling calls.  I mean a LOT.  I've never seen so many traveling calls.  Am I to assume that Cal and Stanford are terrible ball-handlers?  I doubt it.  It was just an odd focus for the refs.  More on the refs in part II.

We had reached halftime and what happens at halftime, but performances.  Performances by the bands, by the various dance troupes, and, of course, by The Tree. 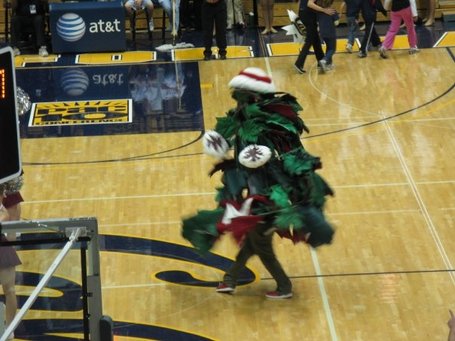 "I hate you, The Tree!  You are bad as mascoting, The Tree."

Yes, The Tree.  More on him later.  Check in soon for Part II, including The Ultimate Honk!