Share All sharing options for: Pac10 Roundtable - We're Back!

We murder a rhyme one word at a time
You never, heard of a mind as perverted as ours
You better, get rid of that nine, it ain't gonna help
What good's it gonna do against a man that strangles himself?
I'm waitin for hell like hell [heck] I'm anxious as hell 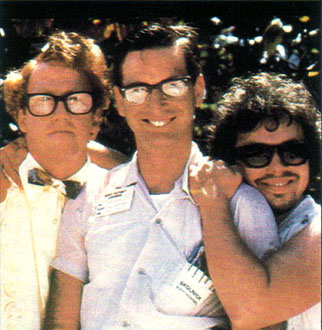 Yes, it's true. The rumors, you've heard them all, they are true. We're back. The Pac10 Roundtable is back. And we murder rhymes one word at a time. Well, I murder than at a much faster rate of speed. But that's neither here nor there.

Long story short, we took a bit of a hiatus for XMas, New Year's, Ch-ch-ch-ch-chanukah (not necessarily in that order), but now we are back. And about the same. We got some football questions. Some deep, personal questions about what we really want out of life. Also b-ball questions.

Oregon State will be represented by Building the Dam. The Washington schools chime in with CougCenter and our newest SBN blog, UW Dawg Pound. Conquest Chronicles and What's Bruin, Dawg? corner the SoCal market. Finally, Pitchfork Nation comes to us from the hot state of Arizona.

Behind the fold, find the questions. And, to a much lesser extent, the answers. We brought our heads together to bring you these bad boys, so I hope you enjoy them!

1. Cal fans are getting pretty hyped about their women's b-ball team, which could prove to be special this year. Any of you guys getting excited about women's basketball in your respective fanbases?

Well, I wrote this one, so it makes little sense. Cal fans are excited, so are Cal fans excited? Nonetheless, I'm totes planning on going to Cal-Stanford this weekend. Could decide the Pac10 title. Stanford has been the big dog, but now Cal has a chance to take over. We're already a medium to large dog, but can we be the big dog? I sure hope so. Tickets are only 10 bucks, you can sit incredibly close to the action, and its going to be a great game. I went last year with CBKWit, Ragnaroks, AndBears, and others and it was a great atmosphere. Close game. Had this to say.

Look, long story short, its a big weekend for Cal-Stanford b-ball. Let's win them both!

Cal! Yes, our defense will probably be not as good next year. Tough to replace 3 NFL-level LBs. But we still have players to step in like Mike Mohammed and Eddie Young. Also, we believe that the DLine, led by Cameron Jordan, and the DBs, led by SydGOD, will be even better than before.

As for the offense, well if Best can stay healthy, he'll be a Heisman candidate. Our RB depth is astonishing, too. The key here, the passing offense. And the most charitable thing I can say about our passing attack is, well, it can't get worse.

I think that this year if we had even a mediocre passing attack, we might have made it to the Holiday Bowl. Now, that's a prety big "if" out there. Fair enough. But for next year, I think it will improve (it certainly can't get worse!). Sure, our D will be a little worse, but I think the increase in offensive production will be enough to offset the decrease in defensive production.

Plus, we get USC early in the year at home. As compared to our usual November battles. Hopefully, we can finally beat them this year! And hopefully, that victory will catupulte Cal to a great 2009 season!!!! Go Bears!

So, while I am extraordinarily willing to talk major smack based on the fact that the Pac10 went 5-0 (well, except for the Rose Bowl, god I wanted USC to lose, Pac10 superiority be damned, ITS USC!!!!), when you take more than a cursory glance at the situation, it is not as impressive as you might think.

Nonetheless, don't tell anybody about this. Let's keep lording it over other people. This and the weather. It's been like 70 degrees all week. I could go this global warming. Global warming and Pac10 dominance, two great things that go great together!

4. Which is more likely in Pac10 B-Ball this year. OSU finishes 9th or better in conference, or UCLA doesn't win the conference championship?

Well, OSU, for all of its failings, did beat USC. That shows something. Oregon seems to be more likely to get 10th place. There is a lot of schedule left, but beating USC shows more hope and change for OSU than anything Oregon has done. I guess Ernie Kent does bring as much Hope and Change as Craig Robinson.

As for UCLA not winning the conference championship? The Pac10 seems to be down this year. Arizona isn't as good. WSU isn't as good. Stanford isn't as good. Cal and UW have improved. And ASU is right there. USC might be up there, but UCLA just beat USC (at USC!). Given that some mediocre teams have improved to decently good (UW, Cal), several good teams have regressed (Stanford, WSU, Arizona) and the still good teams (ASU, USC) don't quite seem to be on UCLA's level, it looks like it'll be yet another Pac10 Championship for UCLA this year.

We'd certainly love for Cal to knock UCLA off that perch, but perhaps not this year. Just making the tourney would be good for most Cal fans, let alone winning the Pac10.

5. Rumors are swirling that Stanford's coach, Jim Harbaugh, might be leaving to take a NFL job. Do you think he'll leave? Independent of that, do you want such that he leaves? Discuss your answer.

Well, now it appears that he is staying.

Note what he says here:

"I have no desire to coach anywhere besides Stanford at this time."

That's an out so big, even Coach Mangino could waddle through it. Anytime in the future could constitute not at this time anymore. Even now. Or now. OR NOW!

You don't really interview with the Jets (or Yets if you are Rishi), if you plan on turning them down at the end of the interview. "Hey, thanks for the offer, I just wanted some more interview experience for the job I'll never need since I'm staying at Stanford until even Joe Paterno and Bobby Bowden think I need to leave."

Honestly, Harbaugh appears to be a competant coach. I hate that in opposing coaches. I like non-competant coaches like Buddy Teevens and Walt Harris. Bring more non-competancy to Stanford, I say! Sure, Harbaugh hasn't made Stanford a powerhouse, but he's made them respectable AND they did beat us in Aught Seven.

I hope they get a new coach soon. One that approaches problems with an enthuasiam actually known to all mankind.

So, there are our answers. What are your answers?

Also, AtQ has taken over to do a SBN Blog B-ball Powerpoll amongst the Pac10 blogs. Not sure who is and is not voting here (although I can guess who isn't voting), but here are the final tallies: