So an amazing thing happened a few days ago.  No, not the fact that we beat UW in triple overtime.  But the fact that CBKWit actually wrote up a blog post!

Not being a guy to be outdone, since it's been a while since I've posted I've decided that I should write a post as well.  For those of you wondering where I have been lately, well, since LOST is starting up again, I got on a flight headed over a big ocean with the slim hopes that it would crash on a warm (seemingly) deserted tropical island with polar bears, big black ghostly clouds that killed people, and my very own Kate.  Unfortunately for me, my United flight did not crash.  It instead landed on a tropical island that was not deserted, did not have polar bears, did not have big black ghostly clouds that killed people, and there was not a Kate waiting for me as I disembarked the plane.

On the positve side, I did get leied.  (Aren't my jokes epically better than TwistNHook's jokes???)

So now, I'm back on the mainland, and back in culinary school, and back to writing blog posts before TwistNHook fires me and hires Thoroughbred instead.  (Note to Thoroughbred: CHILL OUT).

This time, I thought I might give my amateur thoughts on new OL commitment Charles Siddoway. 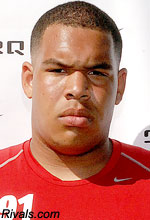 For those of you who don't know who he is, he's a mammoth 6'5" offensive tackle who weighs 300+ pounds already.  He runs a 5.2 second 40 yard dash, which is pretty damn good for a highschool kid of his weight and has a vertical jump of 25 inches which is decent.  Rivals.com rates Siddoway as a 3 star recruit and more specifically as a 5.7 point talent (more information).

My thoughts on his film after the jump...

(I can't post the videos of his Rivals.com highlight reels without violating copyright law or without Rivals.com suing us or something.  And if Rivals.com sued the CGB, that would mean TwistNHook would be our lawyer and the resulting massacre would be worse than this (SFW Youtube video with sound).  However, you can look at this Youtube video and try and pick out Siddoway who is the LT, #78, on the dark jersey team).

(1) Excellent burst off the line.  Shows great quickness off the LOS.

(2) Incredible arm strength.  Just absolutely mauls defenders with one push of one arm.

(3) Potentially can take out two defenders since he frequently obliterates the first defender.  This probably won't happen in college though as since he'll be up against tougher competition.

(5) Relies on arms too much and will have to use legs more.  Being as big and strong as he is, he usually just pushes defenders aside or engages them with his arms.  This won't work as much in college and he'll have to rely on leg drive to gain his advantage rather than pure arm strength.

(6) Over-extends and can get chucked easily.  This is sort of related to point 5 above.  Because Siddoway likes to engage with his arms, he often over-extends and reaches out shifting his center of balance forward too much.  As a consequence, he doesn't have the widest base and can get chucked easily if the defender sidesteps a bit, grabs Siddoway, and uses Siddoway's momentum to throw Siddoway forward bypassing the block.

(7) Plays snap to whistle.  Siddoway finishes plays and doesn't give up until the whistle is blown.

I like what I see.  Siddoway has the body and strength to be great.  Now he just needs the tutoring to become even better in regards to his technique.  I would say Siddoway is definitely at least a 3 star prospect although he could also probably be a 4 star prospect too.  FYI, Rivals gives 4 stars to a 5.8 point rated prospects, and Siddoway is rated as a 5.7 so he's almost verging on 4 stars.  I would label Siddoway as a fairly high potential prospect who can definitely make an impact on a team as a starter a few years down the line.