The Few, The Proud, The CGB All-Pac10 Team

Share All sharing options for: The Few, The Proud, The CGB All-Pac10 Team

"We call this the Bears Necessity Award!"  via static.flickr.com

So, they say that these days the concept of being honored doesn't mean much anymore.  Anybody and everybody gets an award for something.  Even if you suck, you still get a ribbon for "BearsNecessity".

But me, well, I don't accept that.  Not at all, hussy!  I'm incredibly competitive as is.  I bring it, no matter what!  You should see me in yoga, heckling people left and right.  "YOU CALL THAT CHILD'S POSE!?!?!? LET HURRICANE TWISTNHOOK SHOW YOU HOW CHILD'S POSE IS DONE!"

You might think that its a bit inane of me to mock people over child's pose.  But that's only because you've never seen me DOMINATE it.  And don't get me started on my tree pose!  Seriously, don't, I'll ramble for like 30 minutes about the mystifying  differences between Bikram Tree Pose and non-Bikram Tree Pose.

So, when we saw this endless array of utterly inane college football honors (except for the Draddy Award, that counts for something), we knew we had to do something.  We had to help cut through the cutter.  So, I hung up on my bookie as I tried to place a 3 team parlay bet on the Special Olympics (I.................have a problem) and worked with my fellow California Golden Bloggers to help draft the best and brightest in the Pac-10.

Firstly, don't question me.  I'll cut you.  I will.  Secondly, to create the newest, most prestigious honor out there, the California Golden Blogs All-Pac10 Team.  All recipients of this honor will win little more than our appreciation, but hey we figure if it was good enough for Illinois governer Rod Blogoawfjajftoupee, it's good enough for these fine football players.

After the fold, we discuss the best player at their positions.

That "other" Will T. finally flashes the skill and ability that we have been waiting for all along.  He leads one of the most potent passing attacks in the Pac10.  Although, to be fair, it was a real down year for Pac10 QBs.  His only other real competition was Mark Sanchez.  We went with Tuitama because we really hate USC a lot and figure that spite and enmity should be important factors in determining year end awards.

Thomas actually had a better year statistically in 2007 than 2008.  But even though he might have put up better numbers in 2007, he was still brutally dangerous in 2008.  Remember in his game against Cal, he'd get those shadow passes on the sideline, shed 3 tackles and be 14 yards downfield before you could breathlessly curse the name of "ANTOLINNNNNNNNNNN!"

Thomas is a beast of an athlete and could break a TD from anywhere on the field anytime.  Everytime he caught a pass against our beloved Golden Bears, I was impressed if we held him to anything less than a TD.  Thankfully, he is gone after this year.

Stroughter was finally healthy this year.  He has had a LOT of injury problems in the past.  Last year he suffered from a lacerated soul.  But he was back and in a BIG way this year.  OSU had a lot of weapons this year with the Brothers Rodgers and Pete Alamar, but Stroughter might have been the most dangerous.  He had more TDs and yards than Thomas.  And he did it with some uncertainty at QB with two different QBs playing for OSU during the year.

You might have heard of this guy.  And, unless you are Rishi, you think he's a good running back.  I don't think I really need to run down his numbers.

Oh My science, did this guy kill us or what?  He's huge!  He is a beast out there.  I saw him destroying other teams, too.  He is a big reason why Mike Thomas' numbers were down a bit this year.  He catches all these things underneath and then just bowls people over.  Worst part?  He's listed as a sophmore.  Ai!  Keep an eye on this TE next year.

Inevitably, a fullbacks truest value stems not from his own personal stats, but from team stats.  So, I c+ped the USC team rushing stats.  Very, very impressive stuff.  Almost 200 yards per game.  5 yards a carry.  They have a stable of seemingly interchangeable RBs like Johnson, McKnight, and Cable.  Their ostensibly interchangeability stems partially from the USC O-Line, but also from Havili's great work as a fullback.  He also is listed as a sophmore, so look for him to continue harrassing us well into the future.

I'm having trouble formatting the stats from GoDucks.com, which, as you might remember, nearly crashed the blog the last time.  So, check out the numbers here.
But this guy was a great DE out there.  20 TFLs.  13 sacks.  Almost 200 yards in tackles of various players for losses.

Again, problems with the D table.  No idea why the D tables always give such problems.  Check it here.  Similar numbers to Reed.  21 TFLs.  12 sacks.  Almost 200 yards of lost yardage.  4 forced fumbles, too and 3rd on OSU in tackles.  Thankfully, he is a senior.

Remember, OSU had to replace its entire front 7 on the defensive side.  Paea stepped in quite ably.  He was a load up front to take double teams and help players like Slade Norris rack up sacks.
This is interesting from his bio:

I never realized there was such a strong Polynesian culture at OSU.  Might it be from all of those California students they steal?  Stop stealing our Californian Polynesians!
Also, Micronesians.  Don't take our Micronesians!  I was at a Japanese restaurant in the South over my break.  It was one of those Benihana-esque places where the chefs prepare the food for you right in front of you.  And the chef, who was apparently from Micronesia, poured a bunch of white sauce out for us, while saying "White sauce for white people!"  I protested, saying I was not white, but, in fact, Jewish.  Totes diff, yknow!
He said he was Jewish, too!  Which was awesome, I'd never met a Micronesian Jew before.  But I wasn't sure if he was being totes honest with me.  Especially when he asked how to say Happy New Year in "Jewish."  Oh well, even if he wasn't the first Micronesian Jew I met, at least he was the first Micronesian!

One of the few bright spots for a rough UCLA team this year.  As somebody once put it, "Guns don't kill people, Brian Price kills people."
D Numbers here.  14 TFLs and 4.5 sacks on the year.  Again, a massive load up front to occupy guys and let the other D players disrupt the backfield.  Price, unfortunately, is a sophmore.  We got a LOT more of this guy in our future.  Le sigh!

D Numbers here.  Led USC in tackles with 79.  A hard-hitting beast in the middle.  And Erin Andrews now knows the wrath of Cinco Ocho:
Nobody is safe from this menace! 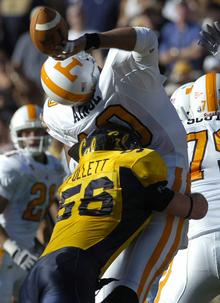 NAILED IT! (literally) via media.knoxnews.com

Numbers here.  Second on the Trojans in tackles.  10 TFLs, which is impressive for a linebacker.  God, there are so many Trojans on the D side here.  I guess given their defensive dominance this year, that is not too surprising.

DB
1st - SydGOD
Not much new here.  He's a God!  Check out this hilarious thread from some Spartans about cal bear look-a-likes.  They think SydGOD looks like Venus Williams.

See the USC D Numbers from above.  3 interceptions, 6 pass break ups and 2 forced fumbles on the year.  Another brutal hitter on the team.  I swear to God that if USC played Florida, Tebow would give up football to focus solely on circumsizing Southeast Asian boys.  That sounds a lot dirtier than it really is.  All I'm saying is that there is a good chance Tim Tebow has met more Micronesian Jews than I have.
And I've apparently met one.

Is this guy going pro?  Please, I beg of him.  I know there is probably 4 guys behind him on the team that are going to be just as good as him.  But I swear to everything holy, that this guy is a monster out there.  More fearsome than Cinco Ocho, IMHO.  Go pro!  GO PRO!
S
1st -
TJ Ward

Similar problems bringing the information over from GoDucks.com as with Nick Reed.  So, check out the numbers here.  101 tackles including 60+ solo tackles.  Both numbers leading Oregon.  A true hard hitter out there.  4 forced fumbles!  There was a lot of hype about the Oregon defensive backfield heading into this year.  In many ways, they didn't live up to that hype.  But Ward was not a problem here.  At least not for Oregon!

Also, hes from the Yoc and went to De La Salle.  Another Yay recruit stolen by Belloti and Co!
P

Dude averaged 45 yards a punt, 2 more yards a punt than our boy, Anger.  He's a senior, though.  I'm sure Anger will dominate from now on, but gotta give it up to Perez here.
K

The 2007 Lou Groza Award Winner was back at it again, kicking for ASU.  Although numbers were down due to a rapid decrease in the ASU offense, Weber still was kicking well.  76% success rating on the year, including going 4/5 in nearly knocking off OSU.

Thomas was not only a great WR, but a great PR, too.  He returned punts for almost 400 yards, including 2 touchdowns.

For cereal.  This kid is good.  Almost Jacquiz Rodgers good! 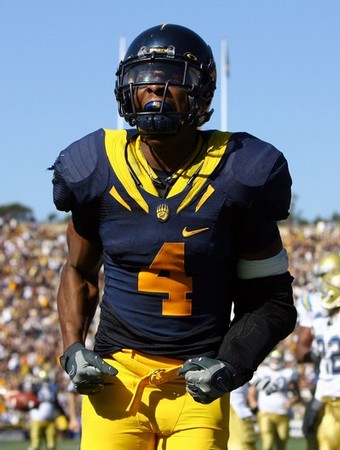 So, there you go.  Our most prestigious CGB All-Pac10 Team.  You don't get more prestigious than this.  It makes the NBC Page Program looks like Arizona State.  But I'm sure you, dear reader, in your perfect imperfection feel that we might have an innacuracy here.  A slight one, I'm sure.  But still, if there were to be a slight innacuracy, what might it be?  What would your All Pac10 Team look?