Cal led for a total of 27 seconds in a 55 minute game.  Put another way, Cal was either tied or behind for the other 3,273 seconds, or 99.2% of the game.  Teams generally do not win when they lead for less than 1% of the game, but even if they did, Saturday night's triple overtime thriller would stand out.  If you missed the game, stop reading now and click here.  I was going to suggest, to those football fans hesitant to sit through a three hour basketball broadcast, starting your replay with only four minutes to go in the second half, but then you would miss the 11-0 Washington run which gave the Huskies a seemingly insurmountable lead.  Rewind to there and you'll miss Patrick Christopher single-handedly carrying Cal to a tie immediately preceding the Husky surge, and if you skip the first half you won't get a sense of how poorly Cal was playing and how fortunate they were to even be in the game.  So suck it up, start from the beginning, and watch one of the most incredible Cal games, in any sport, from the last decade. 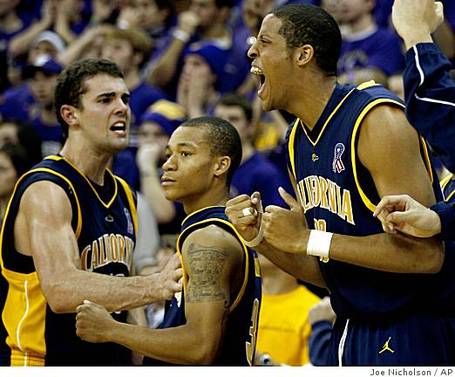 After last weekend's home sweep against the Arizona schools, Cal really only needed a split in Washington to keep its ever more likely (and only two months ago, highly improbable) tournament hopes alive.  The win at WSU on Thursday made Saturday's game at UW almost akin to playing with house money - a win is great, but a loss still leaves you in the black (or red, whichever one is good).  I kept reminding myself of this before the game, in an effort to stem disappointment from a possible loss.

It’s tough to win on the road in the Pac-10, and Washington in particular presents a difficult match-up for Cal – they have quick guards which can neutralize Randle, a long, athletic wing in Quincy Pondexter to defend Christopher, and a bulky, experienced Jon Brockman to exploit our thin front-court.  The huskies lead the nation in rebounding margin (something like +12 per game), and when you’re countering with reed-thin Jordan Wilkes, you’re probably in for a long night.  From the start, the game played out almost exactly as expected.  Randle was completely out of sync offensively and a liability defensively, as 5’8 and equally quick freshman Isaiah Thomas (no relation) beat Randle on the dribble and kept him from wreaking his usual havoc in the lane.  Boykin wasn’t able to get any room against Brockman in the paint, so he started throwing up bricks from 15 feet and picked up a couple of quick fouls to boot.  Only Christopher showed any moxie, and as a team Cal was getting thoroughly outplayed.  At the end of the first half, Cal was being outscored by 20 or so in the paint and only a pair of late threes from Christopher and DJ Seeley kept the game close. 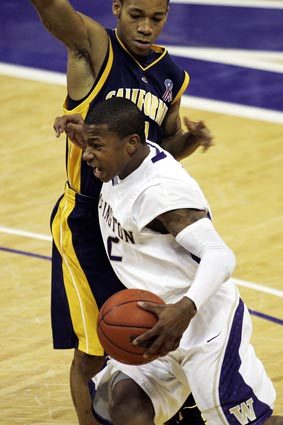 He can't dominate every game.

Christopher continued to carry the bears in the second half, with Harper Kamp chipping in some decent defense and a few rebounds, and at 13:37, Christopher tied the game at 41 with a pair of free throws.  The huskies responded with an 11-0 run and held a 9 point lead with less than 4 minutes to go.  Washington would make only a single free throw (in four chances) from then on, providing Cal a tiny window of opportunity.

Cal took advantage.  Theo hit a three from the corner to cut the deficit to 5, Christopher made it a single possession game with a lay-in, and with less than a minute to go, Randle, having a miserable game and still without a three point bucket in nine attempts in the state of Washington, calmly pump faked, got his man in the air, stepped aside, and hit nothing but net on the tying three.  After Cal rebounded Washington’s final possession in regulation, a rejuvenated Randle broke down the husky defense and fed Robertson in the lane, but the shot bounced off the front and back irons as time expired.  With Cal’s only lead of the game coming at 1-0, I felt pretty good about simply getting to overtime.

Like they were for the vast majority of the game, Washington was the better team in all three overtimes, holding leads of three in the first, five in the second, and four in the third.  And yet, every time that Washington threatened to put the game away, Cal had an answer, determined to steal a game they had little business winning.  Starting with Randle’s three-pointer at the end of regulation, Cal tied the Huskies seven times before finally taking the lead on Theo’s and-one free throw with 15 seconds to go in the third overtime. 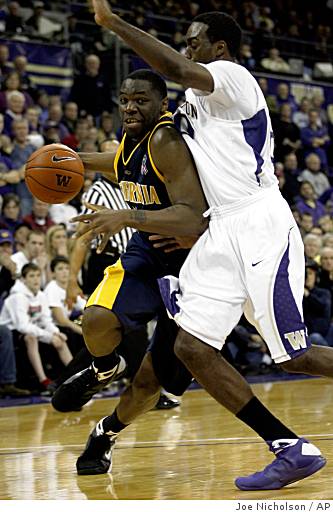 There were so many huge plays along the way that it’s difficult to single out one.  Randle’s three pointer to send the game into the first overtime was incredible, given his struggles over the last two games.  Christopher hit an off-balance three coming of a curl at the top of the key to tie the score in the first overtime, and Theo hit the tying shot and subsequent free throw with only 15 seconds to go in the third OT to give Cal the lead.  After Randle, who came alive late in the second half and finished with 23 points, fouled out at the beginning of the third overtime, the Huskies staked a four point lead and seemed to finally have Cal on the ropes, but true freshman and CGB favorite Jorge Guiterrez calmly hit a tough lefty lay-in high off the glass and then fed Theo for the tying bucket.

Still, these were moments of only moderate desperation.  The real magic came at the end of the second overtime, as Cal trailed by five with only thirty seconds left.  Washington’s Justin Dentmon hit thirteen of his sixteen free throws for the game, including seven in a row in the second overtime, but missed two of four in the last twenty seconds.  He made only one with nine seconds left, giving Cal a chance to tie the game with a three-pointer.

Patrick Christopher took the shot to tie.  Without him, Cal would have lost by double digits in regulation.  He had 20 of the bears' first 41 points, and finished with a team high 11 rebounds.  He played 53 of the 55 minutes, including the final 4 minutes of regulation and all three overtimes with 4 fouls.  His 27 points were a career high, but perhaps his best game as a bear wasn't good enough.  The huskies, the better team for most the game, had beaten him, as his tying three pointer missed badly with only one second left.

Enter DJ Seeley.  Seeley has played only 116 minutes in his college career, as he has watched the much less heralded freshman Jorge Guiterrez take most of the minutes backing up Christopher and Randle.  His season high was 6 points against Dartmouth, and he has 13 rebounds through 17 games.  With the game 1 second from completion, all he did was swoop in for the rebound, lay the ball in while being grabbed, and calmly sink the tying free throw.  He is now 6 of 11 from the free throw line this year.

That Seeley had the wherewithal to get into position for the rebound and the concentration to lay it in while being fouled is remarkable.  But even that seems ordinary compared to taking a breath, stepping up to the line, and drilling the tying free throw with 1 second left in double overtime.  This is a guy who was 5 of 10 from the line before that shot, and with fans going crazy and the game in the balance, he hit nothing but net.

This team is now 15-2, 4-0 in the Pac-10.  They have proven can beat top teams in the league.  They have shown they can win on the road, including a victory over what appears to be a good Washington team.  They have demonstrated they can win when their point guard struggles and their three pointers aren't falling (only 36% on Saturday against UW and 35% on Thursday against WSU).  But even more than that, they have exhibited the guts and heart necessary to compliment their preperation, intelligence, and execution.  On a night where both Theo Robertson and Jerome Randle missed the front ends of 1-and-1s, a little used freshman stepped to the line in the second overtime and buried the tying free throw with 1 second left.  You could call it luck, but you'd be wrong.