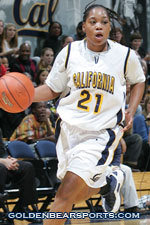 There was the excitement of yesterday's game wherein Cal defeated UW in 3OT.  Now, Cal and UW face off again!  This time Coach Boyle and the Women's Basketball team take on Washington.  In Berkeley.  The game is being televised on FSN.  Use this thread as an open thread to discuss all the action and anything else on your mind.

Here is the info:

And here is the official Cal preview.

For the second straight season, the California Golden Bears have started the season with a 3-0 mark in Pac-10 play. The Bears earned a 56-46 victory at Arizona Jan. 2, followed by a 54-53 thriller at Arizona State Jan. 4 and then added a 68-45 victory over Washington State to put them atop the conference standings. Since joining the Pac-10, the Bears have only started 3-0 or better two times- last season when they won six straight to begin conference play and in 1991-92 when they began with a 4-0 record. Overall, the Bears have started conference play 3-0 or better eight times, with their best start coming in 1981-82 when they went 8-0 to begin their NorCal Conference play. It is also the first time that both the men's and women's basketball teams have started Pac-10 play with identical 3-0 marks.

The Bears improved to 3-0 with their 68-45 victory over the Washington State Cougars. It was the sixth time this season, and the second time already in Pac-10 play, that the Bears have held their opponent to under 50 points in a game. The Bears also allowed just one three-point basket in the game, with WSU going 1-for-19 from long range. Their 5.3 percent three-point efficiency was the lowest by a Cal opponent this season. In the season opener, Cal allowed Albany just two makes on 15 attempts, holding them to 13.3 shooting from long range.

Sunday's opponent, the Washington Huskies, stunned the Bears last season with a 74-66 victory in Seattle to close out the 2007-08 regular season. The defeat dropped the Bears from a possible tie for first place in the Pac-10 to their second place finish. Washington comes into this Sunday's game coming a record-setting 77-point loss to Stanford, the largest point differential ever in a women's Pac-10 basketball game.