The Cal Bears basketball team took two leads Saturday afternoon vs. the Washington Huskies:  1-0 at the beginning of the game, and 86-85 with 15 seconds left in the third overtime.  What happened in between those two leads was the stuff of legends. 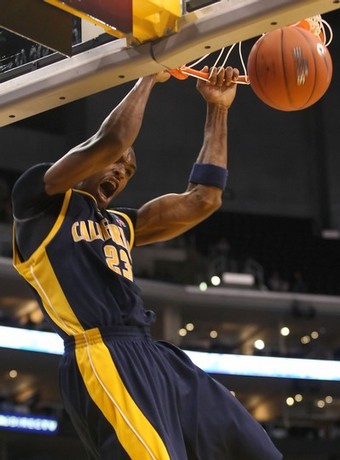 Patrick Christopher led all scorers with 27 points vs. the Huskies.  -  Image via cache.daylife.com

The Bears didn't play their best today, but on the road in a tough environment, they did just enough.  And I mean *just*.  They trailed by 10 with 5 to go in the first half, only to fight it back to 5 at the intermission and tie the game at 39 early in the second.  Then they fell behind by 10 again, this time with just 7 minutes to go, still trailed by 8 with 3 to go, and somehow managed to tie the game on some big threes from Robertson and Randle.  They trailed by 3 in the first overtime, but came back.  They trailed by 5 in the second overtime with just 30 seconds left, and somehow came back again.  Down by three with just 5 seconds left, Patrick Christopher's desperation 3 missed badly, but guard D.J. Seeley, who hasn't seen a whole lot of action yet this year, was johnny-on-the-spot with the rebound, laying the ball in and drawing the foul.  The true freshman sank the free throw to send the game to another overtime.

And the third overtime?  Same story.  Bears fall behind, twice by two, but continue battling.  Finally, finally, Theo ties the game at 85 with just 15 seconds left, gets fouled, and nails the free throw to give the Bears a one-point margin.  Christopher would tack on a couple free throws to give the Bears a final margin of 88-85.

CBKWit will have a more thorough recap tomorrow, but I'll quickly gush over a couple key points:

• The Bears didn't shoot particuarly well today, and the Huskies' defense kept them out of sorts for much of the game.  Jerome Randle, in particular, seemed frustrated and lost for much of the game as Washington guard Isaiah Thomas seemed to have his number.

• I was pleased, for the most part, with the Bears' defensive effort, however.  Jon Brockman is a load, and the Bears weren't expecting to shut him down (16 points, 18 rebounds), but I thought they did a good job limiting him.  When in doubt, put Brockman on the line, where he was just 2-8 on the day, including some key misses in overtime.

• Most impressively, the Bears outrebounded the larger Huskies 42-39.  FYI, coming into the game, UW led the nation in rebounding margin at around 12 per game.  For the smaller Bears to beat them at their own game is simply phenomenal, and was key to their defensive effort.

• There was a long stretch of this game where Patrick Christopher was single-handedly keeping the Bears close.  27 points is a career high, and with Randle shut down for much of the contest, Cal needed every one.

• I really liked Harper Kamp's effort vs. Brockman.  He kept his positioning and refused to get pushed around, forcing some awkward shots and grabbing 5 key boards.

• With Randle struggling, Jorge Gutierrez took up the load of ball-handling duties and acquited himself pretty well.  I know I was worried when Randle finally fouled out to open the second overtime, but the freshmen backcourt of Gutierrez and Seeley proved more than up for the challenge.

• Anyone else think it was interesting that, with the game going to multiple overtimes, Kamp eventually fouling out, and pretty much every player obviously gassed, Montgomery never called on Jordan Wilkes?  Wilkes played early on, but barely dented the scoreboard and sat throughout the extra periods.  Nikola Knezevich could have spelled a couple starters as well, but instead sat, for the most part, unused.

Epic, epic game tonight.  And guess what?  The Bears are now 15-2, 4-0 in the Pac-10, currently sitting in first place in the conference, riding a 9-game winning streak, and come Monday, they should have their first national ranking in quite a long time.  Thank you, Mike Montgomery, for giving us Cal fans a reason to care again.  Thank you.