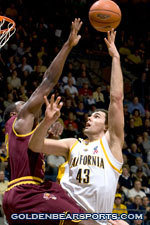 Coming off of the big victory against the Cougs, Cal takes on the Huskies today.  Game is today at 3 PM.  It does not appear to be televised, so check for it on the Cal radio network.  Perhaps BearsNecessity will be kind enough to post some streaming links in here.  Streaming link:  http://www.justin.tv/probono

<Edit by ragnarok:  The game will apparently be televised at least to parts of the Bay Area.  Comcast Channel 400 appears to have it, and I'm told channel 415 will have it as well.  For DirectTV subscribers, they should have it on channel 698.>

Here is the preview from the official Cal site:

Riding an eight-game winning streak, the longest since 2003, California (14-2, 3-0) heads across the state to face Washington on Saturday, Jan. 10, at 3 p.m. The Golden Bears, currently No. 27 in the AP poll, improved to 3-0 in the Pac-10 with a victory over Washington State on Thursday. The last time that the Bears opened up Pac-10 play at 3-0 was in the 2002-03 campaign when Cal won its first seven conference games.

Patrick Christopher has started off the Pac-10 portion of the season on fire, posting three consecutive 20-point performances and led the Bears in scoring in two of them. He tallied 22 points in Cal's victory over Washington State last Thursday. Christopher is currently averaging 15.4 ppg, which is second best among the Bears. He is also tied for third on the team in rebounds with 57, averaging 3.6 per game.

Jamal Boykin was another huge factor in the Bears' victory over the Cougars. Boykin posted his third career double-double, second of this season, collecting a career-high 14 rebounds and 12 points. Boykin has been Cal's leading rebounder all season, currently averaging 6.1 per game.

On defense, the Bears are holding opponents to 63.2 ppg, far fewer than the 75.1 ppg Cal allowed last year. The Bears have held six opponents to shooting less than 40.0 percent this season, and San Francisco was the only team that was able to shoot 50.0 on them.