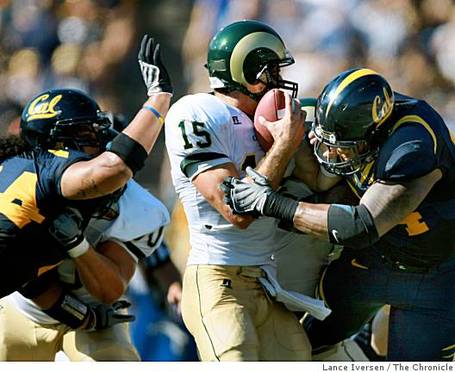 OK, I just got back to a computer. I think I am the one designated to do some post game thoughts to help spur conversation. These are all based on my observations from the game without looking at any stats:

1. Although there was quite a blowout today, the Riley led portion of the offense didn't exactly light things up. Scored 1 touchdown on a strike to Nyan in the 2nd quarter. Sometimes it wasn't exactly Riley's fault. For example, he put the ball right in Sean Young's wheelhouse on that long bomb, but Young dropped it (or was being tackled at the same time, I had trouble seeing exactly).

But Riley also had some rough throws out there. People were very quick to jump on the Jesus In Cleats II: Cleat Harder bandwagon last year, but Riley is still a young QB. He shows flashes of brilliance, but also has had some growing pains.

Given the health of Best (???), we'll need him to step it up next week against ASU.

2. Best was taken down and stayed down. It was a nerve wracking time, but then he walked off the field. I figured all was fine, but now I read he had a dislocated elbow? MRI tomorrow? Is that accurate? I don't know what a dislocated elbow can do exactly to keep a player off the field. Doesn't sound good. Let's pray for health. When healthy, he looked really good out there. Had an unfortunate fumble, though.

Our offense was moving the ball at times, mostly on the strength of Vereen and Best, but then had rough fumbles. Including one right at the goal line. Oh well.

3. Was the blocked punt blocked by a CSU player? It seemed like it to me, but other people thought one of our players actually blocked it. I think it bounced off of the back of a CSU blocker, though. 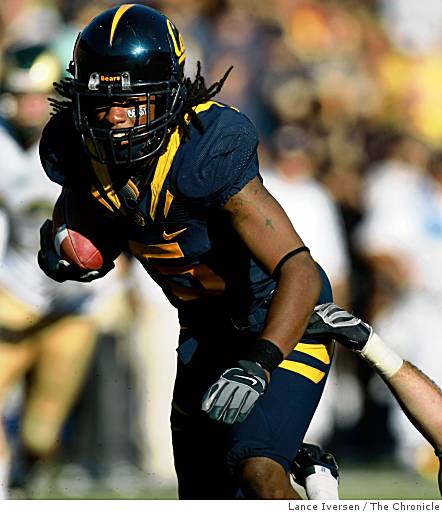 The Chronicle currently lists this player as Jahvid Best.

4. Longshore looked pretty good out there. Made some strikes. Had some mobility on bootleg throws. I don't think that anybody thinks he should start over Riley, but I am happy he is playing well out there (Ed Note: Apparently, in the post game news conference Tedford said that the competition was back open, so at least Tedford thinks Longshore could start over Riley.). We need look no further than Oregon to see a situation where QB depth is paramount. I know there are many negative feelings left from 2007, but he is a player on the team and we always want them to do well.

5. When we were doing pre-season analysis, the general overview was "Hopefully D can keep us in games while the O works to gel." The D is DEFINITELY doing its job. SydGOD was a GOD today not only on D, but also special teams. He had a special teams punt return TD and made many great plays at DB. Our entire defensive backfield was stellar today. We had some trouble getting pressure at times, especially earlier in the game. But that might have more to do with the scheme, who knows?

6. Did we have a kick off that stayed in bounds? Awkward.

7. I'll write more about this later, but the new MicChick might actually cause a revolt by the student section. How interesting.

Ok, so there are some early thoughts that should hopefully spur discussion. I haven't looked at any stats or read any reviews of the game. We will, of course, have a lot more about this. I'll have voluminous amounts of photos. Hydro, Ragnarok, and CBKWit will put some more analysis in. And hopefully Best's arm will be A-OK! GO BEARS!

Since it is unclear whether any CGB Marshawnthusiast will be at a computer for the game today, we've decided to put up all these threads ahead of time. Pregame Thread. First Kwarter. Second Kwarter. Third Kwarter. Fourth Kwarter.

Did we win? Did we lose? Forfeit for smoking tobacco during gameplay? Use this one to discuss your immediate post-game reaction. We'll try to put up our thoughts on the game as soon as we get back near a computer!

If you missed anything this week, don't forget to check out our discussion of interesting rules, including Ragnarok's favs. We also discussed the national football rankings and the Pac10 football rankings. And regarding today's opponent, CSU, we had a Q+A with another blog, looked at some game film, and took a shallow look at their O and D.