Four and a half years earlier, she was midway through her ninth year as an assistant women’s basketball coach at Duke University, where she’d played in the 1980s, when on November 28, 2001, after jogging on the Durham campus, she was felled by a brain hemorrhage. She spent 13 days in Duke University Hospital— many of them in intensive care—as friends and family held vigil. Her life flickered and her fate seemed up for grabs. An abnormal cluster of blood vessels was spotted in her brain. Surgeons removed the bunched vessels and gave her body a chance to right itself. Joanne Boyle did her part. She had to learn to walk again, to feed herself, to speak. She exercised with excruciating repetition to regain her motor skills. And by late winter 2002, she rejoined the Blue Devils and helped coach them to the NCAA Final Four.

The article continues on with some more information about her personal life:

Joanne Boyle grew up in a suburb of Pittsburgh, Pennsylvania, the second-oldest of five siblings. She was a tomboy, she remembers, and as a teenager she was tall, gangly, and wasn’t asked to dance. In fact, she didn’t even go to the proms. "My parents were strict," she recalls. "If I wanted to go out, I’d tell my parents I was babysitting."

She also developed an independent streak. Raised Catholic, she sought more latitude and later became a nondenominational Christian. She didn’t even want to attend Duke, partly because her parents had wanted her to. But she changed her mind once she experienced the Durham campus and was invited to join the basketball team.

Boyle received her bachelor’s degree in economics in 1985 and went on to earn a master’s in health policy and administration from the University of North Carolina. While she initially wanted to join the Peace Corps, Boyle instead played basketball in Europe for three years, playing and coaching in Luxembourg and Germany.

She clearly is a very intelligent woman, who before coming to Cal had already achieve quite a bit in life.  But since then, she's accomplished so much more!  Per her bio:

Boyle enters 2008-09 with a 68-28 record in three years in Berkeley, giving her the best winning percentage (.708) of any of the eight women's basketball coaches in school history and a six-year career record of 135-57 (.703). A member of the State Farm/Wade Trophy selection committee, Boyle became the third individual in school history to be honored as Pac-10 Coach of the Year in 2006-07. She has registered more wins in her first three seasons at Cal than the Bears tallied in the six seasons (63) prior to her arrival.

Last season, Cal was ranked in the top 10 for 13 straight weeks in the Associated Press poll and 12 consecutive weeks in the USA Today¬-ESPN coaches' poll, including rising to an all-time program-best ranking of No. 8 in both polls. The Bears were tabbed No. 13 (AP) and No. 14 (coaches) in the preseason polls.

Since Boyle's arrival on the West Coast, Cal has emerged as one of the Pac-10's statistical leaders. In 2007-08, Cal ranked among the top-five teams in 13 categories for the second straight season and was No. 1 in four areas. For the third consecutive year, Cal established school records for field goal percentage defense (35.1%, 1st Pac-10) and scoring defense (54.3 ppg, all-time Pac-10 record). Cal's 155 three-pointers made in 2007-08 broke the previous school record of 135, established in 1995-96.

So, that's the coach.  A well-regarded person who has accomplished a lot so far with Cal and looks to do well going forward.  Let's take a look at the team.  We'll look at some in this part and then finish up the rest in part III.

Hampton, a two-time All-American and three-time All-Pac-10 honoree, looks to lead Cal to even greater heights during her senior year...2008-09 State Farm Wade Trophy candidate...has matured a lot as a player mentally...incredibly skilled, physical post player...performs equally well from both sides of the block and is just as dominant facing the basket...has worked on extending her range to during the off-season...shoots equally well with her left or right hand...excellent rebounder...will leave Cal with her name planted in the school's record books...in Cal career history, tied for fifth in scoring average (15.3 ppg) and in free throws attempted (501), ninth in points (1,301), blocks (63), field goals made (514) and field goals attempted (1,080), and 10th in free throws made (268)...owns 25 career double-doubles...one of 12 players named to the 2006 USA under-20 women's national team.

Hampton has been slowed this year by a knee injury.  However, that hasn't diminished people's perceptions and expectations of her.  She has been placed (along with Ashley Walker) on the short list for two prestigious basketball awards.  The first is the Wooden Award.

The John R. Wooden Award is an award given annually to the most outstanding men's and women's college basketball players. The national award program consists of men's and women's Player of the Year awards as well as naming an All-American team.

The other award is the Wade Trophy.  Hampton (again, along with Ashley Walker) has been named to the shortlist for this award.

California senior posts Ashley Walker and Devanei Hampton have been selected to the 2008-09 preseason "Wade Watch" list for the State Farm Wade Trophy Division I Player of the Year award Tuesday. The 25-member list is made up of top Division I student-athletes who best embody the spirit of Lily Margaret Wade according to the following criteria: game and season statistics, leadership, character, effect on their team and overall playing ability.

As a junior, Hampton was chosen a State Farm/WBCA Region 8 All-American for the second consecutive year and received her second honorable mention coaches' All-America accolade.

Hampton is the only three-time first-team All-Pac-10 choice in school history and a two-time honorable mention Associated Press All-American. In 2007-08, she was second on the Bears in scoring (13.5 ppg) and rebounding (8.0 rpg). In Pac-10 games, the 6-3 Oakland, Calif., native was fourth in the conference in scoring (14.3 ppg) and tied for second in rebounding (8.4 rpg). Hampton has 25 career double-doubles after registering eight last season. She is ninth all-time in scoring in school history with 1,301 points. 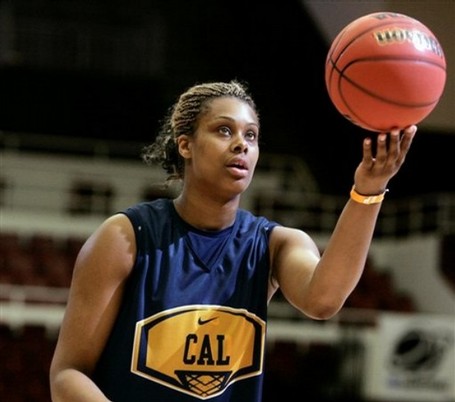 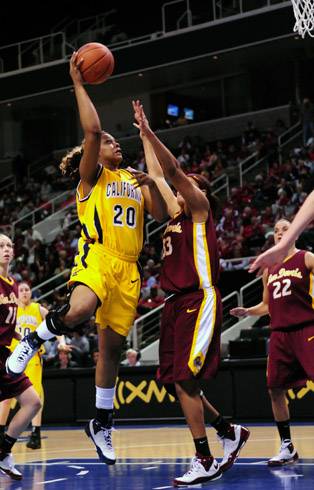 So, that's Hampton.  Hopefully, she can put her injury behind her and become the player many believe her to be.

Now, you've heard a lot so far about Ashley Walker, too.  So, let's take a look at her.

From those two articles above regarding the Wooden Award and Wade Award, respectively:

Walker, a two-time All-American and two-time first-team All-Pac-10 selection, was named a 2008-09 preseason first team All-American by the Sporting News.

ESPN has also named Walker the top power forward in all of women's basketball (with Alexis Grey-Lawson and Hampton getting some love, too).

BERKELEY - ESPN.com, in a list of the top five women's basketball players at each position, declared California Golden Bear senior Ashley Walker to be the best power forward in the nation. The list was voted on by a panel of ESPN.com contributors. "She [Ashley Walker] plays with the aggressive mentality of thinking she has something to prove," wrote Mechelle Voepel in her explanation of what makes Walker the nation's best power forward. "She has been the steady presence as Cal has risen in the national rankings."

She was also named a unanimous preseason all-Pac10 player.

Members of the Pac-10 Conference's media, as an extension of the preseason poll, voted a five-member preseason All-Pac-10 team. Senior forward Ashley Walker was a unanimous pick, receiving a vote on all 14 ballots. Fellow Bears' post Devanei Hampton was also among the five players named. 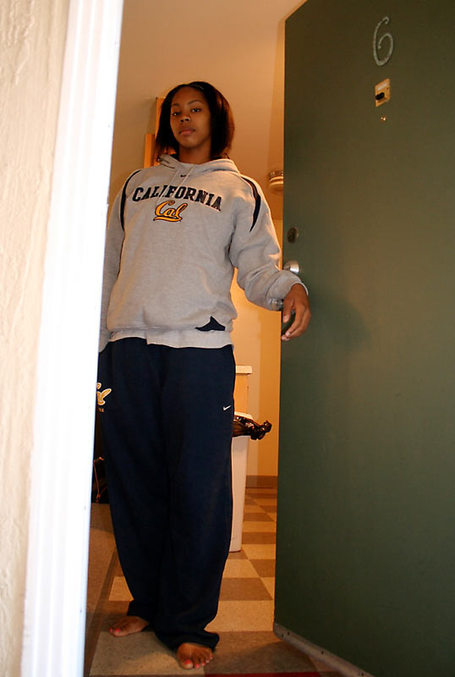 That is from Sports Illustrated, which did a whole Cribs thing on her, well, crib.  And here's her YouTube interview:

Up next, Alexis Grey Lawson.  She's another great Cal player.  She came in in that amazing recruiting class, but can actually stay for another extra year due to a redshirt medical year.

Gray-Lawson, a three-time Pac-10 postseason honors recipient, enters her fourth season at Cal...has the option of utilizing a fifth-year of eligibility in 2009-10 due to an ACL injury as a sophomore...an iron woman on the court...physical, athletic combination guard...shows unbelievable ballhandling ability and takes excellent care of the ball...possesses a great shooting touch and excels at driving the basket...her strength allows her to post up other guards...good rebounding guard and defender...led Cal in both games against the Tunisia national team (20 points and then 30 points) on the Bears' Africa tour...led the 2008 San Francisco Pro Am summer league in scoring at 28.3 ppg...begins the 2008-09 season 75 points from becoming the 20th Cal player to reach the 1,000-point plateau...in her Cal career from the three-point line, ranks fifth in percentage (38.4%), tied for sixth in makes (104) and ninth in attempts (271)...the school record of 159 three-pointers made by Jennifer Self (1989-92) is within her reach...finalist for a spot on the 2006 USA under-20 national team...had to withdraw from USA Basketball consideration due to a knee injury.

Here is an article on her knee injury and how it changed her life.

Not being able to play much of last season, she started something called the "Dream Program" to help give advice to youngsters in her hometown. And she drew inspiration from her brother, Kameron Gray, who also dealt with a knee injury last season but went on to be MVP of the NAIA Division I Tournament for winner Oklahoma City University.

Coach Joanne Boyle watched Gray-Lawson fight the uncertainty demon in her head early on this season, knowing there was only so much she could say. Gray-Lawson had to win that battle herself. Boyle knew she would. "When we were at Baylor [Nov. 25], she missed four or five layups," Boyle said of 7-1 Cal's only loss thus far. "You can tell a kid to let it go, but it has to happen in the framework of what they are dealing with. She has to find her way there. But I wanted her to know, 'You've got it, don't question yourself.' "After she got hurt, every day it was like she was just getting it done. She always came into rehab with a smile and didn't go through the emotional roller-coaster that a lot of kids do. But now she has to get her game all the way back. And this was the first game where I saw in her face: 'Give me the ball. I've been here, I can do this.'"

But even with some injury problems in the past, Grey Lawson has had no problems this year.  Against Rutgers, she lead the team with 25 points and 9 rebounds. 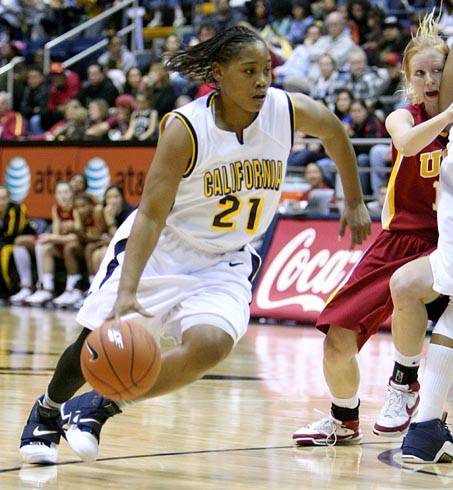 Sneed is one of four seniors on this year's Cal team...came to Cal as a power forward and has developed her skills as a small forward since joining the program...the first of Cal's No. 7-nationally ranked recruiting class to verbally commit to the Bears before the summer of 2004...shows a nice touch from 15-17 feet...outstanding defender and rebounder...played well on Cal's Africa trip, posting eight points and nine rebounds in the first game against the Tunisia national team and adding a team-high 11 rebounds in the second game against Tunisia...averaged 13.8 ppg in the 2008 San Francisco Pro Am summer league.

My Google-Fu is failing me here, but I have found evidence that she is vaguely fluent in French.  From her blog on the team trip to Africa this year:

I had forgotten how much of a hassle international flights can be. I must have pulled out my passport 50 times. The lines were so long and people were speaking French all around me. I didn't mind at all because I could understand them and occasionally speak it with them. 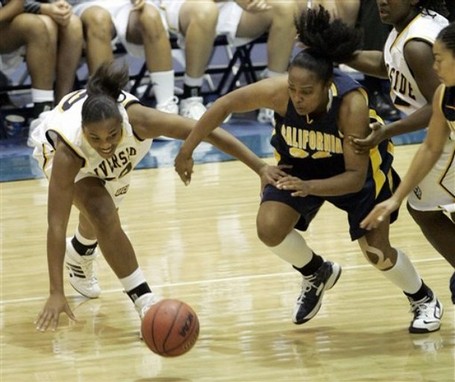 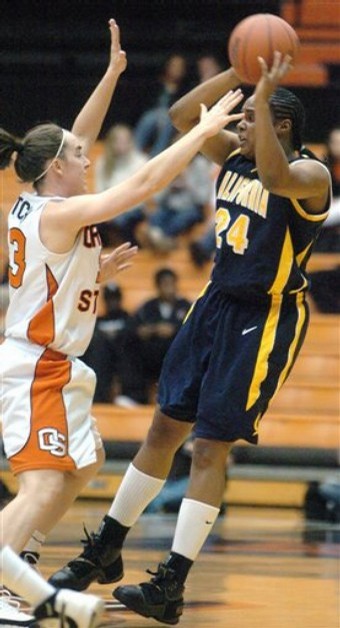 So, that's a goodly amount.  In the final installment, we'll look at some more key players to the Golden Bears this year and see how they've done so far.  This just in, it's good!  Go Bears!