Not too much to say about this one.  The 2008 Washington State Cougars gave up 58 points or more six times in their thirteen games...and still managed to beat the Huskies.  This Husky team, in other words, is really, really bad.  In fact, a lot of the Pac-10 is really bad this year.  Cal finished the year 6-3 in conference which was only good for 4th place; that's because the bottom four teams (UW, WSU, UCLA, and ASU) were a combined 0-16 against the top 4 teams (the next two teams, Arizona and Stanford, are only 2-6 against the top, so the bottom 6 teams have only 2 wins in 24 games against the top 4).  Aside from USC, none of the other top 4 teams (OSU, Oregon, and Cal) are particularly great; the bottom of the conference is just that bad.  I had only seen the Huskies against UCLA and in the last 5 minutes of the Apple Cup, so while they looked bad, they weren't awful in comparison because they were playing teams almost equally hapless.  I went into today's game with a sort of morbid curiosity, like someone investigating a car crash, wondering what the Huskies would look like against a decent team. 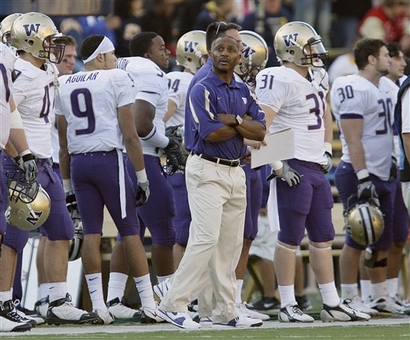 The result was four first half turnovers by the Huskies and 311 rushing yards (yes, that is a three, you are reading this correctly) by Jahvid Best.  The betting line started at Cal -33, which seemed, um, high.  I couldn't believe when the line actually went up during the week, ending at -35 or -36.  Cal won the game by 41.  How do you beat a 36 point spread?  Grab four turnovers and take a 31-0 lead at half.

Although I was skeptical, as always, of Cal dominating and blowing out the opposition, this game was pretty predictable.  UW finally had their one victory of the year last week against WSU, only to see it slip away in the last minute of regulation.  You might have thought they would come out with some fire in the hopes of avoiding a winless season, but it seemed from the outset they knew they didn't have a chance.  Cal had a little more to play for, and the defense in particular seemed intent on emphatically cleansing the embarrassing performance in Seattle a year ago.  Jahvid Best is generally pretty spectacular, but his elite speed makes slower teams look really bad.  Turns out UW is a slower team, and in predictable fashion, Jahvid demolished them with a new school record for rushing yards and a 16.4! yards per carry average. 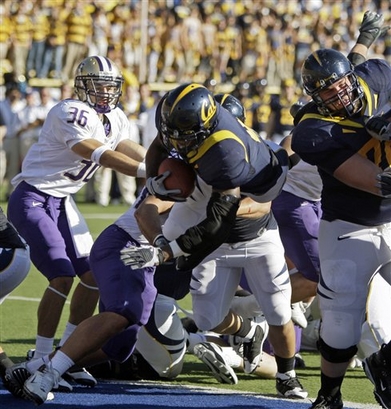 Best rushes for only 1 yard.

Even the crowd was predictably small and subdued, the result of an unusually early kickoff, an unusually balmy December day, and a 31-0 halftime lead.  After Best ran for his 4th TD of the game on a pretty 84 yard scamper with only a minute gone in the second half, giving Cal a 38-0 lead, most in the stands had trouble maintaining their focus for the rest of the game.  I certainly agree with the decision to move this game from October to today, given that Cal would have gone 9 weeks without a bye.  Still, this game showed why it's nice to end with the enthusiasm and drama of Big Game.  We won by 41, but I think most of us were a bit more excited by our 21 point victory two weeks ago. 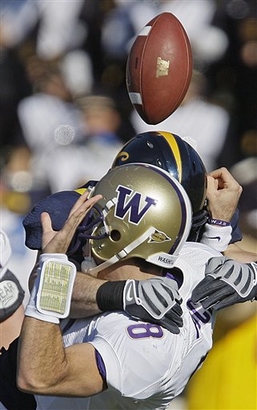 One advantage of playing such a feeble team in our last game was that ALL of our seniors had extensive playing time.  Nasty Nate threw a touchdown, with no 4th quarter interceptions, in his last game in Memorial.  Zach Smith got in at fullback, Sean Young returned a punt, Drew Glover and LaReylle Cunningham saw a lot of action at receiver, and Alex Stroud caught what I believe is his first catch of his career (judging from the sideline reaction, I'm pretty sure it was).

We also saw a number of our younger players get extensive time.  The Brock Mansion Yacht Party was in full glory, and after Mansion threw a pass 10 yards out of bounds, I received the following text from HydroTech: "U C that? better than Longshore'Boner as JUNIOR!!!!"  Ok, that might be an embellishment, but Twist and I were pretty sure that Hydro was excited.  Tracy Slocum had 36 yards on 6 carries, the most action for him since Washington State.  Ernest Owusu, a redshirt frosh DE who I raved about all spring, looked good pressuring the QB on a number of plays.  He hasn't played as much this year as I hoped, but that's probably due to the fact that we already have Alualu, Jordan, and Rulon coming off the edge.  If we can develop a good backup to Derrick Hill at NT (and Kendrick Payne was looking good before he went down for the year), next year's D Line might be Cal's best since Tedford arrived. 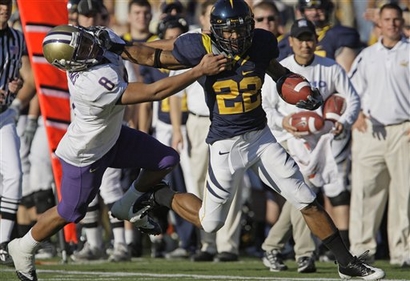 I was surprised to see #1 line up at receiver for a number of plays.  Unless someone switched jerseys, #1 is true freshman Marvin Jones, who I don't believe has played since Maryland after suffering a knee injury.  I thought that Cal was planning on redshirting Jones, given that he had missed most of the season due to injury, and I was pretty surprised to see Cal burn that redshirt in the final minutes of the regular season.  Anybody hear anything about this on the radio or tv broadcasts?

Although it was a pretty anticlimactic climax to the season, we can revel in the fact that Cal was a perfect 7-0 at home this year (while temporarily ignoring our 1-4 road record).  We can also revel in the knowledge that the Pac-10 rushing champion is a Golden Bear, and that he'll be playing in Memorial for at least one more season.  Congratulations to Jahvid Best and the injury depleted offensive line for one of the best rushing years in school history.  GO BEARS!