aka:  "Meeting Internet People In Real Life, and Then Shotgunning Cheap Beers With Them" 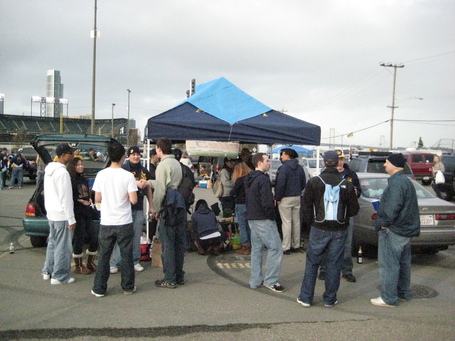 I'll admit, I was a little apprehensive when planning this tailgate.  I had no real idea if 5 people or 50 people would show up.  I couldn't know whether the weather would hold.  I had never tailgated at AT&T park before, and wasn't sure what it would be like.  My wife even got a ticket to the CAA event (where a number of my friends would be), and I had fears of the event being me and 4 other dudes drinking beer under a tent in the rain for 4 hours.  Would people show up?  Would they even be able to find the tailgate?  Would everyone bring chips, and no one bring dip (the Alanis Morissette definition of irony)?  I had no way of knowing.

Thankfully, people did show up.  Calfan and his friend Rishi (no, not that Rishi) found me almost as soon as I got out of the car, actually, and the TheNick pulled up next to me soon after.  Setup went pretty quickly, actually, as it basically consisted of unloading my car and putting up the EZ-Up tent (big, BIG shout-out to OskiWeeWee for hooking us up with the tent). 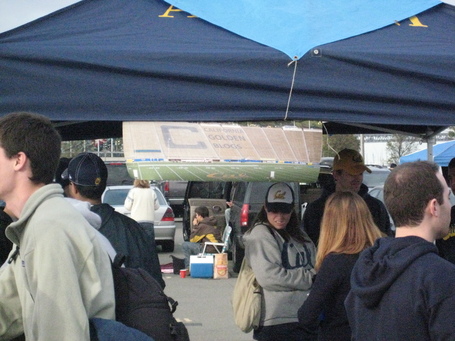 Maybe we'll get a bigger sign next time; hopefully, no one had too much trouble finding us.

After that, it was pretty much your standard tailgate, except that I was meeting pretty much everyone for the very first time.  People I see on the internet every day, but had no idea what they were like in person.  Turns out, Rishi (the real one) looks nothing like the guy in his avatar picture (though royrules22 does uncannily resemble Jughead, and HydroTech has been accurately described as 'an anthropomorphic "Script Cal" logo' in the past).  I gotta say, it was pretty cool meeting y'all.

I also really enjoyed meeting all the lurkers and semi-lurkers (those who have accounts but almost never comment) who stopped by.  We get lots of comments from a solid core of readers, but it's pretty cool knowing that more of you are out there, and I'm glad some of you felt welcome enough to stop by and say "hey". 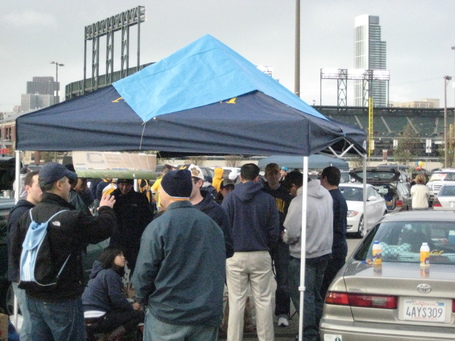 We had to put the tarp over the tent to cover the corporate logo printed on it.

Notables from the event:

Favorite Tailgate Contribution - I loved the dogs and the chips and dip, but I especially appreciate the inspired soul who brought by an entire box of See's candy.  ¡Muchas Gracias!

Strangest Tailgate Contribution - Diet Pomegranate 7-Up?  Really?  AndBears says it's actually pretty good, but I haven't had the inclination to try any yet (I've got most of a 2-litre bottle leftover in my garage).

Best Surprise - Meeting people that I only know from the internet, and having some of them turn out to be Real Live Girls!  Yes, it's true, there are real girls on the internet!!  Very cool.

Worst Surprise - Bringing my propane grill, but totally forgetting both propane and matches (the starter on the grill broke the first time I used it, but I guess that's what $40 a Target buys you).

Tailgate Savior - My friend Kevin, who coincidentally happened to by tailgating only 50 feet away.  Kevin came through in a big way with an extra propane tank and an extra lighter, saving us all from a meal of cold (but thankfully precooked) hot dogs and sausages.

Worst Moment - Standing in line for the Port-O-Potty behind a couple of girls having an extended conversation about their Uggs and how their $200+ jeans made their butts look.  This went on for, like, 10 minutes.  I wanted to stab myself in my eye with my beer bottle.

Best Moment - Watching Rishi and HolmoePhobe spill their cheap beer everywhere while shotgunning Silver Bullets.  I later joined in, but I just had to take pictures first. 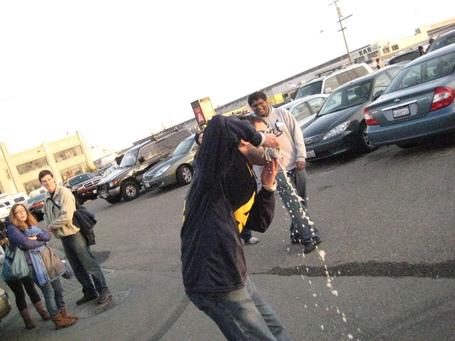 My favorite part of this picture is the faces of the onlookers in the background.

Final Tally Of Leftovers - I brought a cooler of about a dozen assorted quality beers that were in my fridge, including Newcastle, Sierra Nevada Celebration, Heineken, and Pyramid Hefeweizen.  I came home loaded up with 1 Newcastle, 1 Mirror Pond, 1 Red Tail, 5 Heineken Keg Cans, 6 Diet Cokes, a package of Hebrew National hot dogs, a box of Cheeze-Its Party Mix, unopened bags of Tortilla Chips, Lay's Sour Cream and Onion and Dorito's Nacho Cheese Chips, 2 tubs of dip, and the aforementioned bottle of Diet Pomegranate 7-Up.  Awesome!  If we do this again, I'll have to unload all of this stuff back on you people.

Thanks also to HydroTech and CBKWit, who made an effort to swing by the tailgate even though they both had other plans for the day.  I know some of you guys had wanted to meet them, and I was glad not to be the only GoldenBlogger present.  To those of you who missed out on meeting TwistNHook, well, some might say you lucked out, but I'm sure he'll make an appearance at a future event.  Keeping him away from Cal football seems to be something only his wife can manage.  As for those of you who want to meet Yellow Fever, well, he lives in New York now, so the odds of that happening anytime soon are not great.

Finally, a big thanks to my wife, AndBears, who did a lot of the planning for the event, and did basically all the work in designing and getting printed our new banners.  Thanks, babe!

So, did the rest of you guys have fun?  Should we do this again sometime soon?  I'd be open to doing more stuff like this if there's enough interest.  Let me know what you think, and how I can improve the planning in the future.