Looking Back at Big Game 2008: The Failed PAT

Share All sharing options for: Looking Back at Big Game 2008: The Failed PAT

Good friend of the Marshawnthusiasts, Avi (aka "Bears Necessity"), thought it might be worth my while to take a look at something that happened during Big Game - specifically the failed PAT attempt.

When I first saw the game, I really had nothing to say on the issue other than it looked like Longshore got spooked and bailed out.

However, now I feel like I need to weigh in on the issue after being informed that there are rumors floating around on the internet that Longshore called his own number and decided to fake the PAT against orders of Tedford:

Nate told the tight end to go for the end zone and he would throw him the ball. Unlike the Levy incident, this audible occurred when the Big Game still was on the line. There are other distinctions from what Levy did as well.

and in another post by the person who said that:

There is more to the fumbled extra point in the big game than meets the eye.

The post above was also edited to apparently take out more sensitive information:

So what the heck happened on that play?

Before I give my opinion, let me just preface this by saying that I don't have inside info on what happened. Apparently, the poster who posted the rumor on the public boards of BearInsider.com has inside info or knows somebody who does, but I don't. I'm just going off of what I see and the knowledge I retain from my time with the team.

That being said, I watched the play now multiple times and here are my findings and the reasons for my conclusion:

I don't think Longshore called his own number and decided to fake the PAT without authorization from the coaches.

(1) No TEs went out to receive, instead they all stayed in to block. If the rumors are true, and Longshore did tell the TE(s) to go out, then how come they didn't? It's possible that Longshore did tell one or more to go out and they decided to not obey Longshore. But there is a chain of command on the field and the holder is at the top. The holder tells the long snapper when to snap the ball. The holder has the ability to call fakes. The holder is the "QB" (in the sense that he's the leader) for the PAT squad. If the holder says something, the team does it because it's the holder who has the best view of the defense.

This rumor that Longshore told the TE(s) to go out can be interpreted in two ways. First, either Longshore told only one player (perhaps two players) about the fake and not the others. Second, Longshore called the "fake PAT" command.

First, if Longshore only told one player about the fake and not the entire squad, well, that'd be foolish - so foolish that there would be no point in doing it. Not only would none of the other players know of the play which would inevitably increase the chances of failure but also because Longshore would get reamed by Tedford and the punishment would far outweigh the rewards. I don't think Longshore was ad libbing and called his own number or only told one player about the fake.

Second, if Longshore called the "fake PAT" command, then the PAT team should have executed the fake. There are certain things that the holder says before snaps. If you're around the team long enough, you learn what these special words are. Assuming the special teams terminology hasn't changed, even yours truly could call a fake PAT play. Although I can't hear if Longshore called out the order, if he did, the team should have executed the play regardless of the original playcall - yet nobody did. 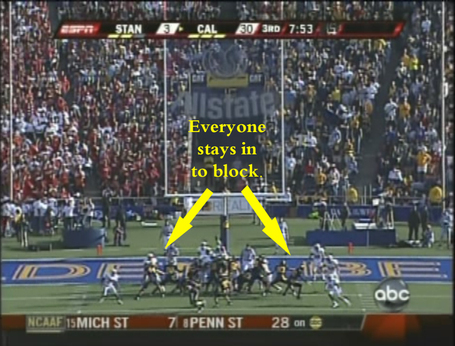 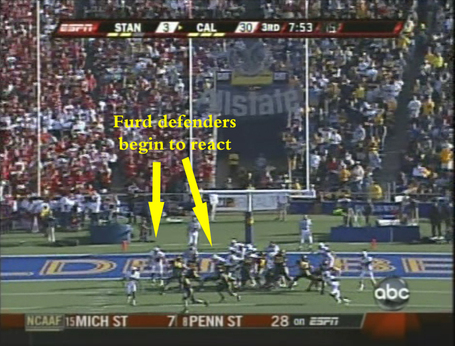 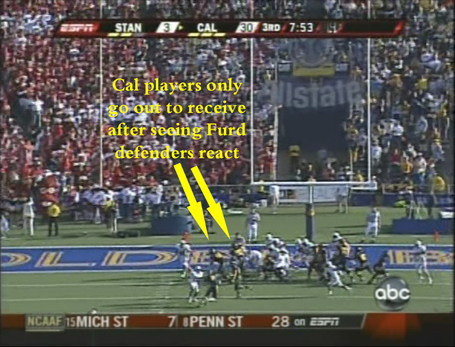 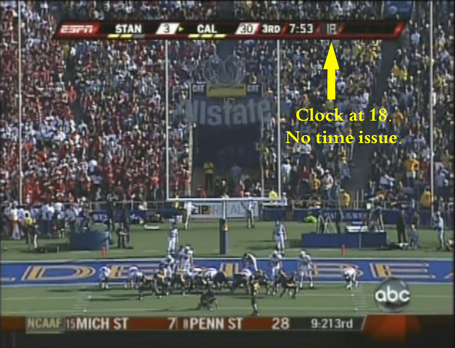 (4) Snap is slightly inside and the ball placement was off. This is perhaps the most convincing factor but also the hardest to see. If you watch the play, Longshore has his right index finger on the ground at the spot where Tavecchio wants the ball. In other words, when the ball is placed, Longshore is supposed to place the ball at that spot (all this is worked out prior to the play). When the snap occurs, the ball is slightly inside (towards Longshore) and Longshore is unable to get the ball down on the exact spot where he had his right index finger pointed prior to the play. Longshore does get the ball down though. It's not like Longshore didn't get the ball down. He gets the ball down on time, but it's inches off the mark. Specifically, a few inches forward and to the left of where Tavecchio wanted the ball (you need to REALLY look closely at the replay to see this). Perhaps Longshore felt like his ball placement was so off that Tavecchio would have missed or toed the ball and thus Longshore bailed out. 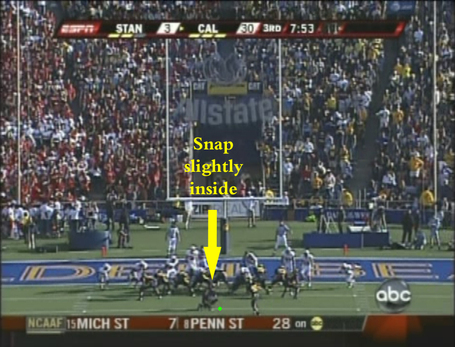 Picture above: Green dot represents desired ball placement for the hold. Ball is snapped into Longshore's body and cannot be seen. 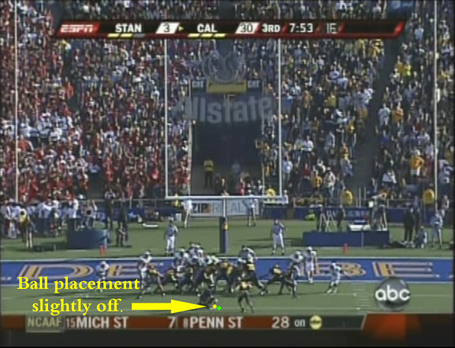 (5) Stanfurd had all 11 men on the field and so it's doubtful Longshore called a fake to take advantage of an under-manned defense. Count 'em. There are 11 defenders. I know it's hard to see, but I checked. So it's not like Stanfurd only had 10 defenders on the field. Trying to run a fake is a lot easier against 10 defenders than 11, so why do it against 11? 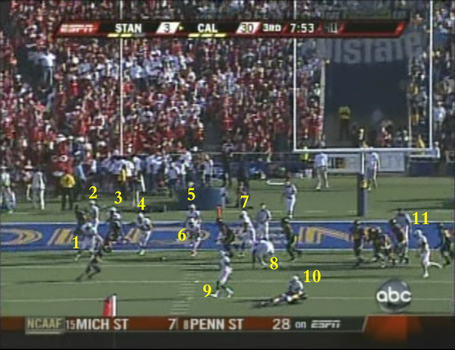 (6) This just doesn't sound like something Longshore would do. I don't know the guy personally. I know many readers sometimes jokingly (and others seriously) suggest that Longshore must have pictures of me naked, or I'm related to him, or I'm friends with him, because of the way I so adamantly defended Longshore last year, but I really don't know him personally. However, I have spent a lot of time around the guy at practices. He's a fairly serious guy. He does have his moments where he's a bit goofy - as do all the Cal QBs - but he never lets his own playfulness get in the way of team business. Judging from what I've seen from Longshore as a person and player, doing what the rumors suggests seems very unlike him.

I just can't accept these rumors that Longshore called his own number on that play or changed the play.

I think if anything, Longshore maybe thought there was a defender coming in and that's why he bailed or Longshore thought his ball placement was off enough to warrant bailing out.

But like I said, I don't have inside information. Maybe there is more that meets the eye. Until someone wants to come forward and really explain things or present some sort of sworn testimony, then I'm just going to call this rumor as very speculative and unsupported by the visual evidence at hand.

Finally, this rumor is originating from BearInsider.com. While that chat board is a great place to have tons of Cal related discussion, it is also the leading source of the anti-Longshore sentiment on the internet (I'm not saying everyone on BearInsider.com is anti-Longshore, but the anti-Longshore sentiment is clearly the strongest on that board than anywhere else on the internet). I suppose it's possible that this might be the work of someone who still harbors great Longshore hatred.

So in short summary, I don't find the rumor supported by the visual evidence above. The source of the rumor is coming from a traditionally anti-Longshore board which hurts the rumor's credibility, and there is no further explanation by those who supposedly know what really happened.

A few other notable arguments have surfaced since this post was published that I would like to address. Before we get to those arguments, let me just clarify that there are two possible ways that Longshore could have faked the PAT:

Theory #1: He told only one or two players on the PAT team that he was going to fake the hold and that they should go out for a pass. Additionally, Longshore did not tell the rest of the team. This theory seems to be the one which the internet rumor describes.

Theory #2: He called the full-out fake PAT command to the PAT team just prior to the snap.

One argument in support of the idea that Longshore faked the PAT was that the receivers had delayed routes - meaning they would fake the block, then slip out on a route after a second. This argument is extremely weak and ignores the indisputable visual evidence at hand. If you watch the replay, you can clearly see from the body language of the outside blockers (the ones who would normally go out on a route if it were a true fake) that they are blocking from the start and all the way. They only go out to receive once they see the Stanfurd defenders reacting to Longshore rolling out. Thus, the evidence at hand seems to disprove this argument in support of the two above theories that Longshore called a fake-PAT.

Third, Ohio Bear brings up a good point that is plausible. Ohio Bear says: "Nate may have called for the fake but perhaps he had discretion to do so?" This, is plausible. As I said earlier, the holder does have the power to call the plays. Usually, this commands are just to kick the PAT, but perhaps it is possible that prior to the game Tedford told Longshore to go for a fake if he saw a weakness in the defense. However, this argument falls under theory #2 - that Longshore called out the full-out fake PAT command and not theory #1. The visual evidene at hand disproves theory #2. Nevertheless, Ohio Bear does rebuttle nicely with the idea that perhaps the team didn't hear the pre-snap command to fake the PAT. This is possible. As of now, Ohio Bear's theory remains plausible either because (1) the PAT team didn't hear the fake PAT command; or (2) [this is my addition] that Longshore called the fake-PAT command and the team, being so used to just kicking the PAT, was caught off guard and didn't execute.