Still reveling, two days later.  Before I wax sentimental about Mack and Follet and Felder and all the rest, let's start with the hilarious.  Ordinarily I don't pay much attention to the video board announcements at halftime, but the first one caught my eye:

"Watch the Fake, Alamar!" -- Your friends in QQ

I was so stunned by the simple brilliance of the message that I froze, paralyzed with laughter for 30 seconds before I thought to snap a picture. By the time I recovered it was too late and the message was gone forever.  If anyone was quick enough to grab a shot, or if anyone knows the identities of the brave young alums who paid for it, please post it here.  I only wish that they had paid for an extra dozen words or so, in order to clarify that you can defend fakes with more than 10 players on the field.  Hopefully Alamar learned his lesson after the Maurice Jones-Drew game in 2005, but I wouldn't bet on it.

Happier times, for my sake:

Well, we won.  It was often, like our season as a whole, a weird, underwhelming, frustrating game.  It was choppy and sloppy, a highly flawed affair by a painfully flawed team.  Yet, when the game ended, we had a victory over a "name" opponent in prime-time on ESPN.  Instead of highlighting our mostly futile passing game, the post-game recaps and clips served as a de facto Heisman introduction for Jahvid Best.  I suppose the message is, if you're the reveling, glass-half-full type, "it may have been an underwhelming performance, but at least this guy plays for our team, and he'll play for us again next year."

It was encouraging to watch the offensive line have its best game since perhaps UCLA.  Stanford and UW were dominating performances, no doubt, but this was the first time in a while that the offensive line took over against a decent opponent.  Losing Alex Mack is a huge blow, but if the line avoids decimating injuries that it couldn't this year, it should be better as a whole next year.

The Nate Longshore era, for better or for worse, is over, and the final performance was fittingly mixed.  On the one hand, turnovers (as they generally do) essentially determined the game - with the game 95% complete, the teams were tied at 17 with 1 turnover apiece when the second Miami turnover gave the Bears the deciding touchdown.  Miami's quarterback Jacory Harris had two turnovers while Nasty Nate had zero, and in a game when the points-off-turnovers margin is also the margin of victory, that's a pretty big deal.  You also saw Nate's experience on display in the 4th quarter, when Boateng lined up on the wrong side of the formation.  Nate moved Nyan over to the other side, which paid off when Best ran a sweep to the same side for a big gain.  Perhaps a less experienced quarterback makes the same correction, but Riley certainly didn't adjust his receivers during the USC game on his TD pass to Vereen.

On the other hand, our 5th year senior QB was often outplayed by a true freshman making his second career start.  Cal fans were certainly spoiled by 1st round picks Boller and Rodgers, but this is a remarkable turn of events following Nate's terrific 3,000 yard campaign in 2006, and especially puzzling given Tedford's acumen with quarterbacks.  Nate looked jittery and unsettled, as he often has since his ankle injury at Oregon last year.  Our offensive line gave Nate plenty of time, and while our receivers slipped a few times on good passes (a comeback route on the near sideline comes to mind), Nate badly missed a number of reads and throws.  To make matters worse, Miami often played our receivers man to man with no safety help.  Short of leaving a wide receiver completely alone and uncovered, there was nothing more Miami could do to show a complete lack of respect for our passing game.  That Best was able to run for nearly 10 yards a carry with 8 or 9 defenders in the box is remarkable.  That Nasty Nate struggled so much with ample protection and a defense basically ignoring our passing game was troubling.  Thanks to Danzig, let's remember the good times:

The defense played another strong game, led by the usual suspects: Syd, Alualu, Rulon, Felder, and of course Follett.  There were a few too many third down conversions given up (Miami went 7-19 and 2-2 on 4th down), and I could have done without the corner blitz from the strong side, which never resulted in a sack and often took our best cover guy, Syd, out of the secondary.  Hagan had a so-so game and appeared to be benched for Conte after giving up the fade touchdown, which was a little disappointing after his fantastic season.  Still, holding an offense to 3.7 yards a rush and 4.7 yards per passing attempt is pretty fantastic.

Best's 40 yard touchdown run was the play of the game early, when it looked like we might blow the game wide open.  Unfortunately, it didn't turn out that way, and with less than 5 minutes to go we found ourselves in the unenviable position of potentially wasting Best's spectacular performance and sending our seniors out with a deflating loss.  Miami had the ball with the game tied and a chance to drive the field for the winning score.  You know what happened next.

Throughout his career, Zack Follett has made enormous plays in critical situations: the huge hit and forced fumble on Ainge, which set the tone for the Tennessee game and 2007 season, and the forced fumble at Maryland to start the second half, which gave us a (ultimately wasted) chance to get back in the game, come immediately to my mind.  His hit and forced fumble on Jacory Harris wasn't unusual, not when you have 10+ sacks and 5 forced fumbles on the year, and it clearly isn't out of character for Follett to alter the course or outcome of the game.  It was simply the perfect ending to a fantastic Cal career.

We are in better position to compensate for the loss of our senior linebackers than we were with our receivers last year.  In Young and Mohamed, we essentially have 2 returning starters, and a lot of slightly experienced young talent in Holt, Kendricks, and Bishop among others.  Mohamed had a strong game with a great interception and a crucial tackle on Miami's final drive, wrapping up the ball carrier with a blocker between them to keep the clock running and kill 30 seconds in the game's final minute.  What is not so clear at the moment is who will replace Follett's remarkable penchant to step up in the biggest moments.  Someone will make the tackles, but I doubt anyone will immediately replicate Follett's impact. 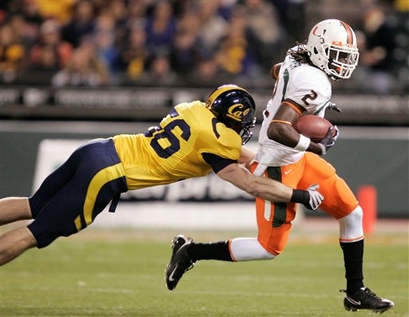 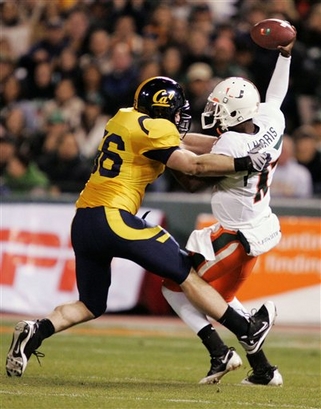 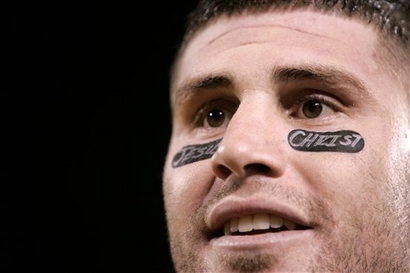 It was the last game for one of my all-time favorite bears, Alex Mack.  It seems like he's been here forever, because he's been so good for so long, and it was moving to see him run around the edge of the field after the game, soaking up the victory and slapping hands and giving hugs to Cal fans for the last time, as if he did not want his Cal career to end.  I didn't want it to end, either. 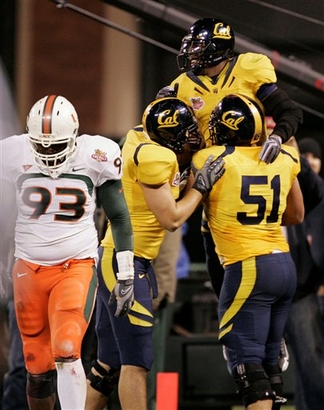