Want to know who is starting at QB?  And more importantly would you like to know why?  Read on!

So my day started out great.  Wake up at 6:30 am to 40 degree weather.  Go outside to the ice cold car and start driving to San Francisco.  Get a "speeding" ticket on the Bay Bridge.

Yeah, I'm not visibly pissed about the ticket, but I sure do think it's bat guano that it happened.  The CHP officer said I was going 65 on the Bay Bridge where the limit is 50.  Now, I don't think I was going 65.  I was watching my speed because I knew the speed limit was 50.  Furthermore, I even saw the CHP officer pulling onto the bridge from Angel Island (or whatever the name of the island is half way across the bridge), so I made a note to myself not to speed..

Let's just assume, arguendo, that I was going 65 mph, why me?  I mean, I definitely wasn't the fastest car on the Bridge.  Other people were going faster (albeit not a lot, but they were going faster).  I feel like the CHP officer just took his pick of cars and picked me.  WTF.  Why me?  I wasn't in some hot rod red sports car.  Just some mundane silver German car.  WTFWTFWTF.

When I did see the officer pull in behind me, I mentally asked myself if I was speeding.  I looked down at my speedometer and it was like at 52.  So at least, when he decided to tailgate me for a bit, I surely wasn't speeding.  Perhaps I was unconsciously speeding earlier, but damn, I don't think I was going 65 and I definitely wasn't the fastest car around me.

Anyways, that sort of ruined my morning.  BTW, does anyone know how much a speeding ticket on the Bay Bridge is?  Is it more because it's on a bridge?

So I got into SF around 1030 am and make a quick stop at the HydroTech family pad in SF before starting to make my way over to Yerba Buena Gardens for the pep rally... 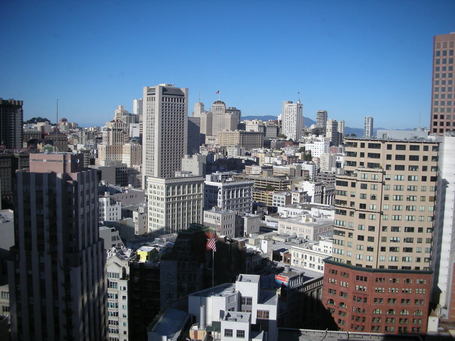 The view from the HydroTech family pad looking NW 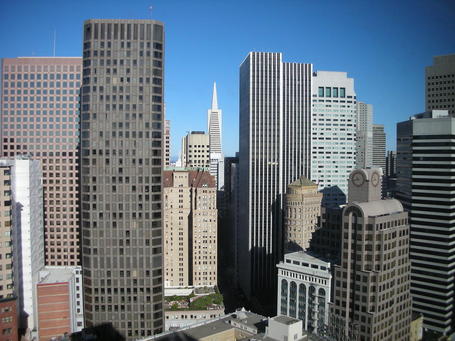 The view from the HydroTech family pad looking N. 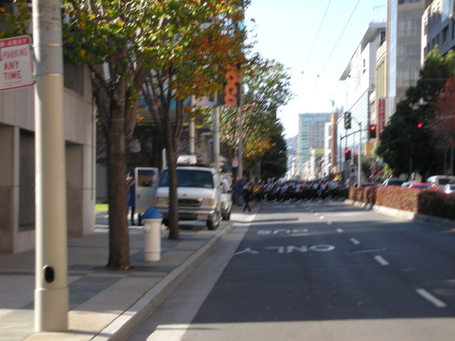 I start walking down Mission and what do I see?  None other than the Cal Band blocking traffic on the eastbound side of Mission. 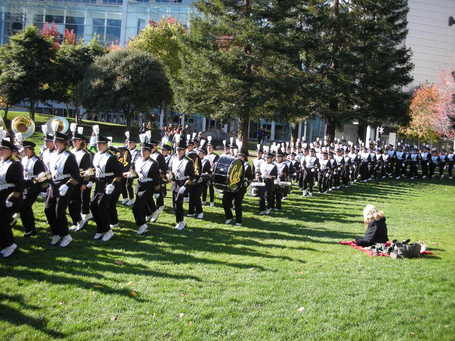 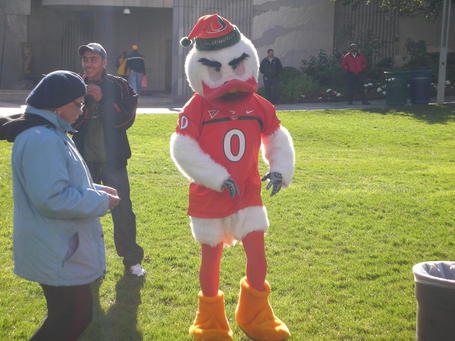 Donald Duck impostor shows up with the Miami band, cheerleaders, and dance squad in tow. 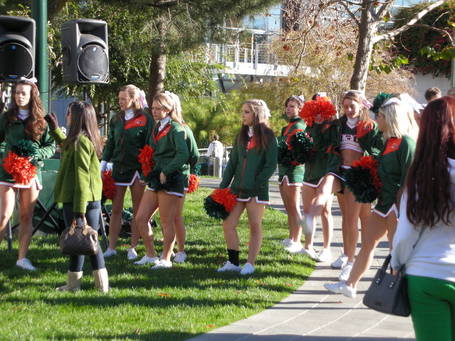 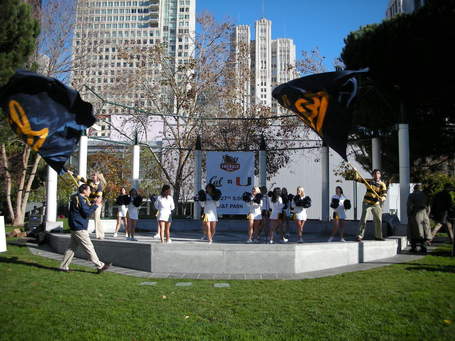 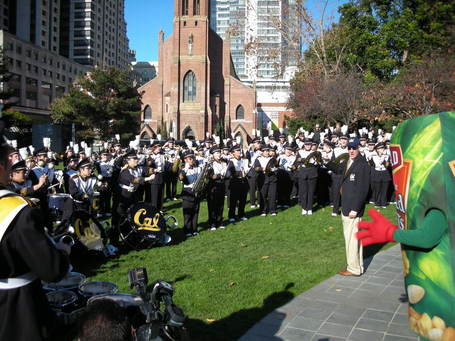 Cal Band playing fight songs and the Emerald Nuts canister mascot getting down. 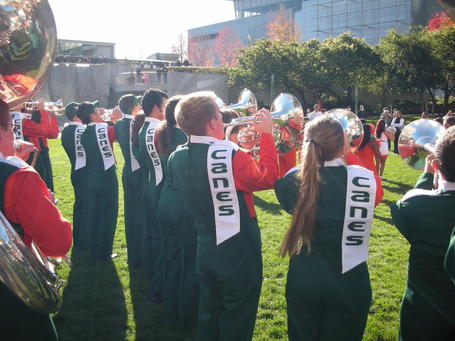 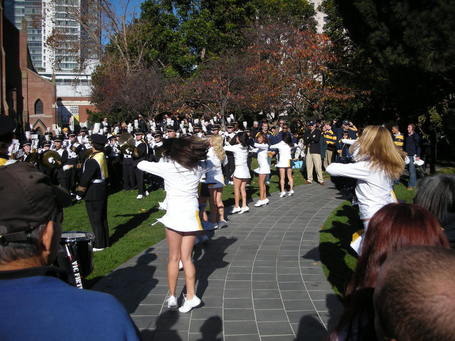 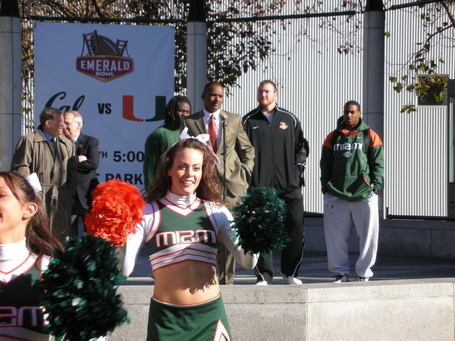 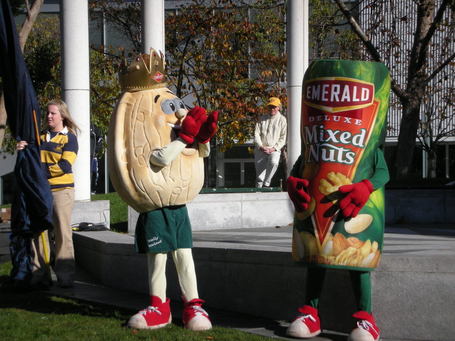 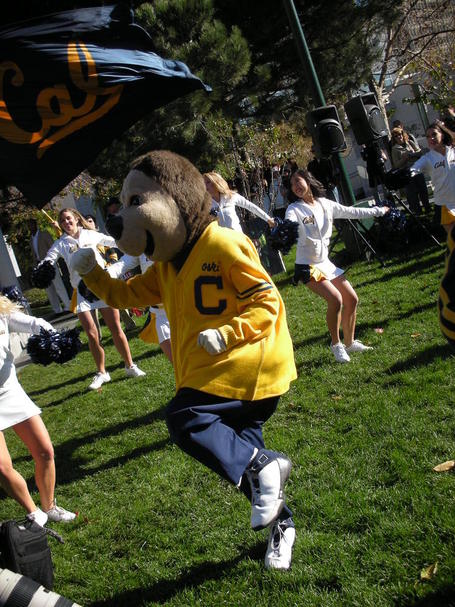 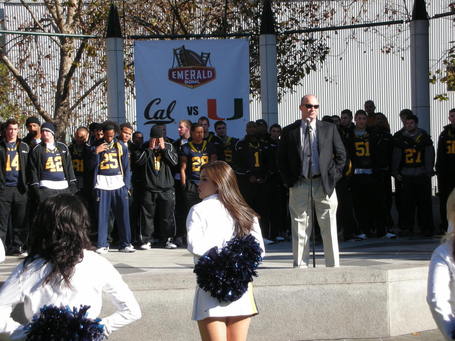 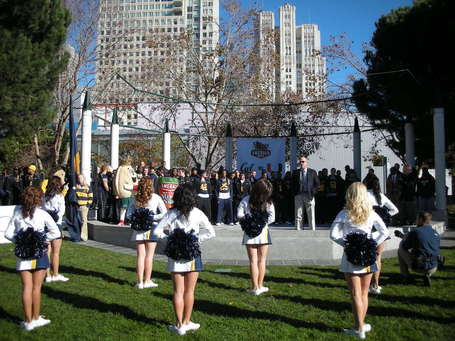 Tedford talking some more.  Some Miami fan behind me said "somebody forgot to tell him (Tedford) to only bring three players.  He didn't get the memo!"  in regards to the fact that Miami only brought three players. 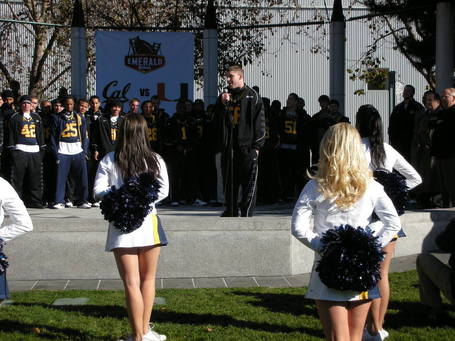 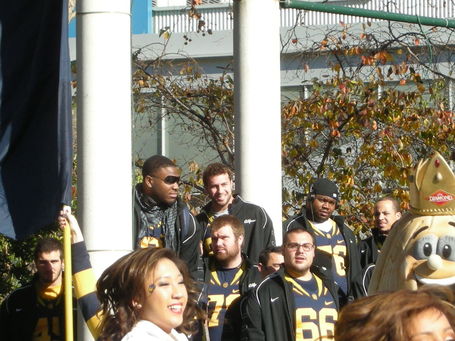 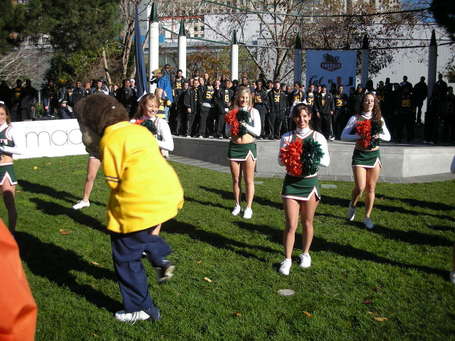 Oski was doing some dancing and stuff while the Cal Band was playing.  Then when the Cal Band finished, Oski kept dancing and fooling around.  The Miami band started playing so the Miami Cheerleaders came over and started to dance.  Oski's back was turned to them so he didn't know he was dancing in front of the Miami cheerleaders when they were doing their thing.  The brunette cheerleader in the front politely got Oski's attention and alerted him to the fact that he was sort of in their way. 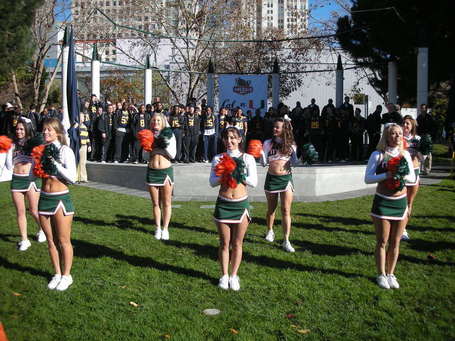 Miami's cheerleaders dancing with the Cal Football team checking them out from behind. 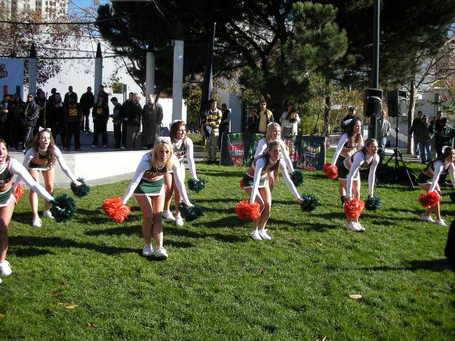 Miami does this thing where they put their hands up in the air, palm open, with fingers apart and shake their hands.  Then their cheerleaders put their hands down, and then they yell something which I couldn't understand. 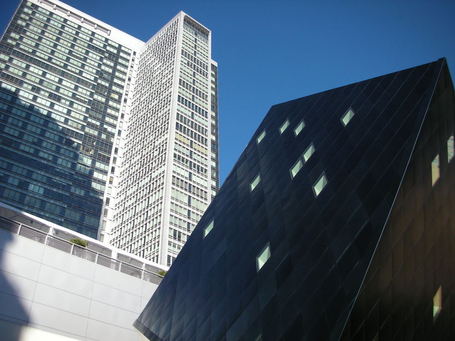 So then the pep rally ended after about 30 minutes.  The Cal Football team began walking to the St. Francis hotel for the Luncheon.   Here is a picture of the new Mormon Museum (I think) and the Double Tree Hotel or something.

On the way over to the St. Francis, I happened to be walking behind Kevin Riley.

Riley had a heavy and extremely noticeable limp.  It is without a doubt that he will not start tomorrow.  Avinash from Bears Necessity pointed out that the newspapers were hinting at the fact that Riley was injured but this bit of information seemed to go un-noticed by most Cal fans.  After seeing how much Riley was limping today, in person with my very own eyes, I have no doubt that the reason why Longshore is starting has nothing to do with "favoritism" or "Longshore's NFL career" but more with the fact that Riley would not be as effective on the field as Longshore. 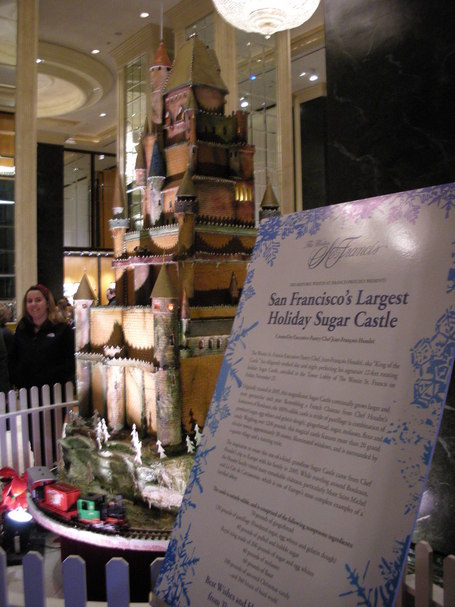 Some huge sugar castle thing in the lobby of the St. Francis. 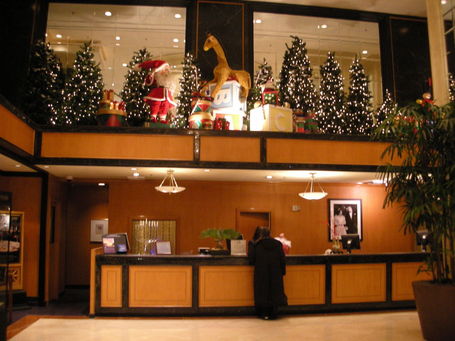 The lobby of the St. Francis. 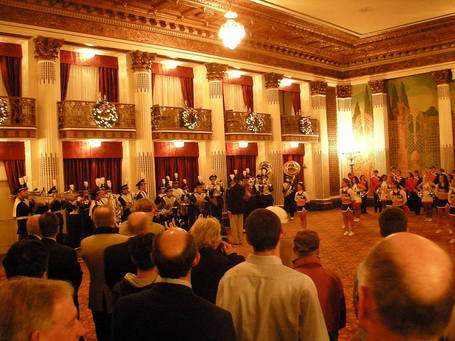 The two bands playing in the Grand Ballroom prior to the Luncheon. 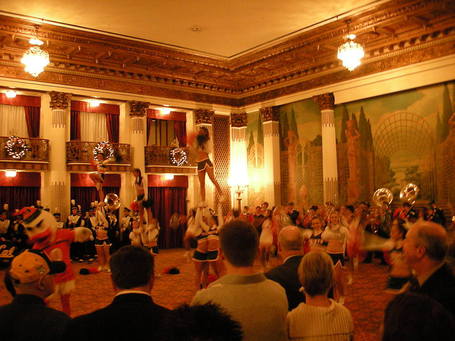 The Miami cheerleaders do backwards flips and stunts.  Only the really small girls got hoisted up in the air. 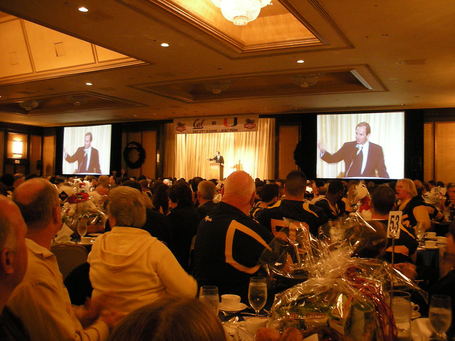 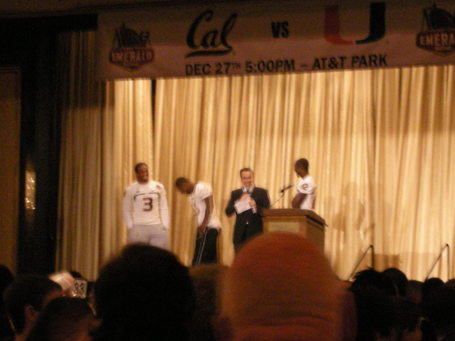 The ESPN analyst guy who will be calling our game introduced some Miami players.  One was their QB, their RB, and some other guy. 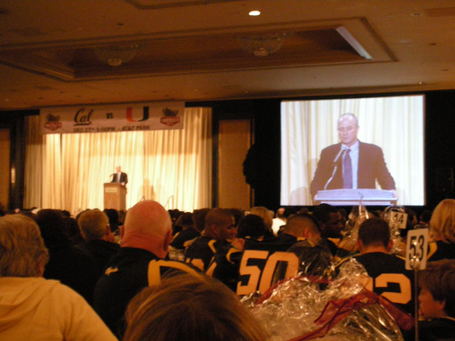 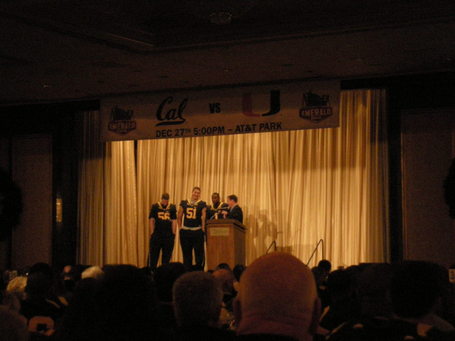 Then Worrell Williams, Alex Mack, and Zack Follett walked onto the stage to do interviews. 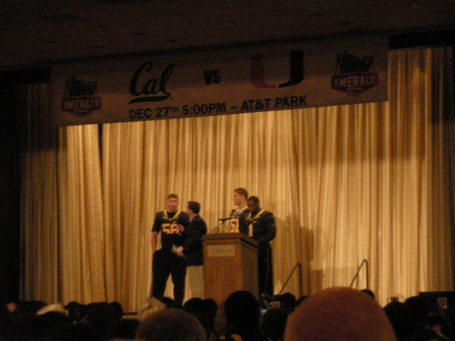 When Zack Follett started doing his interview he became pretty nervous.  You could tell he's one of those guys that once he gets going, he just can't stop without saying something he's not supposed to.

In regards to the stadium being about 90% Cal fans, he said something like: "Well, a few years ago in the Las Vegas Bowl, BYU filled that stadium and yet we (Cal) still won so they (Miami) have a chance."

Also, Zack started giving away some of our defensive gameplan.  He said that usually he's in there rushing the QB and stuff, but this game since they (Miami) have a mobile QB that he's going to have to stay outside and contain.

One of the defensive players at the table next to mine hissed to the players at my table: "He's saying too much!"

I wonder if the Miami coaches are going to make any last minute changes after hearing Zack's words.  I wonder what Tedford was thinking when Zack blurted that out.

Final tidbits from the players at my table:

(1) They all really like Cignetti.  They all said he's really knowledgeable and intense.  One of the players told me a story about how at the beginning of the year when Cignetti met with him during 1 on 1 meetings, Cignetti asked the player what the goal was this year.  The player responded that the goal was to play to their potential and stuff.  Cignetti said that was true, but asked what was the main big goal.  The player responded that the big goal was to win the national championship.  Cignetti then aparently jumped up, pointed his finger at the player and said "F--- YEAH IT IS!"

All the other players at my table laughed and confirmed that is something that Cignetti would do.  They added that he's really loud and yells a lot in practice.  One player noted how he can't tell when Cignetti is messing around or serious because he's so nuts and loud.

(2) One of the players noted that the biggest change that Cignetti brought to the team was probably his change of the team's protection schemes (pass protection schemes).  One player noted how he still feels like the team isn't as good at them because it's still new to them and that they are just still too used to the old blocking schemes.  The player mentioned that he didn't necessarily think they were all that better than what they used in previous years.

(3) All the players think Jahvid Best will go pro after his junior year.  They made it sound like it wasn't just their hunch but that they had heard something themselves.

(4) The strongest defense the players faced this year was USC.  One player stressed how USC's defense is the best "team defense" in that the entire team is really good whereas other defenses will have a good defense but it's only good because they scheme around one good player.

(5) The worst team the players faced this year was Washington State.  Ironically, said one player, the team felt that WSU was actually pretty good before they played them since WSU held up pretty well against Oklahoma State the week prior.

(6) The dirtiest team that the players faced was probably UCLA.  When asked for explanation on why, the players said that they talk a lot of smack and that things get nasty in the pile with "twisting ankles" and "grabbing balls."

(7) The team will most likely be wearing yellow (gold) tomorrow.  Follett let it slip that he wants to see "bumblebees" swarming Miami's offense.