Share All sharing options for: Learning More About Women's Basketball Part I

Look, I know that the vast majority of our readership, especially those guys from CougCenter, are women's studies majors.  So, there's no real reason to go over the entire history of the American feminist movement as it relates to Cal Women's Basketball.  But just for the few stragglers who might have slept through "Alternate Sexualities In A Transnational World," here is a quick primer.  Let's Wikped! 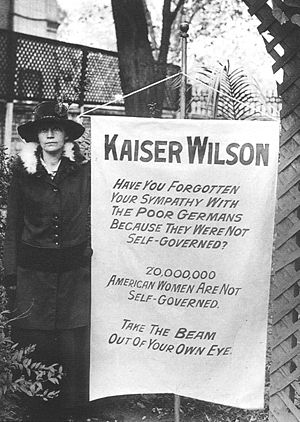 First-wave feminism refers to a period of feminist activity during the nineteenth and early twentieth century in the United Kingdom and the United States. It focused on de jure (officially mandated) inequalities, primarily on gaining women's suffrage (the right to vote).

Second-wave feminism refers to a period of feminist activity which began during the 1960s and lasted through the late 1970s. Where first-wave feminism focused mainly on overturning legal (de jure) obstacles to equality, second-wave feminism addressed unofficial (de facto) inequalities as well as official ones.

And that brings us to the Third Wave.

Third-wave feminism is a term identified with several diverse strains of awesome domination of collegiate American basketball in the earliest part of the 21st century by California women's basketball.  The movement arose as a response to perceived possible failures and backlash against initiatives and movements created by Ben Braun c. 1996 through 2008. 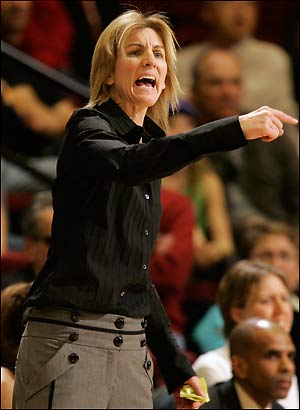 "I have many buttons on my pants!" via i.a.cnn.net

Any post on the great job Coach Boyle has done must start on March 16, 2005 when Sandy Barbour relieved the previous coach (Coach Caren Horstmeyer) of her duties.  At that time, Cal had been sub-par for many years:

About one month later, Coach Boyle was on board!

"I'm ecstatic that the University of California has successfully secured a coach of Joanne Boyle's character, professional expertise and vision," Barbour said. "Throughout her career, Coach Boyle has established that she has an affinity for high quality academic institutions like the University of California and has clearly demonstrated that she understands what it takes to build and sustain a women's basketball program that will compete with the nation's elite programs. I look forward to all of us working together with Joanne and her staff to bring Cal women's basketball to the forefront of the Pac-10 Conference and the national scene."

Boyle comes to Cal after serving three seasons as head coach at Richmond, where she directed the Spiders to three consecutive 20-win seasons, including a 23-8 record and the program's first NCAA berth in 14 years in 2004-05. The Spiders finished with a 12-4 record in the Atlantic 10, their best mark in the four years since they joined the conference. In January, the program received its first-ever national ranking - No. 25 in the ESPN-USA Today-WBCA Coaches' Poll.

This past season, Richmond earned the program's first at-large bid and third overall invitation to the NCAA Tournament. The 11th-seeded Spiders lost to sixth-seeded Florida State, 87-54, in the first round. Also in 2004-05, Boyle coached Richmond to wins over Virginia, Liberty and Dartmouth - all NCAA Tournament qualifiers - and fielded a team that led the Atlantic 10 in three-point field goal percentage (35.1%) and ranked in the top five in the conference in 13 statistical categories. For Boyle's efforts, the Richmond Times-Dispatch named her the Virginia State Coach of the Year. 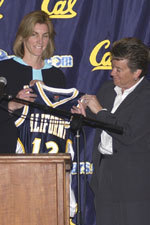 But before Caren Horstmeyer left the team, in her last year, she delivered to Cal one of the finest recruiting classes in school history.

BERKELEY, Calif. - California has signed five players who comprise the sixth-best recruiting class in the country and the best on the West Coast, according to Blue Star Index, Golden Bears' head coach Caren Horstmeyer announced Wednesday on the first day of the early signing period. Oakland's Devanei Hampton and Alexis Gray-Lawson, El Cerrito's Shantrell Sneed, San Francisco's Jené Morris and Modesto's Ashley Walker have inked letters of intent to play basketball at Cal beginning with the 2005-06 season. The quintet are rated among the top seven athletes in Northern California.

"Our talented class is great for Cal and for the Pac-10," said Horstmeyer, the 2004 Pac-10 Coach of the Year. "My staff has done an incredible job. We know that our program has grown. To keep some of the top players on the national scene home is key. Northern California had some of the best players in the nation this year. It's exciting. There are a lot of people who want to watch these kids play. We knew when they were freshmen that we wanted to have them at Cal. They want to be a big part of elevating Cal to national prominence."

Hampton, a 6-3 post, and Gray-Lawson, a 5-8 point guard, teamed as juniors to lead Oakland Tech to a 2004 state championship, a No. 10 national ranking by USA Today and a 26-4 record. Hampton set a new state regional final rebounding mark with 27 boards. As a junior, Hampton averaged 22.5 ppg, 12.0 rpg, 4.0 bpg and 3.3 apg to earn Street & Smith second team All-America, USA Today All-America and first team Cal-Hi Sports all-state honors. She also received USA Today All-America recognition as a freshman and was picked to the first team all-area squad as a junior. Additionally, Hampton played for the 2004 USA Youth Development Festival West Team, along with Gray-Lawson. Only 48 athletes were invited to the prestigious event.

Of course, if you are going to piece together an introspective look at this year's team, you also have to take a gander at Coach Boyle's first recruiting class.  Although perhaps not quite at the level of the previous year, this has been incredibly fruitful for Cal, too.

"It's a good first class for us," said Boyle. "They fill some gaps in positions we need some help. Signing three players will give us more depth. We've had some injuries, and we're typically going eight people at practice. The best thing is that all three of the players we've signed really understand the game. They have high basketball IQs and are very committed to helping us get to the next level."

So, when you take a look at the Cal women's roster, you might recognize some names.

Now, what has been unfortunate this year is that two of their best players, Hampton and N'diaye, have lost some time to injury.  But the upside is that has given some of the younger players, like Kelsey Adrian, time to get playing time.  And, even though the focus is on this year, it's always prudent to keep an eye on the future.  After all, when you have 7 juniors and seniors on the team, it means 2 years from now, things could be bad.

BERKELEY - Seven highly-ranked student-athletes, all of whom are ranked in the top 50 by at least one scouting service, have signed National Letters of Intent to play basketball at California beginning with the 2009-10 season, Golden Bear head coach Joanne Boyle announced Wednesday.

Included in the Bears freshman class of 2009-10 are two Bay Area standouts, Sacred Heart Cathedral High's Tierra Rogers and Pinole Valley High's DeNesha Stallworth, who will be joining four Southern California prep stars, Talia Caldwell of Marlborough High in Los Angeles, Layshia Clarendon of Cajon High in San Bernadino, Eliza Pierre of John Muir High in Pasadena, and Gennifer Brandon of Chatsworth High in Sylmar, and one Oregon product, Brenna Heater of Ashland High in Ashland. Of the seven Bear recruits, five are rated in the top ten at their position (as ranked by ESPN HoopGurlz) and all are in the top 15.

Look, the Cal men's basketball team needs pretty much anything and everything to go right to make the tournament this year.  They have a lot of potential and a lot of excitement, but this might not be their year yet.

But the women's basketball team is already there.  They are already reaching a pinnacle of success that honestly the men's team hasn't had in a long time.  I know that the men's team is the money maker and viewed as the sexier sport.  But I'm just hoping to promote some more interest in the women's team.  I attended the Cal-Stanford game last year at Haas.  The scene was electric there in a way that we haven't seen at a men's game in a while.  Hopefully, Coach Montgomery can bring that back.  But don't forget about the women's team.  I know that Berkeley can support it, I saw that last year with my own eyes.  Let's continue to support it.  Not only is it good for our Cal fandom, but it's also good for the community and for women across the world.

In the next post, we'll take a closer look at some of the players who make up this team.  Go Bears!