for ruining what I can only assume has become quite the early morning tradish for you.  Maybe its when you first get up, maybe its when you first get to work, but you hurredly scurry to your computer looking ofrward to the wild hilarity of the DBD.  "Oh, DBD, you always know how to start my day right with your esoteric pop culture references and inane similes."  Those delightfully inane similies.  And you cant forget the metaphors.  seriously, though, you cant.

But, alas, today, I won't be writing something with the usual wit and mind-blowing laugh-osity of the normal DBD.  Instead, I'll be handing down my edicts on the SFJazz spring show.  I just got the mailer, read through all the shows and am EXCITED. 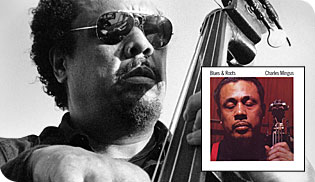 EPIC!  EPIC!  Every Tuesday in NY, I think it is, this band plays with the Mingus Big Band.  Or maybe the MBB just plays alone.  EIther way there is one of hte Mingus tribute bands playing every tuesday in NY.  Every fucking tuesday.  Im lucky if the Mingus Big Band comes out here once a yera.  they came out earlier htis year and I caught them at Yoshi's.  TWICE! 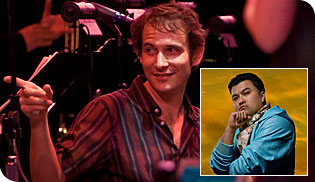 This one is kind of interesting.  this is a young, local guy.  Saw him and his realistic orchestra open for the Bjorkestra earlier this year.  They do like a jazz orchestra meets funk band sort of thing.  If you like trombone see this guy.  Hes doing some sort of jazz hip-hop symphony with the dude in the insert.  No idea what its gonna be like, but he impressed me in the first show.  Could be unique, modern, might be something to check out. 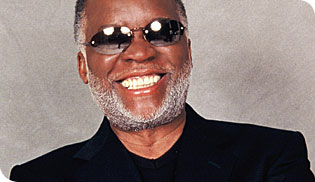 Theres 3 pianists I love:  Gene Harris for his blues awesomeness, Oscar Peterson, for averaging a triple double (lame joke, I know), and Ahmad Jamal for his use of space and repetition.  Let me put it this way, here is a musician so amazing, so well respected, so legendary, Miles fucking Davis put him down as a major influence.  MILES DAVIS.  Miles Davis died almost 20 years ago!  This guy has been around FOREVER.

And ya, sometimes the old guys dont have it anymore.  I went to go see Elvin Jones play at Yoshis many moons back and it wasnt the same.  But that was like an 80 year old drummer.  This should be different.  All Im saying is that when Miles Davis says you migfht want to see this show, YOU MIGHT WANT TO SEE THIS SHOW.

There are a lot of great shows this year in a wide variety of different styles.  Guitar, Afro-jazz, sultry singers, hell even jazz violin (no not Regina Carter somebody else Ive never heard of).  It behooves you to check out a show.  Maybe not the above 3, because those might just be shows that appeal solely to me.  Everybodys taste is different.  But if you like Sinatra, a strong liklihod, check out the Michael Feinstein show.  If you like the guitar, a strong liklihood, there are like 5 of the best jazz guitarists on the sked, no joke.  They have an insane lineup of jazz guitarists this year. For realz yo for realz!

Support your live jazz musicians.  Forget BritBrit's comeback, forget whatever hte latest rap hit is, it most likely is just about demeaning women and driving fast cars, support the people whose CDs dont sell very well in comparison and need their tours to really help support themselves.

So, again, to all except for that JShufelt, I'm sorry.  You'll have to find your comedy somewhere else.  And dont tell JShufelt, because hell go there and ruin that comedy, too!!!

Here are some more links.

BERKELEY - University of California junior outfielder/first baseman/pitcher Blake Smith has been named the nation's 16th best player, according to The College Baseball Blog The College Baseball Blog. Smith was earlier selected to the Wallace Award Watch List as a potential player of the year candidate for the 2009 college baseball season. He was also named the seventh best prospect from Team USA by Baseball America in early September.

Smith was instrumental in the USA Baseball National (Collegiate) Team capturing the gold medal at the IV FISU World Collegiate Baseball Championship in the Czech Republic this past summer as the USA squad topped Japan, 1-0 in 12 innings for the title on July 27. He not only helped pace Team USA to an undefeated 24-0 record, he was the team's leading hitter during the national team's summer tour with a .327 average. Smith finished the summer 18-for-55 (.327) overall with five doubles, a triple, three home runs and 13 RBI in 20 games. He was also one of the national team's top relievers, sporting a 1-0 record with a 0.00 ERA and two saves, striking out 11 batters with only three hits and three walks in 9.0 innings. Another highlight for Smith was going 1-for-3 with a home run versus a Cuban squad that competed in the Beijing Olympics.

Last spring, Smith batted .296 with 11 doubles, two triples, 12 home runs and 43 RBI for Cal. On the mound, he was 3-0 with a 3.80 ERA and had 36 strikeouts in 21.1 innings. Smith also threw two runners out at the plate from right field during the year and hit a two-run homer against Long Beach State at the NCAA Regional in Long Beach.

In the 100th season of Cal basketball, we continue our countdown of the greatest teams in school history. Today: No. 4.

Cal center Alex Mack has been named to the Associated Press All-America third team. Alabama’s Antoine Caldwell was named first team and A.Q. Shipley of Penn State was picked to the second team.

BERKELEY — Last weekend's practices allowed Cal's coaching staff to get a good look at some of the team's younger players. It also was a sneak preview of some of the story lines to come next spring.

"Brock and Beau will be right there competing for the job," coach Jeff Tedford said.

Riley has been through this before. He went through a much-publicized competition with Nate Longshore for the job in the fall, and the competition continued throughout the first half of the season. Although Riley finished the year as the starter, he hasn't done enough to put a stranglehold on the job next year.

Tedford said he's been happy with the development of Mansion, who, as the third-stringer, rarely gets any reps during practices. But Mansion excelled as scout team quarterback last season and came to the program armed with talent and expectations — much like Riley and Longshore.

Cal picked up a couple of junior college defensive ends over the weekend, according to a couple of websites. The Bears will welcome Ryan Davis of Cerritos College and Jerome Meadows of San Jose City College next season. Davis is regarded as a defensive end/linebacker and a potent pass rusher.

So, go to a show.  Enjoy some live music.  Take your loved one.  And GO BEARS!