OK, sure, the Bears beat Seattle Pacific 91-70 Thursday night, but against a Division II team, the victory left a lot to be desired.  Imagine the varsity team having trouble putting away the JV squad, and you can get a pretty good idea of how unsatisfying this victory was.  I know that not too many of us were expecting Coach Montgomery to work miracles in his first season at the helm of the Golden Bears, especially considering that he himself admitted that the roster was not stocked full of Pac-10-caliber players, but until you see it on the court, it doesn't really sink in. 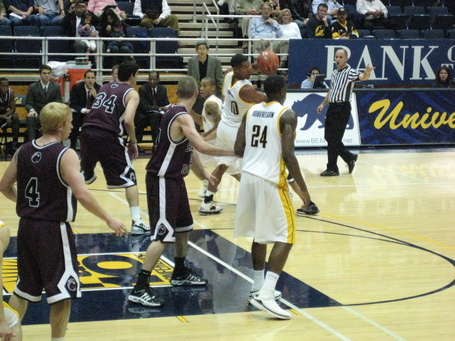 Seattle Pacific proved to be a more difficult matchup than previously anticipated.

Not that this team is terrible; far from it.  There are a number of talented players on this roster, and offensively, I don't know that this team is going to have too much difficulty scoring.  Against what should have been an overmatched Seattle Pacific squad, the Bears put up 91 on the scoreboard while substituting liberally, but were unable to really pull away from the Falcons until midway through the second half.  The reason?  Sloppy team defense.

Individually, there were some nice efforts, but in the first half at least it seemed like it would only take a couple passes for the Falcons to find an open man.  I saw far too many open perimeter jumpers, and far too many easy inside layups for my liking.  I'm not sure whether the cause was laziness or confusion, and I suspect it was a combination of both.  For a team that may at times be physically dominated inside, they are going to need to be a lot better fundamentally, and a lot better on the perimeter.

The Bears took only a 7-point lead against a Division II team into halftime, but came out with a renewed fire in the second half, picking up a lot more turnovers and limiting a lot more of Seattle Pacific's offensive sets.  The Bears picked up 8 steals on the night, including 3 by Jerome Randle, who also had a sterling 7-3 assist-to-turnover ratio.  Also making an impact defensively is my favorite new Bear, Jorge Gutierrez.  Though he didn't make a huge dent in the scorebook, he was all over the place in his 15 minutes, putting in some big-time effort (and falling on his ass a couple times).  I look forward to seeing more of him this season.

Of course, I would be remiss not to mention the MVP of the game, Theo Robertson, in his first appearance for the Bears since sitting out last year with an injury.  The man clearly missed the game, and came out shooting absolutely on fire.  29 points on 10-14 shooting nearly double the total of every other player in the game (Randle had 15), and without his hot shooting, the Bears might have trailed at the half.  I really do believe the Bears might have been a tournament team last year had he been healthy. 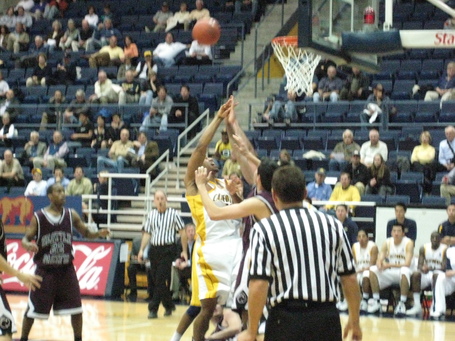 Also worth noting is Jamal Boykin's double-double, as he posted 12 points and 11 rebounds, the latter figure more than doubling the total of the next highest player in the game (Omondi Amoke had 5).  Patrick Christopher will be a central figure of the Bears' offense this year, but he wasn't tonight, shooting just 6-13, including 0-3 from beyond the arc.  However, I think he's the kind of player that just needs to keep shooting through his cold streaks, and that's exactly what he did tonight. 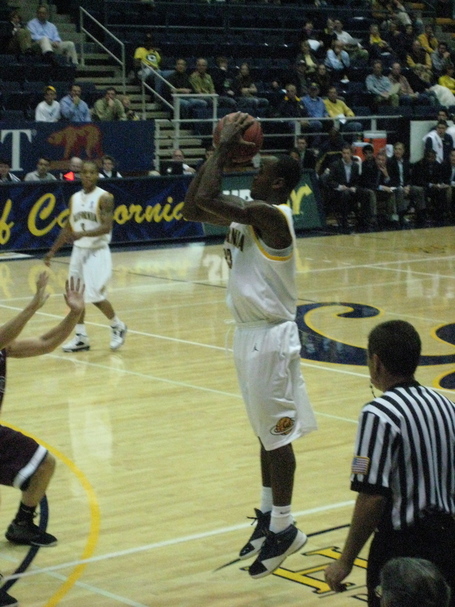 The final starter (besides Randle, Christopher, Robertson, and Boykin) was Jordan Wilkes, and I think the jury is still out on him.  His displayed a nice shooting touch, but it remains to be seen whether he can push around big bodies inside, as the Falcons didn't really have that much size to match up with him.  He'll keep getting minutes, but the Bears aren't going to come close to having the presence inside they did last year.  Thank God Kevin Love is in the NBA.

As Coach Montgomery said the other day at Cal's Media Day:

But I have to remind myself that we must be patient and allow these kids to absorb what we're trying to do. It's just going to take some time, there are no ifs, ands or buts about it. We've got a lot of youth out there, a lot of kids who haven't played at the college level. We've given a lot of stuff to them and now we've got to try and slow down and allow them to execute those things. We'll be better in December than we are in November and hopefully better in January than we are in December. That's what we have to recognize. It's just baby steps at this point in time. We're trying to teach fundamentals.