Share All sharing options for: Q+A with Conquest Chronicles

I used to just like Conquest Chronicles. Thought they were good guys. Then, they sent a Phillip Glass reference in answering one of our questions. They are TRUE American heroes. I love them so much right now! Which means I hate them SO MUCH right now. Being all nice. Loving Phillip Glass, too. AH!

Why must you make it difficult for me to hate USC? Why?????? All I've ever wanted to do is hate USC. Ever since I was a young lad, growing up as a slave in the service of Watto, a junk dealer.

As an engineering prodigy, I would spend my day building or repairing nearly anything, as evidenced by the creation of my own protocol droid, C-3PO and podracer. Both from salvaged parts! 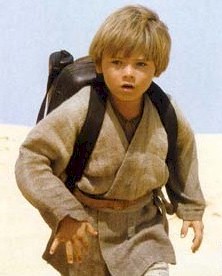 But these Conquest Chronicles guys come rolling in being all nice and now all I can do is showcase my complete and total inability to emote or even project a semblance of emotion. Well, that and read the answers to our questions.

Behind the fold. Go Bears!

1.) How bad is your offense this year? Worst since Carroll has been at USC?

Number wise USC's offense is not bad at all. USC is currently 10th in the country in total offense and tied for 9th with Penn State, Texas, and Florida in yards per play. It would be more fair to say the offense is inconsistent. It seems that if Sanchez fails to connect on a big play early in the game then he begins to take many more shots down field and tries to force something to happen. This tends to stall things a bit, but even then the offense is still relatively productive. I do wonder sometimes though why Sark doesn't call a few more running plays though, but thats a topic for another time.

2.) How good is your defense? Best Ever?

I think most have heard the pertinent stats regarding SC's defense, but here they are again just for everyone's reference. USC leads the nation in allowing only 211.6 yards and 7.1 points per game. Even more impressively, USC leads the nearest team (TCU) by half a yard in yards allowed per play. Some people may call out the Trojan D on a weak strength of schedule, but the fact of the matter is that SC's SOS is comparable to the top teams in the BCS. Averaging the SOS rankings across Sagarin, Anderson-Hester, Colley, and Massey's rankings, USC's average ranking is 43rd. This puts their schedule difficulty ahead of Alabama (48th) and Penn State (66th), two teams that regulalry get their defense hyped in the media. It makes you wonder what happened, as Oregon State is the only team to gain more than 240 yards of total offense so far this season. Best Ever though? Let's wait till the end of the season before we make that judgement.

3.) Should USC go undefeated from here on out, should USC be a title contender?

You will have to pardon me if I get a little philosophical here, but here goes. What happened to pollsters voting for who they actually think is the best team? Right now it seems like they (or at least the ones who publish their thoughts) try to rationalize their choices by wins and losses and other impressions but then will invalidate those same self imposed rules under completely arbitrary circumstances. Listen, mathematical models decide who is best based off of formulas, initial conditions, and rigidly defined rule sets, not people. The BCS already includes this aspect via the computers, so why do voters want to emulate a computer with a their own self imposed rules and regulations on how to vote and rank teams? So I will end with this thought, on a neutral field, how many teams in the country would you favor to beat USC right now?

4.) If Cal could choose one USC player to not play in this week's game, who would you hope they didn't pick? Why?

Taylor Mays, because he can literally (and regularly does) take the opposing teams best players out of the game. See exhibits A, B, and C (sorry, that last one was Kevin Ellison, but I couldn't resist).

5.) Word on the street is that your stable of 5 star RBs are getting tired of this musical starter dealio. Any chance some of them are going to transfer out?

Look at where stud backups end up in the NFL. OLB Thomas Williams played mostly on special teams and was taken in the 5th round. Matt Cassell is starting for the New England Patriots. McKnight, Gable, Johnson, Bradford, etc... will get to show there stuff to NFL scouts and will all likely get their shot at the big time. If they transfer they will probably end up like Emmanuel Moody down at UF. Moody saw significant playing time as a true freshman at USC but was worried about playing time, well now all he sees is garbage time. I honestly hope it works out for him, and it does not mean that none of the current Trojans will ever transfer out again, but SC's RBs should take heed before deciding to transfer out.

A big thanks to Laughing Stock for tackling these questions...

[Note by DC Trojan, 11/06/08 12:59 PM EST ] Thanks to a misunderstanding on my part, I treated the CGB questions like a quick-fire round on a quiz show, and answered accordingly. Answers to the questions that Paragon and Laughing Stock didn't choose are after the jump.

If you could choose one Cal player to not play in this week's game, who would it be and why?

Not very incisive, but Jahvid Best - because that would give the defense more room to focus on the QB and WRs. (Is he playing this weekend?)

Well since UCLA is the most exclusivest university in the whole entire world and the envy of Oxford, Cambridge, the Sorbonne, and Heidelberg, it has to be Washington State's defense.

How many points are you going to beat UCLA by?

One would be enough, but I'd prefer a three to four touchdown margin to offset the rivalry game hoodoo in the Rose Bowl.

How much do you miss Karl Dorrell?

A great deal. He was a class act who really paid attention to the student part of "student athlete," and his never say go for it never say die punt to win coaching style was an inspiration.

How many points are you going to beat Cal by?

One would be enough. Realistically, I think the most SC could win by would be 2 TDs, and that's if the defense is having a good day and the offense actually gets it together. But, and I realize this drives CGB crazy, nothing's guaranteed.

There have been rumors that Pete Carroll wants the 49ers to offer him the head coaching position. If Pete Carroll leaves, will the Southern Cal program sink back into the ranks of the Pac-10?

If he takes the 49ers job, he's off his head. Whether his departure would lead to disaster depends on whether they promote from within or go elsewhere - I just don't see Sarkisian or Holt as being ready for the head coach position.

I've heard USC fans aren't exactly thrilled with the looks of this year's Song Girl squad. Is that true?

I've heard that too, which baffles me - maybe it's the quiet desperation of a middle aged married guy, but I think they look pretty good. Wouldn't kick them out of bed for eating crackers, etc.

If you could choose Cal's starting QB for this week's game, who would it be? Why?

Having read some of the back and forth about Riley and Longshore on California Golden Blogs, I don't care which of them starts as long as Longshore's on the field in the fourth quarter.

Which team among Cal, Oregon State, UCLA, and Notre Dame, do you think is more of a threat to USC year in and year out (since Carroll has been at USC)? Why?

The numbers say that Notre Dame is no kind of threat at all, and UCLA close to them. Statistically speaking, Cal plays SC close because of the relative strengths of the teams, but the W / L column doesn't show the Bears as a winning threat year in and out. So, Oregon State is the year-to-year threat. Mike Riley seems to have SC's number, which I attribute to the relative predictability of SC's offense and Oregon State's willingness to get in SC's collective grill and throw them off their game.

It's a little known fact that our band used to be directed by Philip Glass.

USC's long had a good defense, but I just noticed that your defense has given up more than 10 points just once(!) this year. Seriously?? Have you just played against some terrible offenses, or is the Trojan's defense just *that* good?

It's a bit of both. Washington and Washington State were atrocious, Ohio State merely unimaginative. But that said, and even allowing for my sense that I've seen smarter defenses at SC, this year's version really seems to have cracked defending the run *and* the pass on most plays, and they hit *hard.* I don't know if they're the best from an aesthetic standpoint, but they are smothering.

What did USC learn from its loss to OSU that will help it against Cal this Saturday?

What is the #1 offensive player on USC Cal fans should know more about?

There aren't many secrets here, but every QB has a preferred receiver and in the case of Mark Sanchez it's Damian Williams. Also, I haven't taken the time to quantify it, but the coaches finally seem to have cracked how to use Patrick Turner on simple slant routs for a first down and mismatches for short yardage TDs.

What is the #1 defensive player on USC Cal fans should know more about?

Cary Harris - just because he's a backup, doesn't mean he can be victimized, and Clay Matthews at LB / DE - a bit of a risk, because he's got that Icelandic-saga-berserker thing going, but good lord that guy gets penetration and tackles.

What is it like to be a fan of the most hated team in the Pac10?

I feel great, actually, because I balance out my karma supporting Scotland and Partick Thistle in soccer. Besides, regression to the mean will catch up with USC eventually - you can't beat mathematics. So I'm enjoying this as long as it lasts.

Do you think that USC fans deal well with the expectations for the team or are too focused on National Championship Game or Bust?

I can't answer that because I'm too far away - there just aren't that many east coast fans, and most of my friends from SC are like me and participate in the reality-based college football community. My sense is that younger fans expect far more than the team is likely to deliver because they don't remember John Robinson 2.0 or the Hackett years, but that could also be because they are a bunch of little ingrates who never had to work a day and need to stay the hell off my lawn.