It's good to be the King.  King of the Roundtable!  I went up to those Conquest Chronicle guys this week and said "You.  5 Questions.  Now.  Also, let us win on Saturday."  They gave us the first part ASAP!

Haven't heard back on the second, but I have to assume it'll be just as easy as getting those five questions.  I just have to!

Getting people to do what I want is not difficult.  It's about having the right kind of leverage.  If somebody doesn't do what I say I threaten them.  I say I'll send HydroTech over to their house with a 6,000 word essay on how amazing Nate Longshore is when he throws a ball out of bounds. 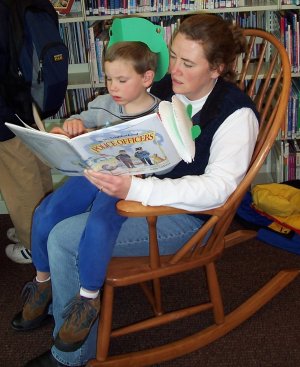 "HydroTech reads "Yes, Virginia, there is a Nate Longshore" to Jake at Building The Dam via www.grpl.org"

That works on everybody except for HydroTech.  Since I can't sic him on himself, getting him to do what I want is markedly more difficult.  Luckily for me, I'm Nate Longshore.  So, yknow, it works out.

1. Things are starting to shake out in the conference with USC, Oregon St and Cal all in the hunt for the Pac-10 crown. What has surprised you so far this season within the conference and make a prediction on how you think it will shake out.

Oregon State now plays the tough part of its schedule with games against Cal, UCLA, Arizona, and Oregon.  With the relatively mediocre showing by Oregon State thus far this season, I wouldn't be surprised if they split the 4 games.

I don't think Oregon State is going to make the Rose Bowl.  I think they'll be lucky to make the Holiday Bowl.

Maybe I'll eat my words if Cal loses to Oregon State, but I think the Pac-10 crown is still between Cal and USC.  In the end, I think USC goes to the Rose, Cal goes to the Holiday Bowl, and Oregon State loses two out of its final four.

2. Recently there has been a lot of talk over the possibility of a Pac 12. Say that when Tom Hansen steps down as Pac 10 commissioner that the conference decides it is time to expand. Which teams should the conference go after and how would you split the teams into divisions? If you disagree that the conference should expand, would you change out any teams? If so, who and why?

I know one of our community members, carp, has been all over this, but I'm not sure I would agree with the idea of expanding to 12 teams.  I like that each team plays all nine other members of the conference every year, and that's just not possible with a 12 team conference unless the Pac-12 went to one non-conference game.  That'd be a little xtreme.

That said, if it were necessary to expand, I would venture to guess that in order to preserve the same kind of system currently in place (essentially five pairs of schools), the only schools I can imagine being under serious consideration would be Utah/BYU (95% chance), (4% chance) Idaho/Boise State, or Nevada/UNLV (1%).  Actually, it would probably be 99.9% for Utah/BYU because the others don't have a sterling academic reputation.  I would guess the alignment would look something like

3. Along those lines. The pundits and talking heads continue to bash the Pac-10 because of the supposed weakness of the conference yet we schedule some of the toughest out of conference games in the country. Ted Miller of ESPN recently said that the Pac-10 should re-think its ambitious scheduling in favor of scheduling patsies for our OOC schedules like conferences do. Explain why you agree or disagree with Millers take and what solution do you have, if any.

Let's look at this from a different point of view.  Arguing over these sort of conference v. conference things is inane and serves no real purpose.  People will argue it until they are blue in their face and it only affects a few things.  If you are trying to get into the National Championship game and if you are trying to get 2 of your conference's teams into the BCS.  These days, Cal isn't really looking at a BCS game unless they win the Pac10. Meaning that it don't matter much what people in Maryland or Colorado think about Cal.

So, look at it this way.  You are a paying customer of your team.  You buy tickets.  You want to enjoy a great product.  What is better? Those smackdowns on Portland State/Sacramento State?  Or taking on teams like Tennessee, Michigan State, Virginia, Ohio State?  It's not even close.  I don't care that we just elected Comrade Osama Bin Lohan, this is a capitalism and you want the best available product for your money.

4. Is it just me or are the games being played faster? The NCAA continues to tinker with the clock and their excuse is that they are trying to make the games more exciting. Have the new rules made the game more interesting or have they once again hurt the product?

The games do not seem to be playing faster.  I think it has to do with better TV options for Cal.  Many of our games have been on ABC this year and that is the absolute worst.  They have TV time outs ALL the time.  Maybe if there were last year's time rules, it would be even worse.  I don't know.  But ABC's TV time outs seem worse than ever this year.  Especially earlier in the game, because if things get out of hand ABC knows itll have fewer viewers in the second half.  Very frustrating there.

5. It's Cal week for us so in the spirit of fun tell us your best/funniest Cal Game story…for you CGB guys pick a team!

Well, its Cal Week every week for us. So, let's just go with that.  Here's a funny Cal story.

Each year, during the Big Game, Rally Comm (Cal's spirit committee) sets up camp at major Cal locations to protect against Stanford invaders.  Honestly, I think more Cal fans go to Stanford for pranks than vice versa, but that doesn't stop Rally Comm.  So, right before the 2002 Big Game, we decided to play a prank on Rally Comm.

One of the band members played the carillon (the bells played in the large clock tower on campus), so he had all the necessary keys.  So, at about 6 PM or so, he entered the Campanile (the large clock tower on campus).  Rally Comm had yet to set up.  He did work and studied etc etc etc.  That was the Thursday night before Big Game, so he had to miss the Big Freeze.  But we texted him updates.

He brought a CD boombox and the CD only had 2 songs on it, All Right Now (Stanford fight song) and Fight For California (Caliornia Fight Song).  After the Big Ice, many of us met on campus to prepare for that evening.  By that point, Rally Comm had a large protection squad outside the Campanile.  We wore blue Cal shirts with red shirts over them.  I'd say there were several dozen of us.  Breaking up into small groups, we all wandered aimlessly through campus as we made our way to that a building right next to the Campanile.  We all regrouped there and prepared water balloons.

Then, at the specified moment, our friend in the clock tower, started BLASTING All Right Now from inside the Campanile while the mass of red-shirted people started flowing out and around the Campanile.  We threw the water balloons at the ground to make it seem like Rally Comm was under attack.  Eventually, he switched over to Fight and we took off the red shirts to show our Cal fandom.

But pranking Rally Comm was one of my favorite memories at Cal.  Those spirited bastards!  How dare they promote Cal spirit!!!

Also, CougCenter has put together our Top10 Pac10 votes.  Much thanks to CougCenter!  Here they are.  What's your Pac10 Top10?