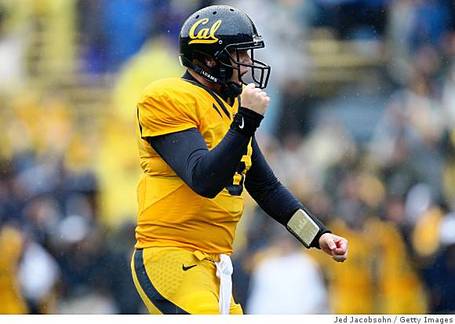 It seems like we made errors left and right - yet we still won.

When most people make so many errors and still win, they probably smile at the insane amount of luck they were blessed with. But I feel like today, despite all the errors, we won because the team willed the win with hard tough solid play despite the conditions.

Duck QBs were 11/32 with 2 INTs. They averaged a pop-warner 2.6 yards per pass. That is horrible. I mean, absolutely horrible. Offensive coordinators will get fired for having a 5.0 yards per pass attempt average. But 2.6 yards per pass??? Granted, the rain had an effect... but Cal's defense clearly played the pass pretty well.

On the down side, Oregon's two Jeremiahs averaged 5.9 and 4.6 yards per rush (Duck RB Jeremiah Johnson averaged the former; Duck QB Jeremiah Masoli averaged the latter). If you take away both of their longest runs (only 19 and 21 yards respectively) they averaged about 5.0 and 3.5 yards per carry respectively. The former is decent, and the latter is sub-par. Thus, it appears, statistically at least, that the defense did a bad job containing Johnson on the zone reads, but a good job containing Masoli on the zone reads.

But for the most part, the defense played pretty well and kept Cal in the game. Aside from Oregon's first scoring touchdown drive, and the 3rd quarter, Cal's D was fairly dominant.

Mike Mohammed had a whopping 14 tackles (10 solo!). Pain Train (toot! toot!) had 11 tackles (8 solos!). Pain Train also had 3 tackles for a loss and a sack. Nobody stops the Pain Train. And hello D-Hag (Darian Hagan) with 3 pass breakups.

I mean, I get it. I know you're a competitor and you want to get that extra one yard, but it's not worth a concussion. Slide, and get up to fight another play.

Riley had already ran for the first down and it's not like it was a game-ending situation where he had to score or the team would lose, so he should have slid.

Once you sustain your first concussion, you're like twice as likely to get another one later on (something like that).

As for the run game, as I said earlier, Best and Vereen were only able to average around 3.0 and 2.0 yards per carry respectively (ignoring both of their single large runs). That's not that great. Once again, the rain had an effect so we have to sort of temper the expectations a bit, but still... not great.

As for pass protection, well, we all saw Longshore get destroyed from behind but aside from that one the pass protection was actually pretty good. The OL only let up one sack, and only one QB hit. Not too bad for a bunch of young guys without extensive starting experience. 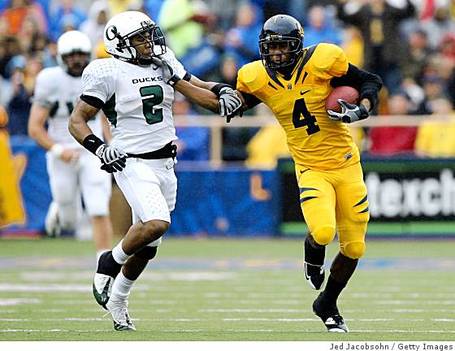 Okay, I know this whole QB controversy has been taking a toll on the fan base. I think we're all a bit tired from battling it out over our favorite QB (Riley sucks!!! Longshore is the greatest QB EVAIR!!!), but thank goodness we have two quality QBs. Well, I know some of us would debate whether Longshore is a "quality" QB (cough cough Olsonist) but at least he's not Kevin Craft. I mean, we're all sane enough to rather have Longshore instead of Craft, right? Right???

Back to my point, as Tedford has said, having two starting QBs on roster is a luxury and it really proved to be a luxury today.

Like Longshore or not, we might need him next week against U$C since Riley could be questionable from his concussion.

After weeks of seeing nothing by the dropsies, they started plucking balls out of the air including some key sideline and 3rd down catches to move the chains! I think there were perhaps only two instances where the balls slipped through waiting hands.

Let's get straight to it. Last week, the concensus appeared to be that I gave an overly generous grade to Riley last week. This week, after careful consideration, I think Longshore deserves an "A".

He was less than 50% today (13/27) with a lowly 5.0 yards per attempt. But considering the rainy conditions, today's performance is essentially a Peyton Manning-esque performance and clearly cements his position as the starter against USC.

Longshore converted some crucial 3rd down throws, along with that 4th and a mile throw. He didn't throw any INTs, and could clearly be seen going through his progressions (oh noes!!!). At least, from the student section I could clearly see him checking the field on multiple different passing plays. Overall, considering the field was essentially an Olympic sized pool for half the game and a few balls went through the WRs' hands like they were still ghosts for Halloween, Longshore did pretty well.

So like I said, today's performance clearly cements Longshore as the starting QB for U$C.

As clear as muddy water. 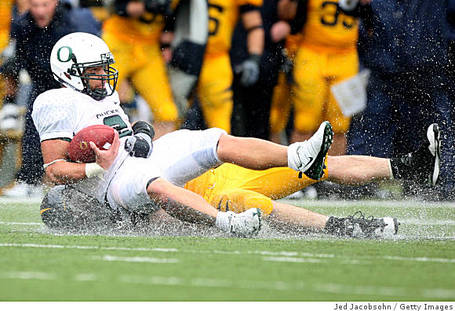 Well, props to the fans who decided to come and stick it out. I think some people left at half time which was kind of lame although at the same time, I can somewhat sympathize if they didn't have a poncho.

The crowd noise sounded fairly loud considering there were only perhaps 40k people in the stadium.

The mic-men did pretty well today. They kept the students going through Oregon's no-huddle offense and were very smart to keep the rest of the stadium very involved too.

Although, I still wish the mic-men would stop the whole "Give me a C!!! No no no, louder, blah blah blah, we need to be louder, that's a lame 'C'..." That just plain annoys me.

The players seemed very aware of the crowd today. Many times I saw the players (especially in the fourth quarter) turn around and motion to the crowd to pick up the noise. I'm not sure if this is because the crowd wasn't as noisy as usual due to the smaller numbers, or if because the players thought this was a crucial moment in the game. But I think the players should continue - or if they haven't been then they should - be more active in getting the crowd involved. Let's be honest here, not all the mic-men have the respect of the students. Few can actually get the students to be loud on command. Furthermore, not everyone in the stands is paying attention to the mic-men or the student section. But most people are watching the players on the field or sidelines. If the players on the field and sidelines take more of an active part in interacting with the crowd and getting the crowd to be loud, it would be beneficial to the team. Not only would the crowd be louder, but it would help train the crowd to be louder more often.

That being said, it was cool to see Riley pump up the student section after being taken off the field. It was also cool to see Follett run over to the offensive huddle on the field during a timeout to pump them up and encourage them to score after the defense forced Oregon to punt. The last time I saw a player do what Follett did was Lavelle Hawkins during the U$C game last year (2007). In the fourth quarter, he was standing by former DB Coach Littlejohn (who was signaling in the play to the defense) so the defensive players would see him and yelling encouragment to get the stop so the offense could get one last shot. 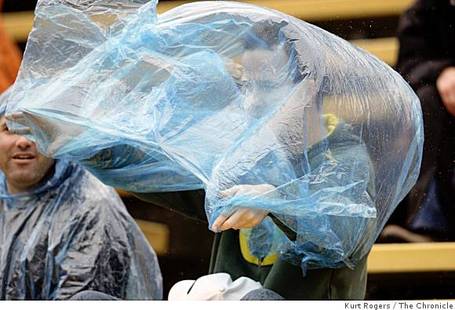 Typical rain gameplan. Try to run early. We tried. Oregon was bringing down their SS into the box. We phailed.

Then we started passing, and did you notice Oregon started respecting the pass? They kept two safeties back. On passing situations, they played cover 3.

The Ducks become more balanced on defense when they began to realize that we weren't just going to run all day long because it was raining. Consider, we passed 39 times today! 39 times!!! Typically we'll pass around 20-30 times in most (normal) games. But 39 times in ridiculously rainy weather while the field was a pool? Cignetti said: "respect the pass, Oregon." And they did.

Typical Gregory gameplan against Oregon. Assignment football. Man coverages on ambiguous downs (downs where the offense can run or pass) for the most part to defend the zone read. Zones coverages on passing downs.

Masoli had a few plays where he had some 1 on 1 coverages down the field but continuously checked down to shorter options. I was surprised. I know on one instance, Oregon was driving south and Masoli had been flushed from the pocket and was rolling East. He had an open WR 25 yards down field along the sideline in a crease (seams of zone coverages), seemed to see the WR, yet checked down to a 5 yard route. Not sure what was going on there. On another instance, an Oregon WR split Cal's two deep safeties down the middle and was wide open, yet Masoli checked down again.

Gotta hand it to Gregory for putting together a solid gameplan. I'll have to check to see what was going wrong in the 3rd quarter, but other than that, Gregory gets props from me.

Okay, I was kidding about the "A" grade. Olsonist and CaliSeth can stop being mad now.

I think a "B" is fair. Certainly, Longshore wasn't OMG SPECTACULAR BEST QB EVAIR!!! But considering the circumstances, he did fairly well.

As I said earlier, there were a few drops. There looked to be a few throws that perhaps got away from him (slipped out of his hand). He didn't throw any INTs - although Oregon defenders certainly got their hands on at least two balls partly because the balls were (purposely) thrown high and partly because the WRs didn't go up for the ball.

He threw some great strikes for crucial 3rd and the 4th down conversion... not too shabby for a QB whom so many of us have given up on.

Penalties. We had 9 penalties for 85 yards. That's essentially a touchdown or at least a field goal off of our penalties.

You can bet the team is going to get punishment up-downs (punishment exercise) for every yard of personal foul yardage.

Every small mistake, no matter how small, can't happen.

Just look at Oregon. At one point in the game they were knocking on our endzone door with a 3rd and 1 from like the 5 yard line, but got a false start which put them at 3rd and 6. They failed to convert, and settled for a field goal - or so they thought (they missed the field goal). One small false start can absolutely KILL a drive. We can't have false starts. We can't have illegal ball snap/infractions or whatever they're called.

No personal fouls. No pass interference.

To beat USC we have to play perfectly. USC has been penalized a fair amount this season. If we let them make the mistakes, the game will be winnable. If we start making mistakes. We lose. 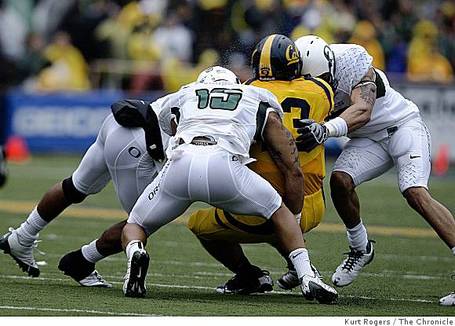 The key to us winning is in passing the ball.

Our OL is inconsistent when it comes to run blocking yet it's still probably the "strength" of our offense if you can consider it a strength. But defenses will continue to stack the box and force us to pass - so we have to pass to keep defenses honest.

If we can win games by just running, well that's just dandy but how often is that going to happen outside of playing WSU? Not that often. Not against USC that's for sure.

We're going to need a balanced offense from here on out to win these tough games. We'll need the OL to open up bigger rushing holes more consistently.

If our offense starts playing at a level we've come to expect from previous years' offenses, we'll take three of the next four games and perhaps all four.