Share All sharing options for: Reveling in BIG GAME Victory 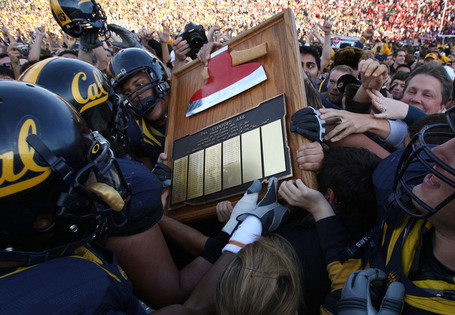 I feel good. As a faux-journalist blogger, it is my duty to analyze the results somewhat objectively, noting the positives (what a third quarter!) and the negatives (ALAMAR!). It's also in my critical and pessimistic nature to never be quite happy - there is always some problem or looming issue to temper a good moment. But right now, I simply feel good. I know the season hasn't gone as we had hoped (though it has gone pretty much as we expected), but, as a Cal fan, if you can't be happy after a 21 point Big Game victory, you're not going to be happy very often.

At first I was a little annoyed that we were rushing the field - we're an 8 point favorite at home against a 5-6 team, and I feel like we should act like we've been there before. But then I saw students mobbing the axe, and if the axe is as important as the players have said all week, then why shouldn't we revel a bit in winning it back? I took to the field and meandered about the students, just trying to enjoy the moment.

I saw Sean Young and asked him if he was happy he came back for his sixth year; he said "Yes," with a huge smile, and I congratulated him on winning Big Game in his final year. Near the north end zone, I found Anthony Felder; Anthony and I are both from the great state of Washington, and when I was still in school, we were often on the same flight or in the Seattle airport at the same time. He was always a great guy when I spoke with him, and he recognized me when I said hi on the field. I thanked him for his (still not finished) great career at Cal, and he smiled before continuing to sign autographs for a horde of kids. I found a group of senior bandsmen on the field, disregarding the order to stay in the stands so they could soak up the moment in their final Big Game. Now I'm listening to them play "Fight" from my office, and I'm getting chills remembering my last Big Game as a student. It doesn't really matter that we were expected to win against a pretty mediocre team; getting the axe back, no matter what the circumstances, is always a reason to celebrate. 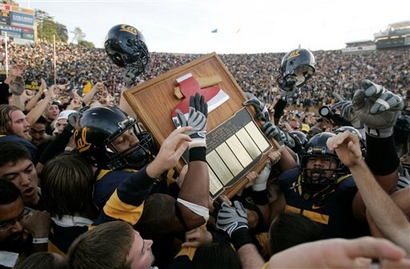 Things were pretty tense at half. Though we held a 10-3 lead, Standford had around 200 yards of offense and was controlling the game. A gorgeous pass from Riley to Vereen and a great goal line stand (and who got the penetration on 3rd down at the 1 to stop Gerhart for a 2 yard loss? Syd'Boner, that's who.) at the end of the half gave us the lead, but it did not feel secure. We were fortunate to hold a 7 point lead, and a repeat of the first half would give Stanford a great shot to win the game. Then the Bears decided to play their best quarter of the entire season.

I wish Tedford could bottle up whatever it is he said to the team at halftime, because I've never seen Cal come out like that from the break. Stanford did their part to help; Pritchard's first pass, across his body while fading away, was a terrible decision. Stanford's game plan is very clear - run the ball and throw it underneath, in an attempt to control the clock and win a close game. If you're going to be successful with this type of plan, you absolutely cannot make stupid mistakes that put you in a big hole and force you to play catch up. In one play, Pritchard undermined the plan and irrevocably changed the game. It was all Bears for the next 15 minutes, and by the time Stanford recovered they were down 37-3. 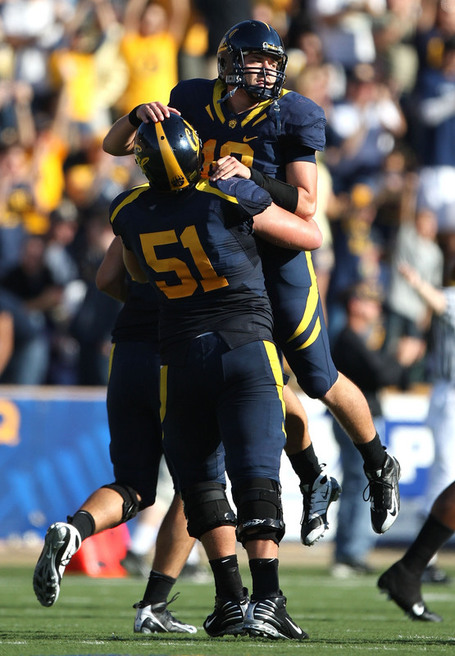 What a quarter. According to our poll at the start of the fourth, 66% of respondents described Cal's play as "excellent." For such a pessimistic and snake bitten fan base, I think that's the best we're ever going to get. We scored on 3 straight possessions, and each of our plays seemed more effective than the last. The fake to the fullback-reverse pitch would have gone for the touchdown (glad that play is back after a long hiatus, I've missed it), but the mis-direction to Morrah was even better. It reminded me of the touchdown pass to Stevens to open the '06 Oregon game - Cal had everyone flowing one way, the QB (Nasty Nate then, Riley know), did a great job looking off the defenders, and our TE was all alone with half of the endzone to spare. The hardest part must have been the catch - the throw took some time to get across the whole field, and everyone in the stands started yelling before the ball arrived. Good job by Morrah to bring it in securely.

The next two defensive possessions were remarkably similar, and remarkably awesome: one run for one yard, one incomplete pass, and one sack on third and nine. We scored touchdowns following both, had a great double reverse to Ross, and the UNBELIEVABLE hook and ladder to Jahvid. I saw the defenders collapsing on Tucker before the ball arrived and started cursing another poorly executed screen. Then Jahvid turns the corner out of nowhere and I go from disillusioned to ecstatic in record time. Great design, impeccable execution. By the time we got around to running a simple draw at the start of the fourth quarter, Stanford was so flat footed and demoralized that Best made the 45 yard TD run look easy. 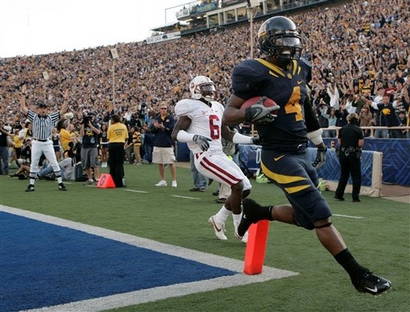 It had been reported all week that Best was as healthy as he had been in several weeks. It showed. He was stopped on two terrible swing passes for 5-8 yard losses before breaking tackles and turning them into huge gains. He had great acceleration and didn't lose speed while turning corners on sweeps and tosses - I don't think it was by accident that we were running almost exclusively to the outside for much of the game. By my count, all of our wide receivers COMBINED had 1 catch for zero yards (it was a quick flare to Boateng on a 3rd and 2 in the 4th quarter. You could also count a reception for Tucker on the aforementioned hook and ladder, but I'd give the yards to Best). When you receiving corps has literally receiving zero yards, you better have some damn good running backs. We do, and if you wanted proof, you could have watched Best all game and Vereen on the fade TD. 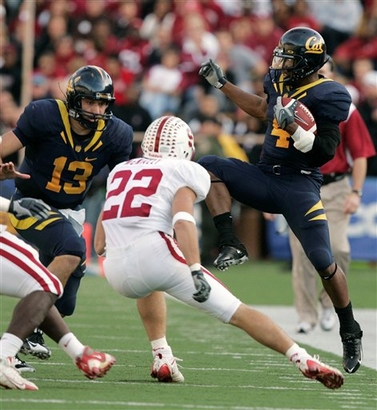 I've been one to say that we could be better on defense next year, due to the fact that everyone in the secondary and on the line is coming back and we have capable people in place at LB. Eddie Young and the Prophet Mohamed both came up with huge interceptions and they'll be expected to lead the group next year. They're great players and they've already produced a lot. But just as some fans discounted the loss of our great receiving trio from last year, we need to remember that we're losing 3 huge contributors at linebacker and we'll have some growing pains next year. Follett was simply unstoppable in the second half - he's a passionate guy and he did not want to leave Cal without the axe. By my count he was in on 3 sacks in the second half. We're going to miss him in particular, as well as Felder's solid tackling and sound positioning.

But there is plenty of time for worrying and hand wringing about our linebackers in the off season (though a bit less if all-everything OLB recruit Devon Kennard ends up at Cal - he was at the game today and you have to think he liked what he saw from Follett). There's also plenty of time to discuss the bizarre officiating today, from 1 and very nearly 2 blocked passes, to the bounce-catch that everyone in the stadium knew hit the ground which was somehow upheld! (The replay official should have just watched the play on the Jumbotron). For now, let's simply celebrate a great Big Game win, the return of the axe to its rightful home, and a coach that has guided us to six Big Game victories in seven tries. 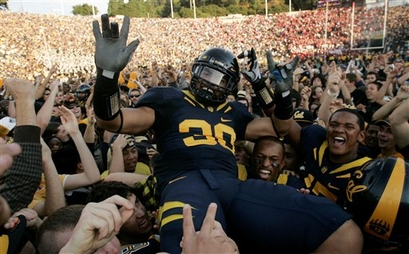