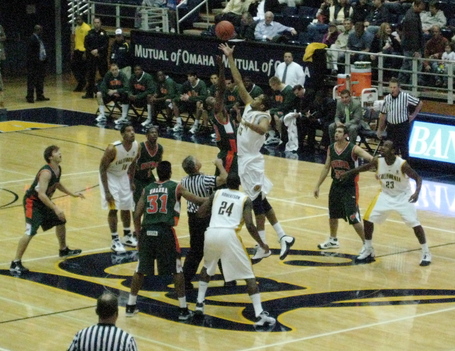 The Bears controlled this game almost from the opening tip.

Sometimes you can learn a lot from watching a 30-point blowout; I'm sure of it.  Thursday night was not one of those times.

Instead, I witnessed the first round of the hideously non-descriptively-named "Global Sports Classic", a marketing debacle if ever there was one.  I have no idea what is 'global' about this tournament, unless you take the Bears' opponent's name, 'Texas Pan-American', literally, and calling the first edition of something 'classic' is just a wee bit pretentious, don't you think?  Moreover, the name of the tournament doesn't even imply basketball; "Global Sports Classic" could just as easily apply to a croquet club tournament in Duluth, MN, as it could to this bizarre manifestation of a college basketball tournament.

Moreover, I'm not even sure how these games work in the tournament.  To guarantee TV ratings, I'm assuming, the tourney places the Bears directly into the final four of this tournament in Las Vegas with UNLV, Cincinnati, and Florida State, regardless of whether they win their first two games, last night's match vs. Texas Pan-American, and Monday night's tune-up vs. North Carolina A&T.  Those two teams, plus two others (Coastal Carolina and Western Illinois) play the part of cannon fodder for two of the major teams each, and then are seeded directly in the "loser's bracket" regardless of whether they actually win one of these games or not.  It's like these games don't even matter.

Anyway, enough ranting.  UTPA (say "Opah!" in a loud and cheerful Greek accent) did manage to keep the game close for a little bit, holding leads of 6-2 and 11-8 before a 19-3 run by the Bears burried the Broncos and essentially ended the game before the half.  It was painfully obvious that UTPA was no match for the Bears in any sense of the word, and the only suspense was whether Cal would let up and keep the Broncos in the game, or press their advantage and really put this game beyond reach.  Thankfully, it was the latter. 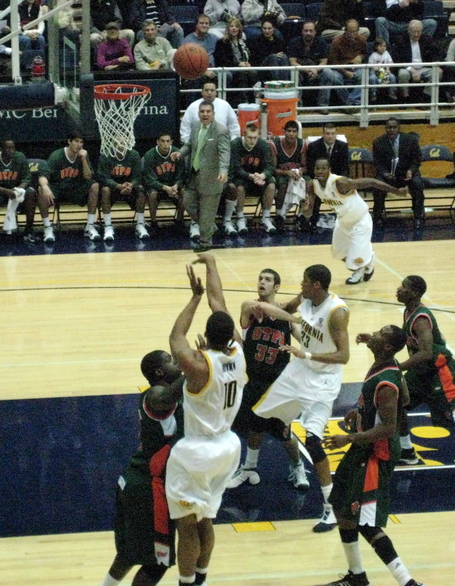 Though obviously you never want to read too much into a 27-point victory over a massively outgunned opponent, I did see a few encouraging signs:

• Other than the first few minutes, the Bears really got after it on defense.  We saw almost none of the lazing around with a 10-point lead that marked the victories over Pacific and San Francisco.  9 steals by 7 different players makes for a lot of easy points.

• Speaking of getting after it, I really liked it when, in the middle of the first half, the Bears began applying full-court pressure.  I'm not sure why Monty went to the press against UTPA -- perhaps something in the matchup suggested it would work.  Nevertheless, it clearly harassed the Broncos and even led to a couple turnovers.

• Also regarding pressure, the Bears forced at least two shot-clock violations from UTPA, both times to due to 35 seconds of relentless, tiring defense.  The Bears are by no means perfect defensively, but I think the improvement from the first game to this (the third) is definitely noticeable.

• Montgomery was finally able to empty his bench, getting everyone in on the action, including D.J. Seeley, who saw his first mintues as a Bear.  Theo Robertson went to the bench with about 8 minutes to go, and he was the last starter still playing last night.

• Yes, the competition was suspect, but 23 assists to 11 turnovers is an encouraging statistic regardless of the opponent.

It's also quickly becoming apparent that Max Zhang is going to be a fan favorite.  And why not?  Sure, he's still a work in progress, but he also does things on the court that no one else can, blocking shots without jumping and drastically altering or discouraging the shots he doesn't get to.

However, due to the lopsided score, Max also got more action than he's seen before, and he responded by fouling out after just 8 minutes played.

Also discouraging:  despite having the two tallest people in the building, the Bears were outrebounded 19-20, including giving up 12 offensive rebounds.  Gotta do better than that, Bears.

For haltime entertainment, the Bears were treated to a demonstration from Cal's No. 7 women's volleyball team, stumping for more fans to make it out to their weekend matches with UCLA and USC.  Indeed, the match vs. No. 9 UCLA should begin just about as this gets posted (5PM Friday). 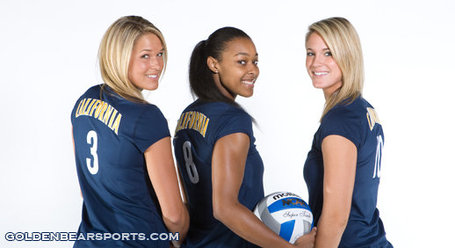 Anyway, I took a few photos of the halftime entertainment.  Danzig, these are for you: 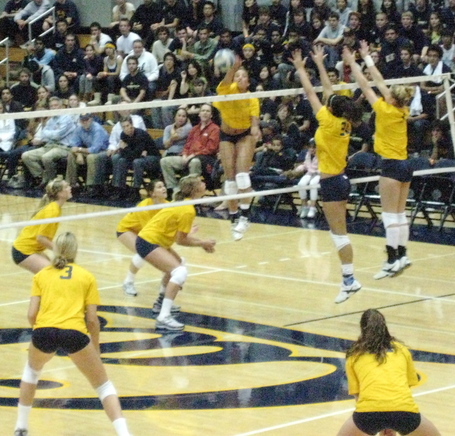 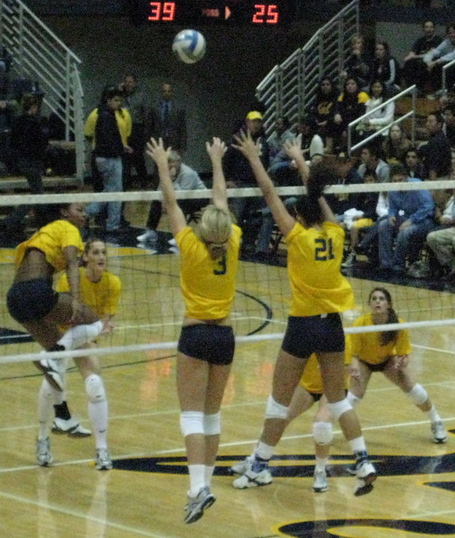 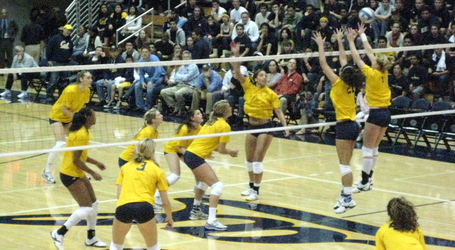 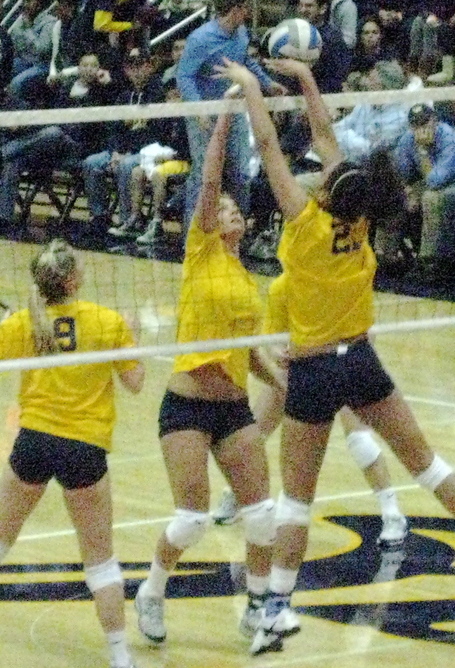 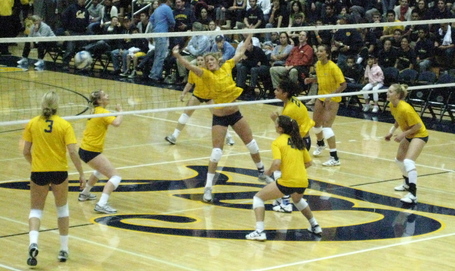 I also took a couple minutes of video, just so you can get a better feel of what the action is like.  Enjoy!