Share All sharing options for: Fantasy Week in Review - Week 12 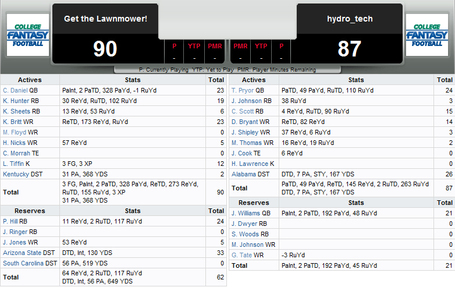 In the most epic College Fantasy Football Championship game in the past 50 years Get the Lawnmower! proved that the plastic bottles, water, and sticky Gatorade residue are no match for the whirring sharp rotary blades of a lawnmower.

With only two seconds remaining on the clock and the game tied at 87, Get the Lawnmower! kicker Leigh Tiffin split the uprights from 43 yards out as time expired to finalize the surprising nail-biter that nobody was predicting.

"Oh yeah, we heard the newspapers doubting us all last week," said Get the Lawnmower! QB Chase Daniels.  "Frankly, that was a bunch of b---s---.  We knew we were the better team all along."

Contrary to Daniels' thoughts the fan consensus was that team hydro_tech was more talented and  would easily win.

Many college fantasy football gurus deemed team hydro_tech as one of the most dominant teams in the past 20 years.

"If they were so dominant, then why did they lose 61-102 to Maharg back in week three?"  asked Daniels.  "Team Maharg is freakin' useless.  I don't think Maharg even started a full team when he beat hydro_tech!"

"Does anyone remember that team hydro_tech didn't win three games this season?"  Get the Lawnmower! RB Kendall Hunter added.  "Team hydro_tech is crap!  Them dudes lost to Boller Believers! in week 6, and tied the Golden Zigers in week 9.  If they were so good they would have won those games, right?"

Coach Fever agrees with his players' sentiment.  "Yeah, we heard Coach HydroTech was talking crap all week prior to the game.  I thought it was funny because he obviously didn't know his team wasn't that good.  The dude skewered himself."

In the losers' locker room, the mood was very somber and at times scary.

hydro_tech runningback Jeremiah Johnson could be heard throwing water bottles across the room and loudly cursing his poor performance.  Johnson only managed 38 rushing yards in a hugely disappointing performance.

But it appears as if Johnson wasn't the only one that didn't bring his A-game.  hydro_tech WRs Jordan Shipley and Mike Thomas combined for only 53 receiving yards and 25 rushing yards on the day.

"We really couldn't get into a rhythm," said Shipley, "Get the Lawnmower!'s Kentucky defense kept jamming us at the line and throwing off our timing."

Mike Thomas had other reasons for their poor performance.

"I'm gonna kill me some refs, blood!"  screamed Mike Thomas to nobody in particular as he walked to the locker room after the defeat.  When later asked to clarify what he meant Thomas explained that the refs were missing obvious defensive holding calls.  "Them refs were whack, blood.  I was getting held every play.  Get the Lawnmower! knows we're better than them so they had to result to cheating to win the game!  That's despicable."

When Coach HydroTech was asked to comment on the refs he had nothing to say.

"I just don't want to get fined by the NCAA so I'm not going to say anything," said HydroTech.  "I'm too busy trying to figure out what the hell happened to our kicker Hunter Lawrence."

Indeed, Hunter Lawrence's performance this championship was non-contributory.  In fact, he didn't even show up at the stadium to play for the game.  Coach HydroTech was frantically calling Lawrence's cell phone minutes before the game to determine Lawrence's status but Lawrence never answered nor could be found by friends or family.

"I have no idea where he went," said hydro_tech runningback Charles Scott.  "The guy is a flake.  This doesn't surprise me.  I saw him at the hotel the last night.  This morning he just couldn't be found.  Plain and simple, he's just not a team player.  If he had showed up to play today and scored only 4 points for us then we would have won.  This loss falls squarely on his shoulders."

Scott's analysis seems fair.  Team hydro_tech seemed poised to win the game.  hydro_tech's Alabama defense was able to shut down Get the Lawnmower! tight end Cameron Morrah, and wide receiver Michael Floyd.  Both players did not catch a single pass.  Not every day does a defense shut down one of the most dangerous receiving tight ends in the game on the same day that one of the most dangerous wide receivers also gets shut out.

Team Get the Lawnmower! was not sympathetic.

"Yeah, payback's a bitch, ain't it?  After they beat us in the regular season and after all the @#% talking that they were doing the entire week prior to this game, they got what they deserved," said Get the Lawnmower! wide receiver Hakeem Nicks who had 57 receiving yards. "I don't care if one of their players didn't show up to the stadium to play the game.  This is a team game - obviously they're not a team."

Nicks is correct.  Despite the immense star power on team hydro_tech, this entire season was marred by rumors of a divisive locker room feud over whether Terrell Pryor or Juice Wiliams should be the starting quarterback.

On the other hand, team Get the Lawnmower! isn't bursting at the brim with the league's top players.  Aside from wide receiver Michael Floyd, runningback Kendall Hunter, wide receiver Julio Jones, quarterback Chase Daniel, and runningback Javon Ringer, the rest of Get the Lawnmower! is just a bunch of solid no-name players. They don't win games based on talent or ego alone.  Instead, games are won from hard work, teamwork and practice.

To assist his players gel as a team prior to such a crucial game, Coach Fever even had his team pair up with a partner to practice three-legged 40 yard dashes.

"That was the weirdest training I've ever done for a game," said Get the Lawnmower! runningback Kory Sheets, "My partner for the three-legged dashes was Kendall Hunter.  After doing those three-legged dashes, I felt strangely in tune with him.  He has a really nice silky smooth gait.  During our runs, I felt like we were one.  It was zen-like.  It was cool."

Coach Fever had little to say after masterminding his first College Fantasy Football Championship.  In fact, he didn't even shake hands with Coach HydroTech after the game.  Instead, Coach Fever jumped into a limo, drove to the airport, and boarded a flight for Puerto Rico to presumably celebrate his win.