Pete Newell, Cal's coach from 1954-1960, died on Monday at the age of 93.  He led Cal to its last national championship in 1959 and retired shortly thereafter, having beaten John Wooden's Bruin teams 8 times in a row (and without even paying his players).  In fitting irony, Tuesday's game at Haas featured the two teams he led to national titles - USF, which won the NIT in 1949, and Cal.  Cal paid tribute to Newell before the game with an announcement and video presentation, a moment of silence, and the loudest cheer of the evening.  I was sitting with an Old Blue who commented that "Newell was a great coach and an even better person."  Those that knew him speak with glowing admiration; the rest of us will have to settle for the pride in having this great man associated with our University.

This Cal team is going to live and die on its three-point shooting.  We don't have much of an inside presence (more on that later) so we're going to have to rely on Patrick Christopher, Jerome Randle, and Theo Roberston to hit outside shots.  When they're hot, we'll probably win; when they're cold, we'll almost definitely lose.  Last night, Theo was scorching, hitting 5 threes in the first half and scoring 11 straight Cal points during an early stretch.  He found a spot outside the arc about 1/3 of the way to the left baseline and started firing away - I'm pretty sure he hit all of his threes from the same location.  He ended up with 19 of Cal's 38 first half points.  In the second half, Jerome Randle took over the scoring with 21 points in last 20 minutes.  He finished with 25, 3-4 from beyond the arc. 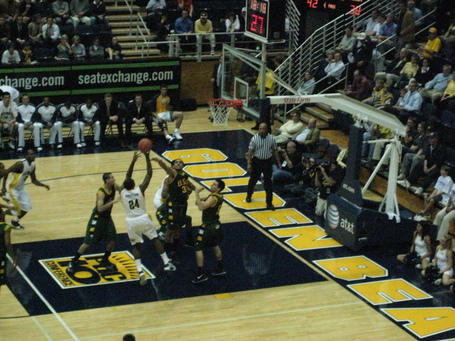 It seemed like Cal hit more than 50% of their shots, and they did - 58.3%, to be exact, and a ridiculous 8-12 on three-pointers.  Christopher was "only" 4-9, but Boykin chipped in 15 on a steady diet of mid-range jumpers.  More often than not, our victories are going to look a lot like this game.  And if you think hitting 66% of our three pointers is sustainable for 20 or so games, then you probably think we'll be a tournament team.  I don't, and I don't see much in the way of offense that's going to carry us when the outside shots aren't falling. 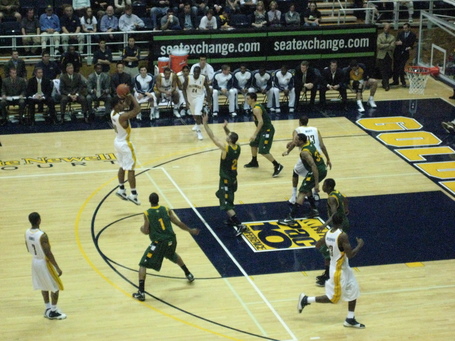 Although we shouldn't bemoan Ryan Anderson for leaving us (1st round draft pick and 15 & 17 in his first two games - looks like he made the right choice), it would be nice to have an offensive presence in the paint.  Our centers are simply physically weak; Jordan Wilkes' fist offensive offering was less of a baby hook than a fall away heave over one shoulder, and Max almost broke himself in half when he tried to reach down for a low bounce pass.  You want to beg Wilkes to go up strong around the hoop, but he looks very tentative and afraid of contact, and thus his height advantage is completely wiped out.  On the other end, Wilkes had a great (and very surprising) block that had the stunned crowd roaring.  He also gets in decent position for defensive rebounds and uses his long arms to box out opposing bigs.  We've been spoiled by Powe and Anderson, which makes the difference offensively all the more glaring.

The defensive effort from Saturday night did not exactly carry over to Tuesday - USF hit 50% from the field and 57% from beyond the arc.  The Dons were hot, but they also had a number of open shots.  Cal will definitely need to improve its defensive intensity if it wants to compete in the Pac, and Montgomery knows it: "I went in and blasted them a little bit," Montgomery said. "We made a lot of mistakes that we can't make if we're going to be a good team down the road"  Still, the building blocks are there: on a few occasions, Cal had nice weakside ball pressure in the key which led to a a few USF turnovers.  And we have photographic evidence of Cal guards defending beyond the three-point line, something I didn't think was possible last year. 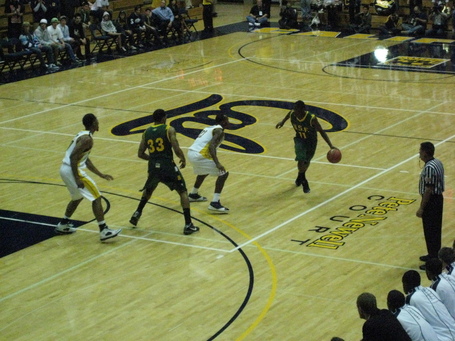 While we still love Jorge Gutierrez (he has a sweet little pull-up jumper off the dribble from the top of the key), he and Randle are prone to pretty sloppy play.  USF briefly took the lead 60-59 on about a 10-0 run, fueled by very careless mistakes by our backcourt.  Randle looked like the vintage, turnover-prone freshman version of himself when he tried to dribble through a double team (fail!) and then proceeded to lob an alley-oop to Guiterrez in the hopes that he had Patrick Christopher's vertical (he definitely doesn't).  It was an ugly stretch, and Montgomery, wanting the two of them to work through their difficulties on their own, was finally forced to call a timeout when the Dons took the lead.  Cal then proceeded to go on a 8-10 point run of their own, fueled by (you guessed it) Guiterrez and Randle.  Randle settled down, started playing within himself, and scored about 15 points in the last 8-10 minutes.  Monty had a number of choice words for Randle during the game, and how Randle handles himself, the instruction, and the criticism is going to have big implications for the team's success. 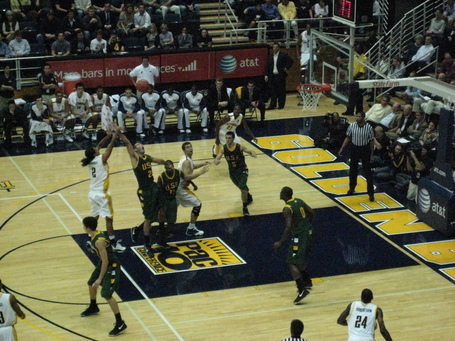 Guiterrez scores from the free-throw stripe.

The most amusing part of the game was a very animated referee; at one point, the ref pointed to a USF player, hopped on one foot for a second or two pointing at his shoe, and then made an exaggerated first down motion in the opposing direction.  I appreciated his efforts, since I often wonder what the officials see that determines the call, but I was troubled by the feeling I had seen him before.  In fact, I had; Seinfeld fans (so, Spazzy and Twist), remember George's "timeless art of seduction" and the photo-shop guy he accidentally woos?  He has resurfaced as a ref. 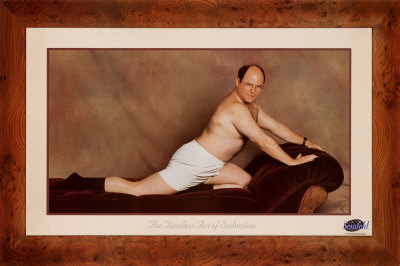 I couldn't find the other guy, so we'll just have to use this and a little imagination.

Credit to Ragnarok for the pictures, especially the last one.