Looking Back at Arizona: Cal's Cover Zero Gives up a Touchdown

Share All sharing options for: Looking Back at Arizona: Cal's Cover Zero Gives up a Touchdown

I'm sorry that this post is weeks behind the actual game.  Culinary school has been pretty busy lately.  The semester ends in a few weeks and finals are coming up in early December.  I've been fairly busy lately practicing my mincing technique and ingredient sniff tests.  But better late then never, right?

One thing which I noticed while watching the Arizona game was how disturbingly similar Arizona and Arizona State scored on our defense.

If you remember my last post, I showed how Arizona State scored against our man free coverage.

Arizona scored in a very similar manner on a passing play.  Let's take a look at how it happened. 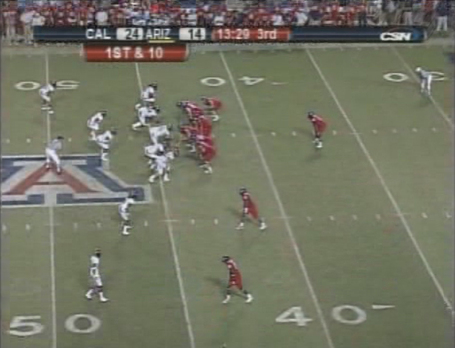 Above is the pre-snap picture.  Arizona has "12 personnel" on the field - meaning they have 2 WRs, 2 TEs, and 1 RB.  Both TEs are on the right side of the offense's OL.  One TE is on the line of scrimmage (LOS), and a second one is off the LOS.

Cal is in its typical 3-4 defense.  Cal appears to be playing man-coverage since both of Cal's CBs are lined up across from both of Arizona's WRs who are lined up as twins to the same side of the Arizona offense. 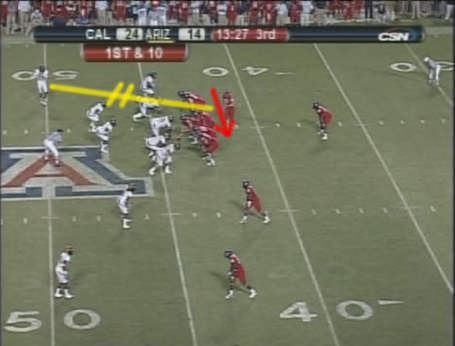 On this play, all Arizona eligible receivers will go out on routes.  Of course, Cal doesn't know this.  Meanwhile, Arizona QB Willie Tuitama is trying to determine which Cal defenders will cover which Arizona receivers.  Arizona's playcall utilizes motion to help figure that out.  Arizona motions their 2nd TE across the offense.  Cal responds by having their SS notify the rest of the defense of the change of formation and appears to be passing off the man-coverage to another player.  I've shown the passed off man coverage with the yellow line broken by two smaller lines. 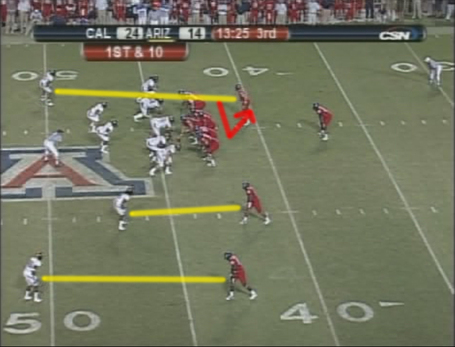 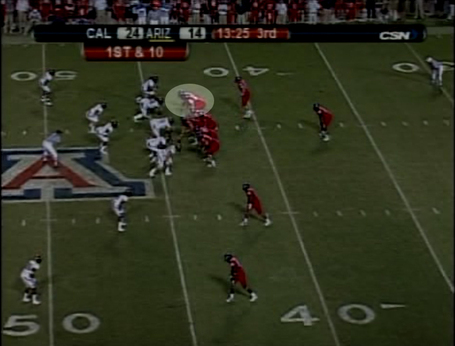 I've circled the Arizona TE so you don't forget about him.  He's key to this play's success.  Tuitama has yet to really know who is going to cover the TE or the RB.  Yet Tuitama can assume that one of Cal's LBs will cover the RB.  That leaves the TE - who is going to cover the TE?  Is it going to be a Cal LB or the FS?  Note that in the picture above, there are 10 Cal defenders in the frame.  The 11th Cal defender, the FS, is showing single deep coverage.  Of course, he may not be in deep coverage.  He might instead be in man coverage. 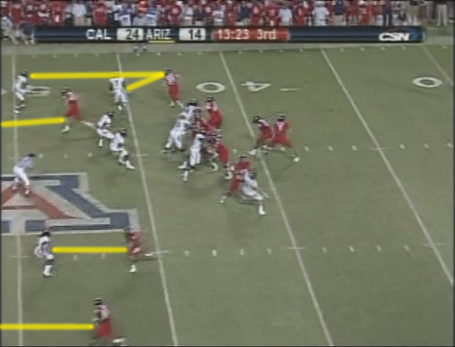 Here's the post-snap picture.  The movement of the 2nd TE into the backfield as an H-back helps set up playaction.  Ultimately, Cal's coverage is revealed post-snap.  Cal's WLB and SS cover the 2nd TE in man coverage.  Cal's corners are playing man coverage on the WRs, and Cal's FS is playing man coverage on the 1st TE (the one that was on the LOS).  This leaves Cal with no deep safety help.  All of Cal's defenders in the secondary are on islands - on their own.  Cal has no deep safety. 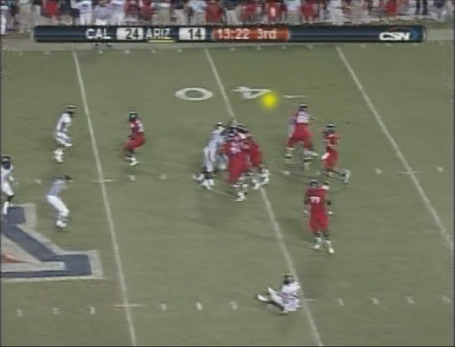 Tuitama knows exactly where he wants to go with the ball, and makes the pass.  Tuitama wants to attack the defense where it is vulnerable - where there is no safety help - and that's the deep middle. 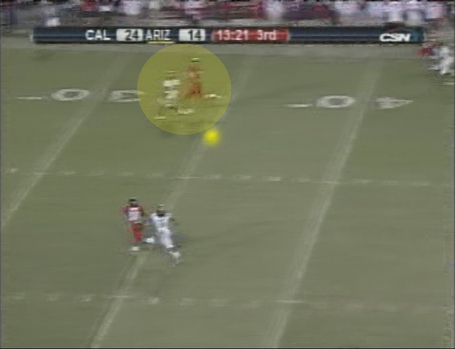 Tuitama goes to his go-to guy (the ball is the small yellow dot), Mike Thomas who is being covered by Syd'Quan Thompson.  Thomas runs a skinny post to the centerfield void and manages to get past Thompson.  Note in the picture above, I've shown Cal's FS covering Gronkowski with a big yellow circle (he was the TE that was on the LOS).  The fact that Cal was playing a Cover-0 drew the FS out deep center leaving Thompson 1 on 1 against Thomas with no help. 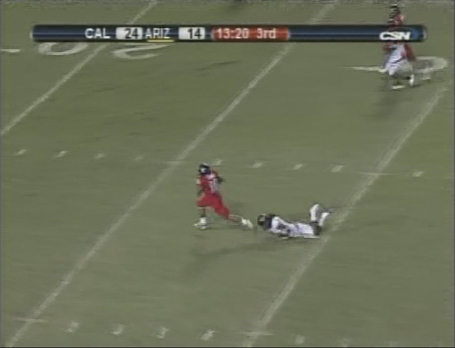 Mike Thomas makes the catch, Thompson fails to make the tackle, and Arizona scores a touchdown. 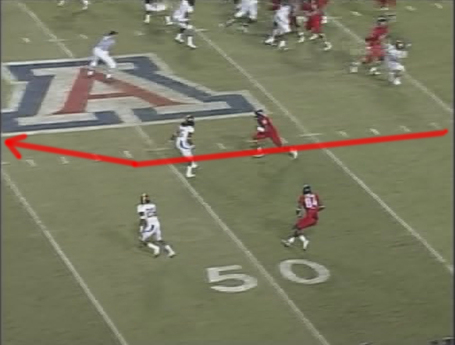 In my Pursuit Angles post, I mentioned how WRs sometimes are told by coaches to imagine stepping on the toes of the DB.  Thomas does exactly this.  Thomas is running a skinny post. 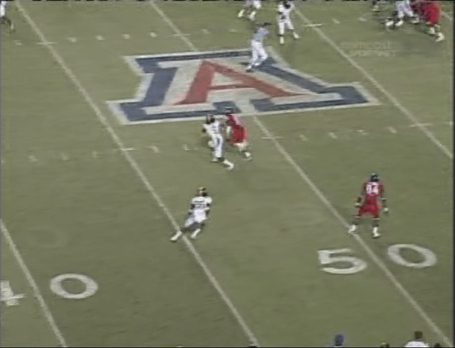 Thomas makes his break when he's right on top of Syd.  Syd actually does a pretty good job anticipating the direction of the cut and staying with Thomas. 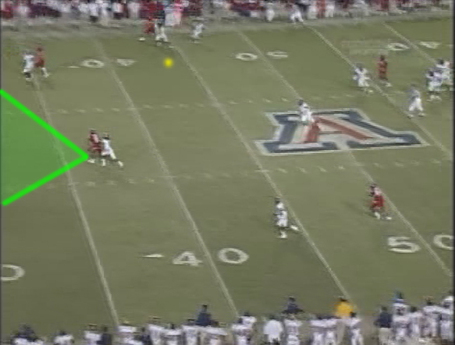 The problem occurs in this play in the way Syd defended the pass.  Syd attempts to play the ball (the yellow dot) from underneath the receiver - most likely expecting more of a lower bullet pass that he could bat away.  Instead, the pass was a nice deep ball with plenty of air under it that went over the top of the WR, and thus by attempting to defend the ball from underneath the WR, Syd is not in position to bat the ball away and diminishes his chances of making a tackle.  The green area in the picture above represents all the unimpeded area for Thomas to make the catch.

(1) QB guessing game.  Prior to the snap, the QBs are always trying to figure out which defenders are going to be covering which receivers.  On this play, Tuitama really only had to read Cal's FS.  If Cal's FS played deep coverage, Tuitama probably wouldn't have thrown to Mike Thomas (perhaps he still would have but it would have been a riskier pass).  If Cal's FS played man coverage on Gronkowski (the TE on the LOS), then Tuitama knew he could attack deep.

(2) Syd gets beat two weeks in a row on similar routes.  The routes were posts - once against Arizona State and against this game.  Is this one of Thompson's weaknesses?  Against Arizona State, Thompson allows the ASU WR to get very good separation which ultimately led to the catch.  This play, Thompson maintains good coverage on the WR cut, but mis-anticipates the type of throw that will be thrown.  Namely, Syd attempts to defend the ball from underneath the WR in anticipation of a lower bullet pass.  Just looking at these two plays makes for fairly inconclusive judgments as to whether Thompson has problems with post routes, but it's definitely something that opposing offenses are probably looking at.

(3) You (generally) want to aggressively defend the middle of the field.  Being on the team with one of Cal's greatest CBs in the past few years, Daymeion Hughes, you sort of pick up a few pointers.  Hughes was always very willing to help out his understudies and gave them pointers all the time.  One of his oft repeated mantras was to protect the inside of the field.  That's where the big plays usually happen.  When in man coverage all alone, you want to do your best to cover the receiver as tightly as possible and break on routes towards the sidelines fairly aggressively (one not need to as aggressively defend the sideline routes because the sidelines themselves help you defend the receiver), but you always want to be aware and not get baited by double moves or routes which take the receiver to the middle of the field.  When receivers get in open space, they'll make catches and rack up YAC.

(4) Put air under the ball.  Too often I hear Cal fans say "X QB doesn't throw enough bullets" or "X QB needs to throw bullets like Y QB."  It seems like Cal fans always want bullets.  Cal fans don't want to see touch passes or passes that "float."  But the fact of the matter is that some passes require touch on the ball, aka "air under the ball."   Not every route calls for a bullet pass.  Some passes require touch passes so the balls go over LBs in zone, or go over safeties.  So don't always think that every pass has to be a bullet - that's not true.