Share All sharing options for: IT'S BIG GAME WEEK, BEARS! 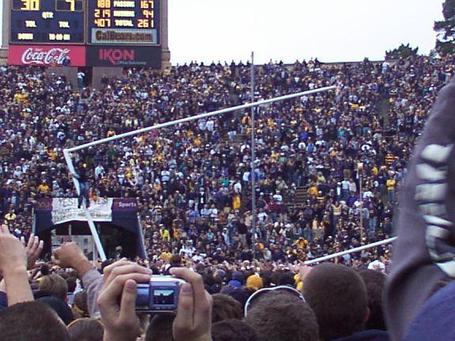 Oh.  Hey.  I didn't see you there.  I was too busy reminiscing about Big Game 2002.  For that is my favorite Big Game moment and perhaps my favorite Cal football moment of all time.  I know that it has been a rough few weeks.  But let's all take a moment to remember that we got the big one this week.

For many years, Cal fans didn't care too much about Stanford.  USC was the BIG rival.  And, in many ways, USC deserves the vitriol it receives.  Nonetheless, it was depressing for Big Game to lose some of its focus.  So, there was one silver lining from last year's game.  Sure, thousands upon thousands of brutal, poison ivy linings, causing me to write this. Bee Tee Dubz, I love this paragraph:

Yes, I like that new Britney Spears album.  I can’t deny it! It just makes me want to dance.

Anyway, last year, there was one silver lining amid the millions of brutal linings.  Like a trillion linings that if you saw them, you'd be all "Oh, god, that's the worst lining I've ever seen, and there's like a trillion linings right behind them.  Each one worse than the last!  These linings are worse than the writing on Entourage."  But, hey, one small silver lining.

Nobody is going to overlook the Big Game this year.  Especially after the last two weeks.  We could use some good times.  And against Stanford?  Even better.  We've had a lot of success with "Share Your Cal History" and "Share your USC Hatred" posts.  We thought we'd try a "Share Your Big Game Memories" post.  I'll go first!

If/when I have a child, I'll make sure to teach them the #1 rule of playground power, "Sticks and stones may break my bones, but words will never hurt me."  And although that might be a recess staple, there are a few exceptions.  Phrases like "The test came back and it's yours" or "Hey, Mr. Williams Ayers, when are we going to get to the "Pentagon bombing" portion of the curriculum, I have a presidential campaign to return to" can definitely hurt.  Especially that last one there.  That was just poor timing on Obama's part, really.   But, hey, thanks to ACORN, he managed to overcome that.

Nonetheless, none of that, NONE of those, can ever match the pain of those 6 terrible, brutal words "And Stanford wins the axe again!"  For many Cal fans, it was not until the Stanford fans swarmed their new Build-A-Stadium last year, that they had ever heard those horrific, horrific words.

But for us old timers (which is to say over the age of, like, 23), it was not always that way.   For 7 long years, we wandered the desert in search of a thirst-quenching Big Game victory.  Better than the Jews following Moses to freedom, but still, it was a solid 7 years too many.

On one fateful November day in 2002, that changed.  Standing before a giant blue and gold banner reading "Stanford Defeat Accomplished," Joe Igber, Kyle Boller, and coach Jeff Tedford led Cal to a 30-7 Big Game victory.  To the impartial observer, it was probably a rather boring game.  Neither team was anything greater than average that year.  Cal was up fairly big by halftime and in the second half, they just ran ran ran Cal legend, Joe Igber, to run run run out the clock clock clock.  Clock.  It was just a big Cal party in the second half.  A cathartic 30 minutes of game action as we took out our frustrations of the last 7 years.

The day was overcast and threatend rain, but we all felt as if the sun was FINALLY shining down upon us.  Most Cal fans are unimaginably pessimistic, unable to conceive of victory in any form.  But even the dowdiest of dowds there that day slowly came to the realization that yes, finally, omg, unbelievable, amazing, incredible, incomprehensible, incomprehedible.  We could win the Big Game!  F'relz yo!  F'realz! 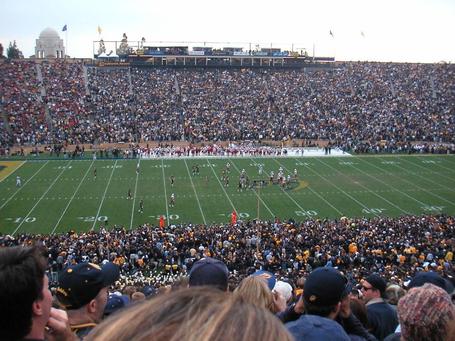 With a few minutes left in the game, the fans started to sort of rush the field.  They rushed the ground around the field, as it were.  Slowly, but surely,  the fans came out of the stands to surround the gamefield in anticipation of rushing the field, itself.  As the time slowly clicked down towards zero, the field became illuminated in humanity.  This great mass of drunken energy just thrashing about the sidelines, chomping at the bit to rush the field.  Those of us in the band did become briefly concerned that we might have to forfeit if they rushed too early.

With about 7 seconds left in the game, Cal recovered a fumble, essentially sealing the game.  I have the clearest memory of a shirtless man becoming incredibly agitated, if not also inebriated, at that point and just started running around the field of play as the Cal offense ran onto the field for 1 last down.  But for the Cal offense, it was, ultimately, too late.  The genie (i.e. shirtless drunken fool) was already out of the toothpaste bottle (uh, ok, keep metaphor separate in the future).  That mass of drunken humanity streamed onto the field with a stunning alacrity.  They paraded the axe, other fans, and even football players like Kyle Boller, Ravens backup QB of the future around the field on their shoulders. 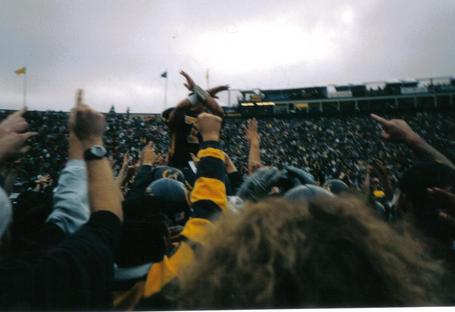 A phlanx of yellow shirted guards took their positions at the goal post.  In the past 7 years, when Cal lost, there had been occasions of Cal fans rushing the field and rioting.  One year, they attacked the Stanford Tree and tore it to bits.  Another year, they tore the *Stanford* goalposts up.  Another year, they attempted to rush the field, but were met by a veritable SWAT team of police, who held the angry Cal students at bay.

This time, WE WERE NOT TO BE DENIED!  We had waited so many years for this sweet nectar.  It was OUR time.  We were going to get those goalposts.  Sorta!  Cal fans managed to get to the North goal post.  One student, who later got busted in this, because he was a student government senator, climbed atop the middle-bar of the goal post.  When the students managed to pull the goal post over, he all of a sudden found himself dozens of feet in the air.  A hushed grasp fell over the congolmeration of students as they feared he might fall and hurt himself.  However, he slid down from the suddenly high middle post to the suddenly low side post to safety!  And with that, a might cheer went up from the heroes of Shelbyville.  They had banished the awful lemon tree forever, because it was haunt.  Now, let's all celebrate with a cool glass of turnip juice.

As for the South goal post, the army of yellow shirts stood strong.  Now, maybe another school might have given up.  Perchance USC students would have merely called in one of their butlers to handle the situation.  But not the always resourceful Cal students.  They carried the North goal post down to the South goal post, using it as a potential battering ram against the guards there.  The guards, realizing who wanted it more, scattered and soon the South goal post was down, too!  We're such problem solvers!  Go us! 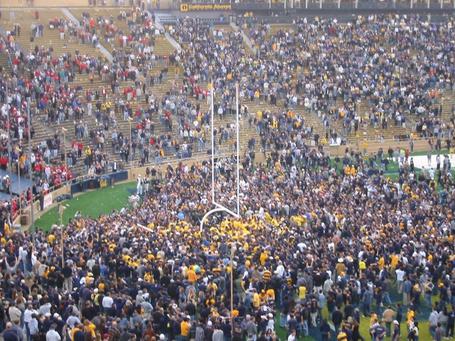 One of the goal posts was left in the stadium.  The other was carried down Bancroft to Sproul Plaza, scratching innumerable cars along the way.  Sure, destruction of private property is never great, but tell that to the fans, who RODE THE GOAL POST DOWN THE STREET.  Which wasn't me, unfortunately.  But, fortunately, in the Band, we marched the entire band all throughout the City of Berkeley stopping at innumerable places to play fight songs and cheer on the inevitable drunken rabbling rousing occuring nearby.

It was definitely a unique game at Cal and one that is unlikely to be repeated (mostly, because I hope we never, yknow, lose 7 years to Stanford again).  It was for all the years of students who never saw the Axe in Berkeley.  It was for all the fans, who had suffered through the 2000 Big Game, a really rough OT loss to Stanford.  Sure, to the objective observer it was probably just a boring 30-7 victory of one mediocre team over another mediocre team.  But that day in November 2002, there were no objective observers in Memorial Stadium.

Cal has had "bigger" victories in Memorial since then, beating teams like USC and Tennessee at home.  But none of those carry the emotional panache and epic catharsis of Big Game 2002.  It will remain in the pantheon of Cal victories, one of the finest games ever played.  Go Bears! 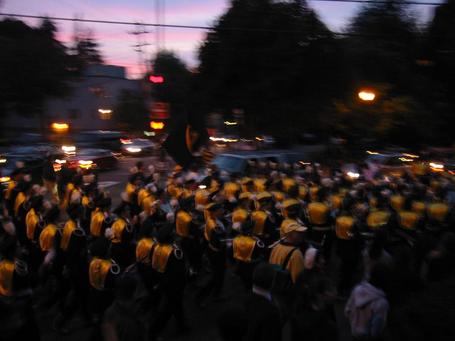 This post might not be complete without the other side of the coin.  Some perspective for those who became Cal fans in 2004.  I've written about this before, but it bears repeating:

In November 2000, I remember standing out there at Memorial Stadium. Cal was mediocre that year and the year before Stanford had gone to the Rose Bowl. So, the fact that we were currently battling them in OT was insane. We might beat Stanford. We could do this. This was unbelievable, they were supposed to crush us. We were terrible. We…………had hope.

Then, in the blink of an eye, there was a breakdown in coverage, a Stanford player caught the game winning TD and everything stopped. Nobody moved. We had clawed our way back into the game in the 4th quarter only to see another crushing defeat. The student section stood still for minutes at a time. And I remember looking down one row and seeing this 5th year student crying (Ed Note:  Who actually just recently signed up for the blog). Crying? Over a football game?

This was only my second year at Cal. Only my second Big Game. Both years at Cal had been, how you say, bad. The year before Kyle Boller (the original Jesus In Cleats) was thrown into the fire, we sucked, and Deltha was our only offense (and he played on defense). And 2000, we were slightly better. But still, nowhere near good. So, ya, it kinda sucked that we had lost Big Game 2000. And it kinda sucked that we had lost it in such a brutal fashion.

But to me, that’s just what we did, lose football games (and in specific Big Games). There was no frame of reference for success. Success at a football game related to how much fun I had with my friends while the game went on, not how well the team did. There generally was an inverse relationship between team success and my fun back then. The worse the team did, the less focused on the game me and my friends were. The more fun we had just relaxing.

So, to see somebody crying over a football game. To see somebody genuinely passionate, that confused me. I couldn’t see it from her angle. 5 years. 5 years! Not a single Big Game victory. 5 years of terrible, terrible football. And that’s how it ended for her. 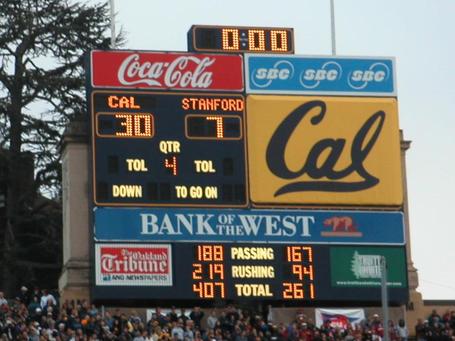 So, what's your favorite Big Game moment?  What jumps out at your first when you think of the Big Game?  GO BEARS!