After watching the Bears' frustrating and disappointing loss up in Corvallis yesterday, I needed some relief.  I found some at the bottom of a beer bottle (the first couple didn't have any, so I had to keep looking), but I find the best way to ease the pain of a Cal defeat is to follow it up with a Cal victory.  With that in mind, CBKWit and I headed over to Haas Pavilion yesterday evening to catch the season opener of the men's basketball team versus the University of the Pacific. 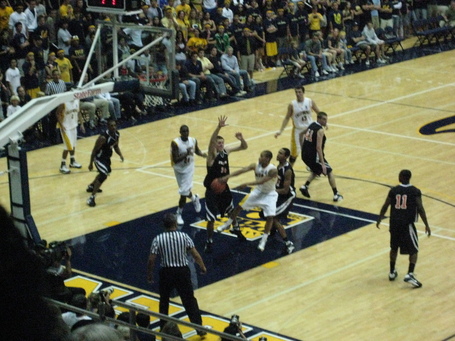 The only interesting shot I managed to take the entire game.

Overall, it was a good game, close enough to be interesting, but there was never really a doubt that Cal was in command.  A couple times Pacific got within 6, but it never really felt like they had a run in them, and the Bears were able to hold off the Tigers and give Mike Montgomery his first victory at Cal.  Here are CBKWit's and my thoughts on last night's victory:

- My (Ragnarok's) new favorite player:  Jorge Gutierrez.  By my count, he drew at least 4 fouls in the first half, and his infectious energy is exactly what our defense needs this year.  He sort of reminds me of A.J. Diggs, if Diggs had any scoring ability whatsoever.

- Defense overall was pretty good in the first half.  Only 20 points given up, and I don't think I saw any uncontested baskets by the Tigers.  Not very many open shots at all.  No, Pacific wasn't shooting lights-out, hands in their face or not, but it was definitely a nice defensive effort.

- One critical defensive improvement I noticed was ball pressure.  Cal was pretty terrible in this area last year (watching Mitch Johnson, he of zero outside shot, get 5 feet to operate and feed the Lopez twins with ease comes to mind), but last night our guards (and forwards, when defending perimeter shooters) pressured Pacific beyond the arc.  Braun's area of expertise was supposedly defense, but if you caught any of the games at Haas last year (Stanford, UW, and especially WSU and Oregon), you didn't see much defensive skill or, even more discouraging, effort.  Last night, for the most part, our guys got after it.

- Defense got sloppier to open the second half, as Pacific managed to free up some shooters on the perimeter and knock down some long range shots.  They cut a 16-point halftime lead in half, and this was about a 6-10 point game most of the way down the stretch.

- Offense was...interesting.  It was fairly effective, but mostly because the Bears were fantastic from beyond the arc.  Both Randle and Christopher hit a number of big shots from 3 as the play clock wound down, basically bailing out offensive sets where the Bears got very little going.  When Theo manages to bank a 3 as time runs out, you know things are going Cal's way.  These are good shooters, so it's not like the Bears were hitting a bunch of flukey shots (the bank shot notwithstanding), but it'd be nice if Cal had a little more going on inside.

- Jordan Wilkes can shoot a bit, but he's *so* weak to the basket.  It's sometimes maddening.  He does some nice things on the court, and deserves significant minutes, but despite his height, he's sometimes seems rather miscast as a center.  The Bears could *really* use some inside presence, and I'm not sure that Wilkes provides that.

- Max Zhang is -- how you say -- not ready.  He sometimes looks lost out there, getting confused trying to set screens against defensive players that have already moved past him.  Keep giving him playing time, but I think it might be a couple years before Max is ready to take on a major role with this team.

- In fact, much of the inside defensive dirty work was performed by Jamal Boykin and Harper Kamp.  Neither figured much on the offensive end, but each made their presence felt.  Kamp, in particular, drew at least 3 charging fouls on the Tigers.  The man sure knows how to flop.

- However, Boykin's presence wasn't felt as much as the Bears would have liked, as he fouled out (on a stupid foul, no less) with more than 7 minutes to go.  With the lack of size depth that the Bears are already feeling, Boykin can't afford to foul out in stupid ways.

- Huge dunk by Max that brought the house down, though.  Honestly, I'm not even sure if he had to jump to slam it home.  He also had a nice one-handed bank putback late in the game, the sort of play only he can make because of his height.  Turns out, we may need him to get better soon, as Jordan Wilkes went to the locker room grimacing with 4 minutes left.  And he does have one significant advantage over Wilkes: even though he's very skinny, Wilkes is somehow even skinnier, and Max can set a screen that forces a defender to change his trajectory.  When Wilkes turns sideways, he's practically invisible and it doesn't take much to avoid his picks.

- If you're a Cal Basketball fan who's been frustrated in the past by the sometimes brilliant but often inconsistent play of point guard Jerome Randle (which is to say, anyone who's been paying attention), I think you'll like the new and improved Randle.  He really seems to have cleaned up his game, making smarter decisions and cutting down on stupid turnovers, and I would guess that Montgomery deserves some of the credit for that.  Eddie Kleinhans said as much on the Cal Radio post game report at Looneys (food: decent; service: not so much), commenting that Montgomery's relationship with Randle would, to a large extent, determine the course of our season.  He followed that by saying, from the few practices he's attended, it's clear they're working together very well.  Randle himself deserves a lot of credit, for he's clearly worked on his game extensively in the offseason.

- Eddie also commented on how often Montgomery stops practice to teach when he sees something he doesn't like.  Kleinhans didn't say this explicitly, but the implication was that this is completely different from the way Braun ran practice, and that the players were responding to instruction from the coaches.  A coach that coaches - what a concept!

- Montgomery did make an interesting comment on the "Mike Montgomery Show" before the game on 1550AM, noting that Jorge would not be the backup point guard, but instead the duties would fall to either Nikola Knezevic or walk-on Nican Robinson.  He wouldn't say who he favored (Nikola's not much of a shooter, but a good defender, while Nican is a bit undersized), but judging by the PT handed out by Monty during this game, it looks like Robinson has the early lead.  Regardless, I think we're going to see 30+ minutes of Randle every night for the foreseeable future.  This is not a bad thing.