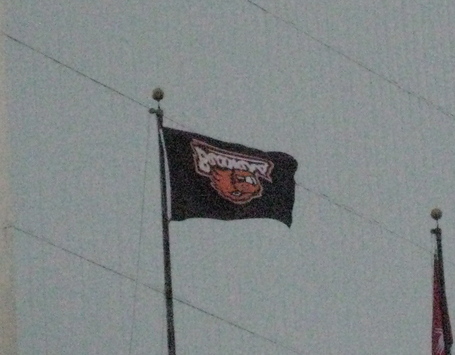 If you're waking up early tomorrow, craving football, but you only have bunny ears on your TV, you're in luck: Notre Dame at Navy on CBS! Since Navy broke their record 43-game losing streak to the Irish last year, I can't think of any compelling reason to watch this year.

Looking for a flip-to channel during the Cal game? Well, CBS has South Carolina at Florida, the week's ONLY matchup of ranked teams. I will be shocked if the final is closer that two touchdowns. Honestly, it looks like a pretty dull slate this weekend, so either we'll see no upsets and collectively yawn, or a lot of major upsets and this will go down as one of those "Shakedown Saturdays" or whatever. Even the 5pm ABC game bores me. I'm glad I'm heading to Haas instead to watch the men's basketball season opener.

Ohio State at Illinois has the potential to be a pretty good game, though I think, at the beginning of the season, many of us thought this game would have more Big 10 title implications. The Illini upset the Buckeyes last year at the 'Shoe, nearly costing Ohio State the title game and putting the Illini in the Rose Bowl.

USC at Stanford is another revenge game from a major upset last year. I really can't see the Trojans overlooking the Cardinal for the season straight season, but Jim Harbaugh has gotten Stanford well past "awful" and firmly into "mediocre" territory, and they're just one upset victory from being bowl-eligible.

Here you go, folks. 6 reasons why you shouldn't bother paying for premium cable. Go to a sports bar if you must, but the best I could say about these games is that I think Air Force has a pretty good shot at knocking off BYU at home.

Who would have picked, at the beginning of the season, that Georgia at Auburn would be on at 9:30 in the morning and no one would be watching? Not me. North Carolina @ Maryland is actually on ABC, but gets squeezed out of the schedule on the West Coast because Northwestern at Michigan supposedly has more appeal out here. I guess...

In the Pac-10, Arizona at Oregon is actually an important game with postseason implications. Both are going bowling, but both are trying avoid a 3rd loss and stay within striking range of 2nd or 3rd in the conference. Since Cal has beaten Oregon, and Oregon has been to both the Holiday and Sun bowls recently, I'll be rooting for the Ducks (I think being tied with them them instead of Arizona would give the Bears a better bowl berth). Meanwhile, WSU at ASU is about as interesting as the rest of the games on the uninteresting slate; ASU aims to keep its slim bowl hopes alive for another week, and WSU aims to not give up 60+ points in another Pac-10 game.