A (Very) Quick Look at the Pacific Tigers

Share All sharing options for: A (Very) Quick Look at the Pacific Tigers

(not to be confused with the Asian Tigers)

So, I know there's this somewhat important football game up in Corvallis tomorrow, but we've talked plenty about that.  What we haven't talked about at all is the first Men's Basketball game of the year, which is happening in Berkeley almost immediately following the game (5PM tomorrow).  The men will be taking on the University of the Pacific Tigers, a team which I know virtually nothing about.  So, to prepare myself for tomorrow's game, I did a little research.  Here's what I came up with:

The University of the Pacific is located in Stockton, California.  If you've never visited their campus before, don't bother; I have, and I can't think of a single notable or interesting thing about it.  Which is pretty much how I feel about Stockton as a whole, but that's neither here nor there.  Their basketball team is actually pretty good, going 21-10 last year, good for 2nd in the Big West, though a quarterfinal loss to UC Irvine in the conference tournament probably cost them a shot at the NCAA's, which they've been to 3 out of the last 5 years.  Actually, looking over their schedule from last year, there isn't a whole lot to be impressed about.  A 70-66 win over Nevada is pretty good, but other than an 80-64 loss at Oregon, they didn't play a whole lot of teams that weren't either second-tier UC schools or CSUs.

Gone this year is leading scorer Steffan Johnson (14.5 ppg), but second-leading scorer  (12.8 ppg) Chad Troyer, a 6' 4" guard, returns, as does Anthony Brown (10.7 ppg), a 6' 7" senior forward, who has been named to the Big West's Preseason All-Conference Team.  I imagine he's going to be the guy the Tigers' offense will run through. 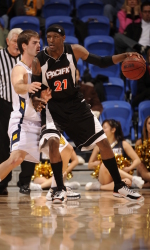 There's not a lot of size on this roster for the Bears to contend with, with just 3 players on the roster standing 6' 8" or taller, with 6' 9" forward Sam Willard the tallest.  Statistically, none of the Tigers' big guys made a big impact last year; Bryan LeDuc led the bigs by averaging 6.9 ppg and 3.9 rpg, playing less than 17 minutes per game.  I imagine the Bears will try and work Jordan Wilkes (and Max Zhang) into the lineup a good amount, but if they're forced to win with taller forwards like Jamal Boykin and Omondi Amoke (and Harper Kamp, if he's able to go), I don't think Bears will suffer too much.

On the perimeter, Chad Troyer is the guy most likely to hurt the Bears.  The senior shot 44% from beyond the arc last year, and if the Bears give him as many open looks as they gave some of Seattle Pacific's shooters last week, he'll knock a few down.  The Bears' strength this year will be on the perimeter, and they need to press that advantage and lock down the outside shooters.

In contrast to our younger Bears (not one player on our team is in their final year of eligibility), Pacific brings 4 seniors and 4 juniors to Haas on Saturday, the sort of experience that good mid-majors use to make a tournament run.  I don't have any idea how good they actually are (they're picked to finish 3rd in the Big West, for what that's worth), but I get them sense that they won't be any sort of early-season patsy for the Bears.  They're the sort of team that a good, tournament-ready Pac-10 team should handle easily at home, but I honestly don't know what our Bears will do.  Forced to predict, I might say Bears by 8, but I wouldn't bet on it.