Share All sharing options for: Looking Back at USC: Illegal formation? & Penalties

I see fellow Cal blogger SDGldnBear has beaten me to the punch, nevertheless, here's my take...

We all know what this post is going to talk about.  So let's just jump right in.

The play was first called an "ineligible receiver down field."  Later after the game, ABC news said the refs clarified it as an "illegal formation."  I tended to agree with the call upon first thought.  But now that I look at the play more and more, I think Pete Carroll might have convinced the refs that it was an illegal formation when the refs weren't going to call it. 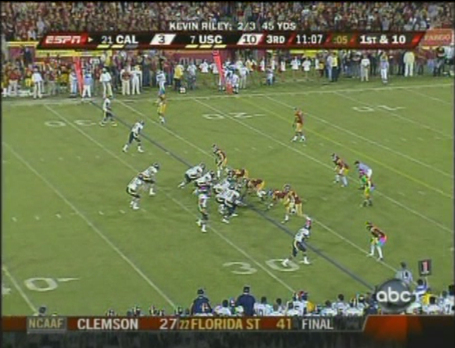 So that means we need two other players on the LOS.  Specifically, one of those players needs to be Tucker on the bottom of the screen, and either Ross or Boateng at the top of the screen.  Ross and Boateng both can't be on the LOS otherwise Ross would be covered up and when Ross heads downfield he'd be an ineligible receiver down field.  So it must be either Ross or Boateng but not both.

Is Tucker on the LOS?  It appears so.  He could probably be up a few more inches, but for the most part he seems to be on the LOS.  If you notice, Tucker's front foot is on the same yardline (the 28 yardline) as Cal's right tackle's front foot and body.  Thus, it truly does seem like Tucker is on the LOS.

If Tucker, Ross, and Boateng were all really on the LOS, then the penalty would be an ineligible receiver down field (because of Ross).  That's what the refs called it originally, but then why did they later clarify the play and say it was an "illegal formation"?

So because of the fact that the refs clarified the play later on to say it was an illegal formation, that means Cal didn't have at least 7 men on the LOS.  Meaning that between Boateng, Ross, and Tucker, only up to one of them was on the LOS although potentially none of them were on the LOS.

So who was not on the LOS? 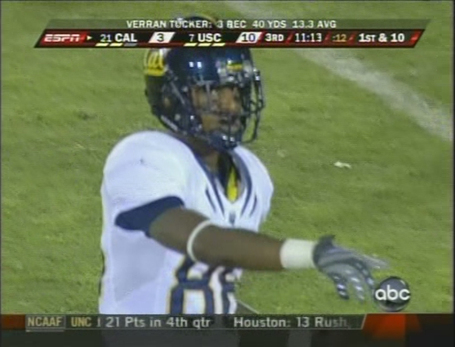 But as I already pointed out in the first photo, Ross is on the same yardline as Tucker.  So if Tucker is theoretically on the LOS, then so must Ross.  But if Ross is on the LOS, then so is Boateng.  Meaning, Cal had eight men on the LOS, which satisfies the requirement that the offense have at least seven men on the LOS but would draw an "ineligible receiver downfield" penalty because Boateng covered up Ross and thus when Ross released down field he'd be the ineligible receiver down field.

But the refs clarified the play and said it was an "illegal formation!"

So for the play to truly be an "illegal formation," either the refs thought:

(1) Tucker wasn't on the LOS, thus even if Boateng was on the LOS, and Ross was off the LOS (to avoid the "ineligible receiver downfield" penalty), Cal would have only had six players on the LOS thus the illegal formation; or

(2) Tucker was on the LOS, but neither Ross or Boateng were on the LOS.

Yet, the refs appeared to arrive at neither of the above conclusions.  Why?  Because there are no flags.  Let's look at screen grabs for evidence of the refs concluding neither of the two above notions... 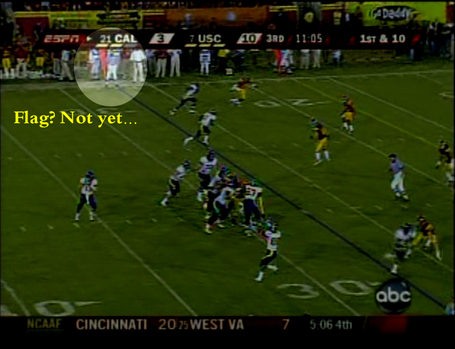 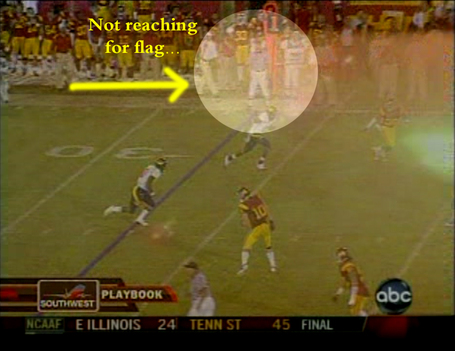 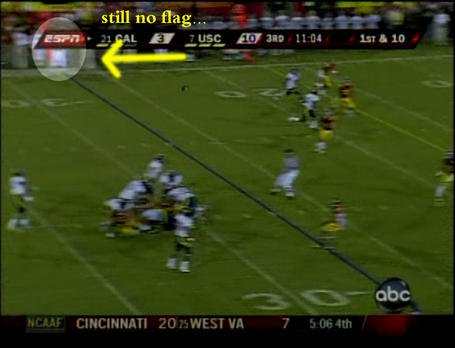 Well into the play, the ref still hasn't thrown a flag. 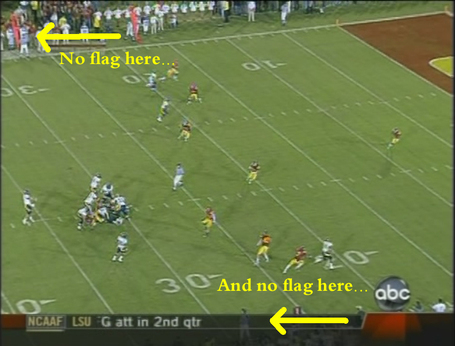 And finally, the ref on the other side of the field by Tucker hasn't thrown a flag either.  Thus, he must have been satisfied that Cal had seven men on the LOS, and specifically that Tucker was on the LOS.  You can clearly see the ref looking left towards Riley who has just thrown the ball.  There isn't a flag in sight.

So the conclusion is this: both line judges thought Cal's formation was legal and Cal had seven men on the LOS (which implies that Ross wasn't covered up and thus he wasn't an ineligible receiver downfield).

But if that's what the evidence shows then why did they call a penalty?!?!

That must be the answer.  You see, Boateng is right in front of the USC bench.  Without a doubt, the USC coaches saw Boateng frantically trying to tell Ross that Ross should back up to ensure Ross was off the LOS.  So when the USC coaches saw this, after the play, then went to the line judge who was on their side of the field, and said something like: "Hey, didn't you see the WR telling the other WR to back up?  That must have been an ineligible receiver down field"

A statement like that would make sense.  The line judge on USC's sidelines would have a thought process like as follows: "Boateng is telling Ross to move back, Boateng wouldn't be telling Ross to move back unless Boateng thought Ross was on the LOS and Ross should have been off the LOS, thus Ross was on the LOS, and thus Ross was covered up and was an ineligible receiver down field."

Of course, that's what the penalty was originally.  But as we all know, they clarified it later on to "illegal formation" - which doesn't make sense since apparently at the time of the play, both of the line judges appeared satisfied that the formation was legal on their respective sides.

So the evidence just doesn't add up to an "illegal formation" penalty. 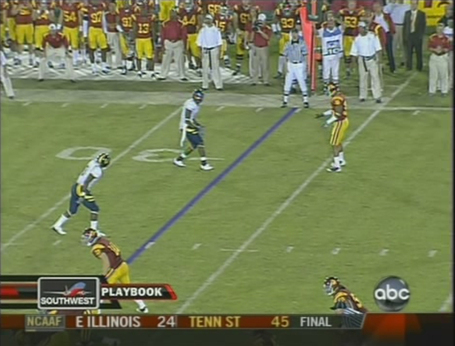 Ironically, Ross seems to think he's on the LOS, and Boateng should be off the LOS.  Ross can clearly be seen motioning to Boateng to move back.  The entire time though, Boateng thought he was supposed to be on  the LOS, and was telling Ross to move back. 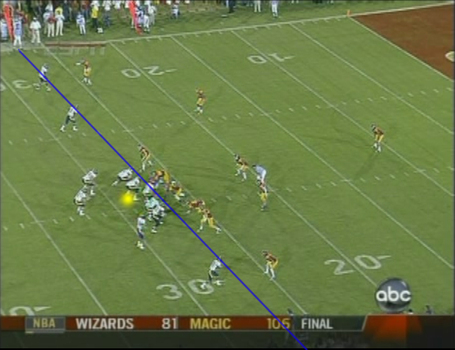 In the end, Boateng relents and gets up on the LOS whether he should be there or not.  When the ball is snapped (yellow dot), it certainly appears to the line judge on USC's sideline (top of the picture) that Boateng is on the LOS, and Ross is off the LOS. 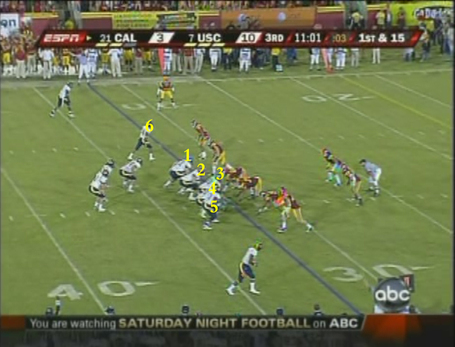 On the very next play, Cal gets a real "illegal formation" penalty.  As you can see from the picture above, Cal only has six men on the LOS.  The WR at the bottom of the screen should be on the LOS.

Quarterback is at Fault Too

The WRs aren't the only ones at fault here.  The QB should have fixed this error.  It's the QB's job to notice these minute details and fix them.  Longshore has done it before.  So has Riley.  But perhaps in the craziness of the Coliseum noise it slipped Riley's attention.

I think what's happening here is when Mack is telling the other offensive linemen when he's going to snap the ball, he's accidentally moving the ball.  You see, Mack often does that point-the-left-hand-forward-just-before-the-snap thing to notify the other offensive linemen via their peripheral vision when he's about to snap the ball.  Either he's slightly moving the ball when he does this, or the defensive linemen are reacting to him pointing and thus react (jump), but the refs flag Mack instead of the defense.  If you watch the game, you can clearly see Mack is confused as to why he's being flagged.  He clearly thinks he has done nothing wrong - which to my knowledge and from the hard-to-see video he hasn't done anything wrong.  Unless, of course, the whole point-the-left-hand-forward-just-before-the-snap is illegal.  But Mack has been doing that for a while (starting last year, I think) and if it truly was illegal you think they would have stopped him a long time ago.

Give a listen to Ken Crawford's USC podcast.  He's got a lot of good stuff including a quote from Tedford saying how even though the Phantom Catch II was shown on the replay screen, it was hard to see from across the field and it wasn't really shown early enough to challenge the play.