Or, perhaps more appropriately, Shivering in Victory. The associated press calls this game "Berkeley's worst game-day rainstorm in a decade." I'm not sure if it was any worse than last year's USC game, which was definitely colder, but it was close. Regardless, I feel a lot better now than I did after USC last year, and I doubt any Cal fans are complaining about the win. And besides, RemorsefulBruinBabe reports that the ESPN crew gave a nice shout out to those of us who toughed it out in the rain: "If you are still in the stands right now [~45 seconds left in the game], you are a great fan."

There were 8 turnovers in the game, not including a snap out of the endzone for our long coveted safety (finally! it seemed impossible that the refs could call anything else, but I was holding my breath and looking for a flag). It was a pretty volatile game with a number of rapid, intense swings, especially in the second quarter as the teams tried to out-turnover each other. Yet the biggest play of the game wasn't one of our four (!) lost fumbles, or even Worrell's huge interception at the end of the second half. In a game full of huge plays, the biggest was a 5 yard false start. 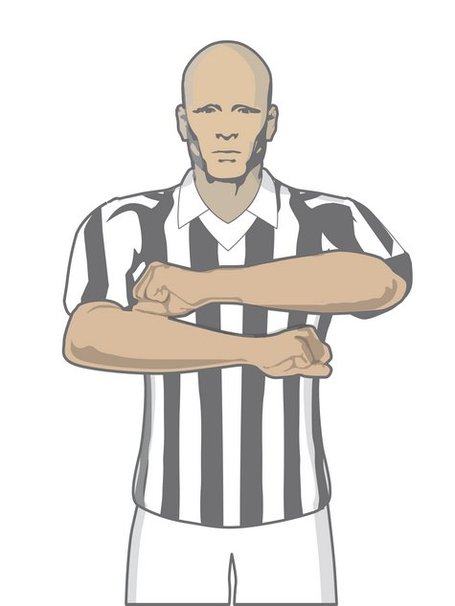 Oregon had cut the deficit to 3 on an embarrassingly easy touchdown drive (3 plays, all of them runs of more than 15 yards) in the third quarter. After a Cal 3 & out, Oregon marched right down the field and was poised to take their first lead since the opening touchdown. But on 3rd and 1 from the Cal 10, an Oregon player jumped early, one of only four duck penalties for 36 yards on the day. The 5 yard penalty made it 3rd and 6 instead of 3rd and 1, and their third down QB draw netted only 3 yards. On the next play, kicker Matt Eversen missed a 29 yard field goal.

Cal would manage only one first down on the next drive, but Oregon fumbled the punt return and resident Duck assassin Marcus Ezeff recovered at the Oregon 6. 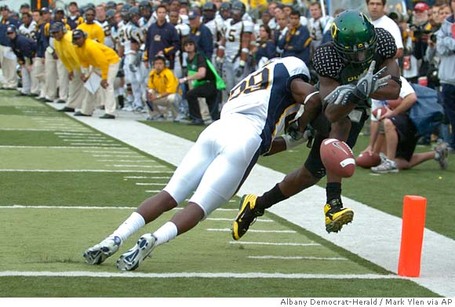 Cal scored 2 plays later to make it 26-16. What looked like a duck touchdown drive and a 23-19 Oregon lead became a Cal touchdown less than five minutes later. The false start, and the fourteen point swing which ensued, determined the game.

Of course, recovering fumbles (and intercepting passes) is only part of the story. Teams need to be able to capitalize on opposing turnovers, and Cal, despite losing the turnover battle by two, was the victor in this area. Of the three Oregon turnovers, two (the Williams interception immediately before halftime and the Ezeff fumble recovery) led to quick Cal touchdowns. The Oregon very-long snapper gave Cal 2 more points on the long awaited safety. The only turnover that Cal did not convert into a score was a second quarter interception by Sean Cattouse deep in Cal territory, immediately following one of Jahvid Best's two fumbles. Oregon, on the other hand, capitalized on the early Riley INT for a touchdown, but failed to score after any of Cal's 4 (!) lost fumbles, including the aforementioned Best fumble at the Cal 17. That's a 16-6 Cal advantage (Oregon missed the extra point following their touchdown) and, not surprisingly, the Cal margin of victory.

This was a nice victory over a decent conference opponent, which puts Cal back into the conference race for exactly 1 week. Win at USC next Saturday and Cal is in great shape to win the Pac and go to the Rose Bowl. Do I expect this to happen? No, considering the injuries and ineffectiveness of our offense (when Best was on the bench, presumably due to his 2 fumbles, we were down 6 of our 11 offensive starters - Riley, Best, Calvin, Guarnero, Malele, & Tepper, and 7 if you count Teofilo instead of Schwartz) and our less than stellar road appearances. If we get some of our offensive players back (namely Riley and some modicum of depth on the o-line), we'll have a shot against a USC sqaud that has seemed vulnerable at times (not today, though: 49-0 USC after three. Then again, it is the Huskies).

Regardless of the outcome next week, there were plenty of encouraging signs today. Nasty Nate did not throw ANY interceptions (not even a back-breaking fourth quarter INT just for fun) and our receivers did a much better job of catching the ball, all the more surprising since they were playing in a bit of a rainstorm. Our defense continues to look very, very strong (at home), creating turnovers and for the most part (excepting two drives in the 3rd quarter) making life tough for the duck running game. Our three senior linebackers all made huge plays (as they do pretty much every week) and Syd was generally Syd. Perhaps most encouraging to me, defensively, is the continued strong play from Cameron Jordan and Darian Hagan. Jordan has looked good for a while, but he's been great since taking over for Rulon Davis. I think we're getting more production from his defensive end position than we did before Rulon's injury. At cornerback, Hagan keeps breaking up passes and making strong tackles in run support. Both of these guys are rock solid right now and look like potential stars: Hagan looks better than Syd did at the beginning of last year (GULP I STILL LOVE YOU SYD) and Jordan is our most explosive defensive end since Ryan Riddle in 2004. And they're both sophomores.

That said, the biggest surprise to me was our offensive line. I was not confident in our chances today, and much of that hinged on our banged up o-line: we were missing our 1st, 3rd, and 4th offensive tackles and our top 2 guards, which would be damaging in any game but especially so against the top pass rush in the conference. Aside from one play when all-conference DE Nick Reed destroyed LT Mitchell Schwartz and blind-sided Nasty Nate, the offensive line gave our QBs enough time to throw and opened up some holes for our running backs. Our O line hasn't been consistently great this year, but they stepped up to the challenge and then some today.

GO BEARS! All aboard the Pain Train! 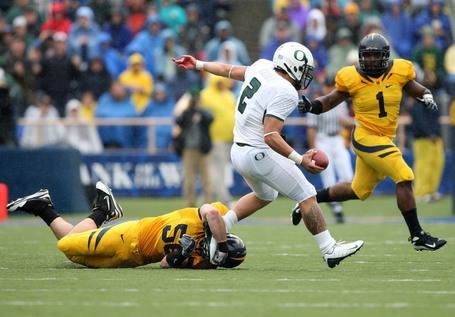