As of right now, there are four teams tied atop the Pac-10 standings with just one loss apiece: Cal, Oregon, Oregon State, and USC. Oregon State has already beaten USC, while the Trojans have defeated Oregon. Ignoring the other possible contenders for the Pac-10 crown (Arizona and Stanford still have remote, highly improbable shots at the title), that leaves just 4 games between the 4 contentders, games that will most likely determine who gets the conference's automatic BCS bid. Those games:

As you can see, Cal's got a tough road to hoe these next three weeks, but it does control its own destiny. Even if the Bears can't run the table, Cal will definitely have a say in who does win the conference title, and depending on who they lose to, there are scenarios where Cal loses again but still gets the automatic BCS bid.

But that's getting ahead of ourselves. Today, it's the Ducks, and only the Ducks, that matter. Win today, and then we can start talking about scenarios. 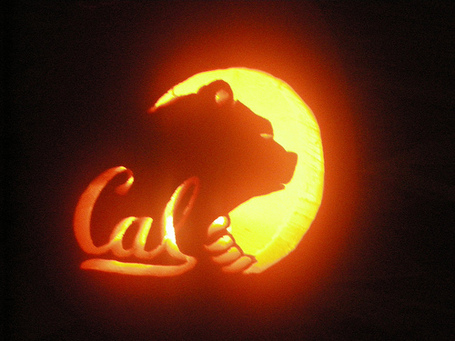 How about a little post-Halloween mojo to get the morning started?

While you're not rooting on our Bears, here's what else is on TV for your College Football Saturday viewing pleasure:

Like most of us who will be at the game today, I'll miss watching what promises to be a doozy of a Cocktail Party in Florida. You can certainly understand why CBS pays all of that money for broadcast rights to SEC games.

NBC, however? That's harder to understand. For all their millions, they get the exclusive right to nationally broadcast...Pitt at Notre Dame? Ugh, whatever. And what's with the extremely odd starting time? Is John McCain running a 13-minute counterattack ad?

After the game, you should have about an hour to head home and get settled in for Texas at Texas Tech. Most of the experts I've seen are predicting an end to the Longhorns' run in Lubbock, but I'm not so sure. I think the 'Horns pull this one out.

Waking up to mediocre Big 10 football on ESPN seems like a weekly tradition. This week we get a couple of marginally-ranked teams in Michigan State and Minnesota hosting formerly-ranked Wisconsin and Northwestern. I'll be watching the first part of the Sparty game before heading up to Berkeley, but I can't say that I'll be enjoying it.

For those of you at home, you can switch over to UW @ USC immediately after the Cal game; I probably won't get home until after 'SC has already hung 3 or 4 touchdowns on the Huskies. Oh well.

Forced at gunpoint to watch one of these games, I would probably pick Florida State at Georgia Tech, mostly because I'm one of those people that really likes watching the triple-option. Also, I rather expect Florida State to take their new ranking and promptly tank on the road. Even if they don't, they're way too high at #15. Should be fun.

What? Nobody's bothering to broadcast Washington State @ Stanford? Really? I am shocked, SHOCKED I tell you. Wazzu's gonna lose, and the Tree wil move tantalizingly close to bowl eligibility at 5-4. Too bad their final three games are @ Oregon, vs. USC, and @ California.

Wait, what am I saying? That's not too bad; that's a delicious opportunity to take back the Axe and kill the Cardinal's bowl hopes in one fell swoop! I haven't looked forward to Big Game this much in quite a few years.

This thread should take us up to kickoff and through the first quarter; open threads for the 2nd, 3rd, and 4th quarters should follow. Comment away! Also: The CGB has been posting a lot lately. To not be forgotten are other excellent posts: See Maharg shotgunning a beer; some more photos from the Cal game, and videos of the awesome marching band performance, see my post-game thoughts and overly generous grade to Riley; our discussion of the Top25, and see our once-per-month post by CBKWit. Also, Hydro's amazing analysis and a discussion regarding running up the score. Plus, YouTube Thursday, and the Roundtable. And don't forget our Q+A with Addicted to Quack and a slight statistical rundown of the Ducks.