Share All sharing options for: Cal v. ASU Photo Essay I: March Up!

Well, another exciting victory for our Golden Bears.  Give the Arizona State Sun Devils all the credit in the world, they played hard, never gave up, and were closer than the score might appear.  Cal played with passion, though, especially the D and now has a bye week to enjoy the fruits of its labor.

But here at the California Golden Blogs, the work is never done.  As usual, we have a full slate of analysis and opinion.  And, as usual, I'll have nothing to do with that.  Instead, I'll comb through the nearly 300 photos I took (along with photos from  TrisWeb) to craft a narrative of the day for those who might not have been able to be there.

It's almost as if you were there yourself!  Speaking of people who finally attended a game, The Maharg came down from his Arctic Ice Castle to feast his eyes on a Cal game (in Berkeley).  We even snapped a photo together! 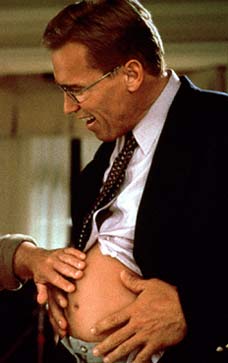 Now, what is exciting about this game is that I snuck onto the field for the pre-game warm ups.  I even sort of snuck into the game, because nobody checked my ticket ever.  I just kinda wandered in at the same time as the band and before I knew it I was at North Tunnel.  So, that's a key suggestion for you cheapstakes out there.  It's so easy to sneak into the game without a ticket, I fell ass backwards into doing it.

Of course, while there, mere feet away from the players, I took an absurd amount of photos.  So, I'll probably break this up in to 5 posts, instead of the usual 3.  Many others here have put up all their photos in 1 post, but I'll slowly roll them out, allowing you to enjoy each one like a fine wine.  1 for the March up, 2 for the pregame warm ups, 1 for the 1st half, and then another for the 2nd half.  And not only do we have some photos from the field from pregame warm ups, we also have some photos from the field DURING THE GAME.  So, keep your eyes locked here for all this bunly goodness!

But where else would I start than with our loyal hero, The Maharg.  He met us at Sproul Plaza for the band show.  And guess what he didn't have tucked? 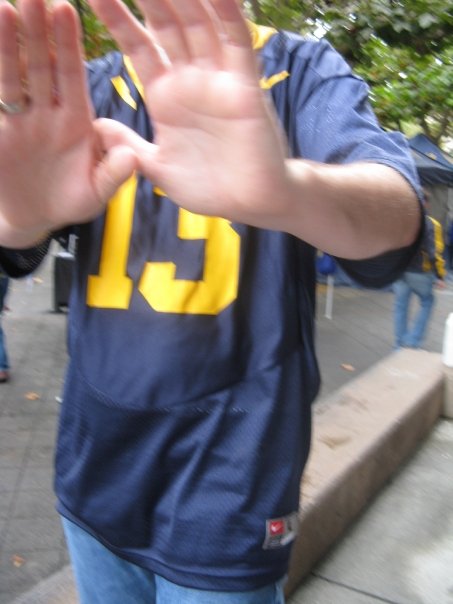 The photo came out a bit blurry, because he was trying to push me back while exclaiming "This is creepy!"  But the only thing that is creepy is tucking in your jersey.  Aren't I right, TuckNJersey, you creepy bastard!

Bee Tee Dubya, notice the jersey he is wearing.  So last season!

I figured since it was Homecoming, might as well take in some of the pomp and circumstance of the California Marching Band.  For those new to the scene, about an hour and a half before game time, the band has its "Sproul Steps" concert, located nonironically on Sproul Steps.  Rain, wind, or shine, the band runs up the from Lower Sproul to the Steps. 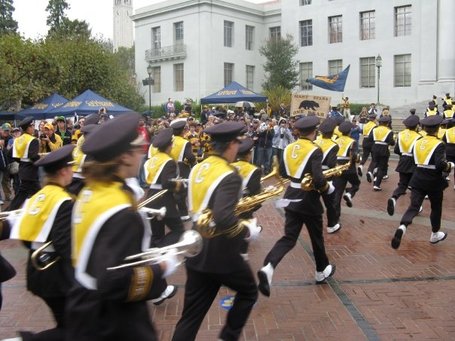 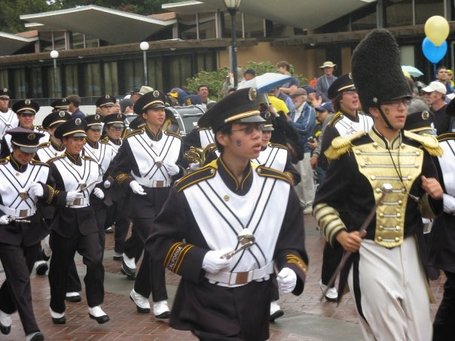 They do their concert there.  I was sort of stuck in the back and didn't get any good photos: 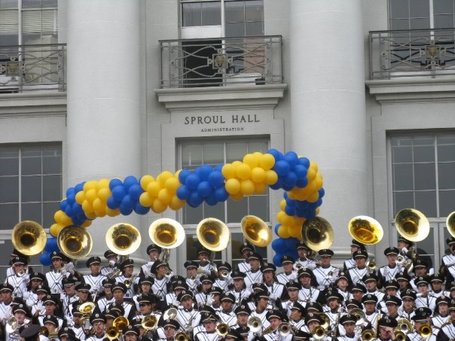 Then, after the concert, the band marches from Sproul up to the stadium, taking a rather windy route.  I have no idea how or why this route came into existence.  The marching band is an oddly organic being, as anybody who ever wrote their PoliSci 2 essay on differing means on control knows.  Wow, what a terrible sentence.  The point is that in PS2 there's an essay on different types of power and control and everybody who is in the band thinks they are the first person to think of doing it on the band.  I did it on the band, thinking I was original.  Others did it on the band, thinking they were original.  We weren't.

Either way, certain traditions disappear as quickly as they came into being.  Others continue perpetually in one form or another. 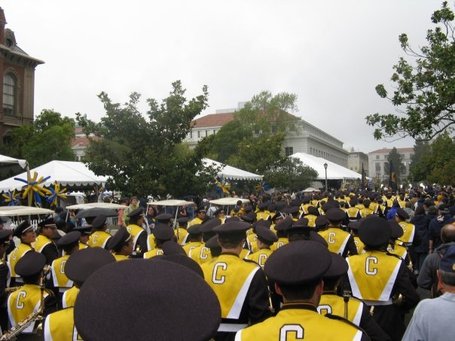 Generally, during the marching only the drums play their various cadences to tell the band what is going on.  But each section creates its own little steps or moves or yells with the cadences.  So, sometimes a section will just up and start playing something while no other sections are playing.  Generally, one of the older members of the section will yell out what step or move or yell to use. 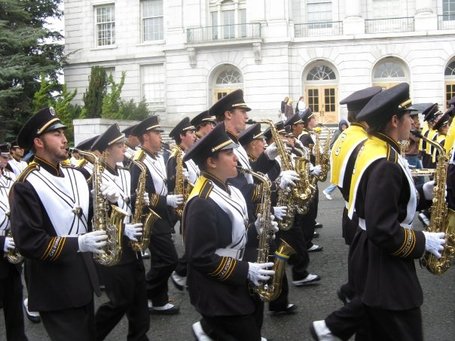 The band will stop at several locations to play a song or two for school spirit.  Similar to the movement of the strings in a symphony or orchestral setting, there is something hypnotic about the trombone slides moving during play. 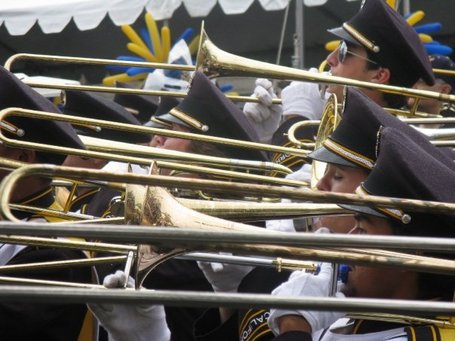 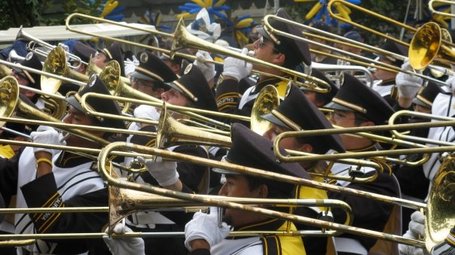 An odd tradition arose around turning a corner near the Campanile. No idea why, but the band just stops yells about Stanford's general sucktitude and then runs to another location.  No idea how long this has been about or why, exactly, but it is what it is. 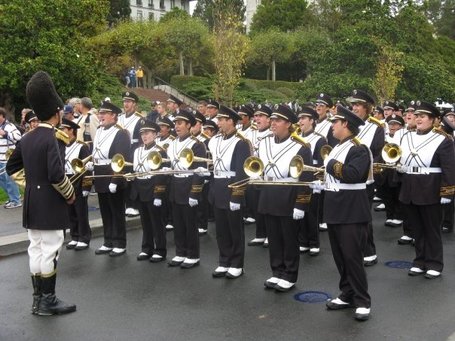 The band then passes through the basses for no real apparent reason. 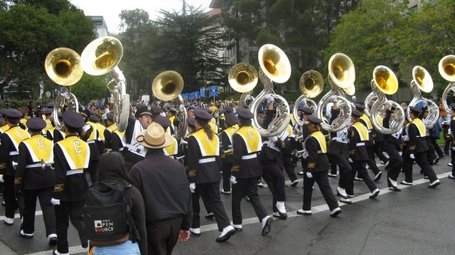 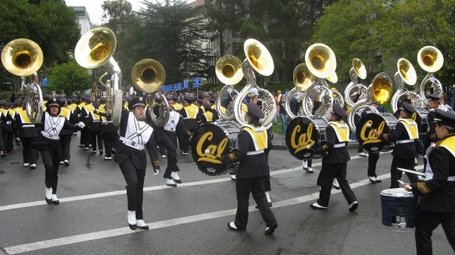 The basses meander in a sort of aimless fashion, following behind, next to, or in front of the band.  In one case, they even block traffic for the band. 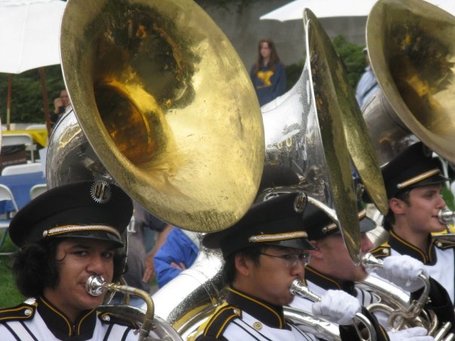 As the band makes its way up to Piedmont, it sings some ODD song about the sinking of Titanic.  No idea how that came about, but it has to have been around for decades and decades.

Yknow, the section I was in was at the back of the procession there, so I never kwite saw what some of the sections in the front do.

Apparently, the trombones run train on the cheerleaders.  Did not know that.  The photo came out blurry, because I didn't see what was going on until the end and then powerwalked up to try to get a good look.  But it appears the trombone, always the suavest playboys around, run up and essentially jump up and down behind the cheerleaders.  It's unclear if any phone numbers were actually exchanged.  Knowing everything I know about trombone players and cheerleaders, I predict none. 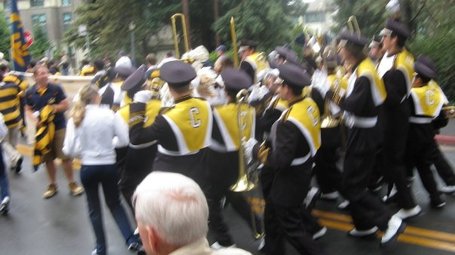 And I never realized that the Drum Major, who appears to be the whitest man alive, dances around in front.  I just sorta figured he walked and looked serious.  That was pretty much the main reason I decided not to be the drum major.  I have trouble looking serious.  And I hate responsibility. 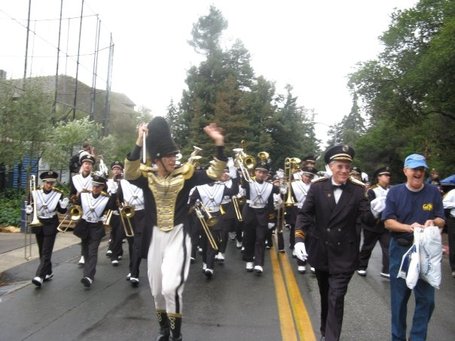 Even the Director got in on the "spastically wave ones hands" action there.  Go Bears!

So, then they come and play for the people at the FunZone at Kleeburger and head into the North Tunnel to prepare for pre-game.  Like I said, I was walking alongside the band entering on the north side and we just walked in.  Nobody stopped us or anything.  So, for all you cheapskates out there, that might be a way to get into the game without actually having a ticket.

The next photo post will be pre-game warm up photos and videos.  You can see what I saw!  Experience what I experienced!  Kill who I killed!  Eat who I ate!  GO BEARS!